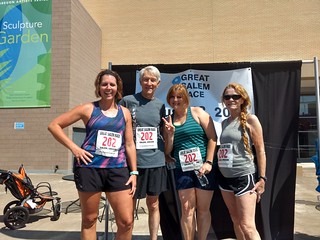 This year I gathered 3 of my friends and we teamed up to run the Great Salem Race – a team scavenger hunt race that sends teams all around downtown Salem put on by the Salem Young Professionals. Since none of my team members were super familiar with Salem, I contacted Travel Salem a couple weeks before the race to get a paper map of Salem. That was a lifesaver! (Thank you, Travel Salem!) This scavenger hunt style race started at the Salem Convention Center. Fortunately, this meant plenty of real bathrooms available before and after the race. We checked in and received race bibs and a sealed envelope containing our clues that was not to be opened until start time. Unlike other races, when start time came we did not line up at a starting line or start running right away. Instead we unsealed our envelopes and began reading clues and making a plan about where to go first. It was a fine line between being eager to dart off after reading one clue and trying to read a few clues to find a couple things nearby to start with.

We opted to start with a trip to a nearby furniture store which required us to blow up 3 balloons each. That’s a lot harder to do when you are in a hurry! Once we achieved our task, we got our clue paper stamped and we were off to the next location. Well, sort of . . . first we reviewed a few more clues and marked some locations on our map to be sure we would be efficient in our running around. Next we ran off to Riverfront Park to identify some tree types. We managed to convince another team to join us in creating a 6 person pyramid and getting a photo in order to check off another task on our list. They agreed to help us out if we would share a bit of information with them. We considered it a fair trade – even though it turned out to be the world’s worst pyramid! 🙂 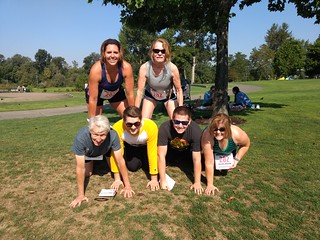 We darted here and there around Salem sometimes finding our location and other times getting a bit stumped for awhile. We found specific pieces of art, earned points with a ring toss, rolled silverware in napkins at a restaurant, learned a Portland Timbers chant, performed some dance moves – questionably, and much more. Admittedly, we got a bit off course when we headed to Pringle Park instead of Pringle Plaza. We ended up getting waved into a building where the people there thought we must be looking for the art sale and after some running about we finally got back on track and made it to try on wigs at a wig store. With less than 15 minutes left, we had 2 tasks to complete and one of those clues had us scratching our heads. We performed chest compressions on a dummy and put out fires (not real ones!) at the fire station and then we were down to less than 10 minutes. We made one last ditch effort using Google and got lucky. We discovered we needed to head to a toy store just a few blocks down. We sprinted down the street, found the location and had to fold 4 card boxes correctly. We busted those out as fast as we could (pant! pant!) and sprinted back to the finish line with just 4 minutes to spare! Whew! Mission accomplished! 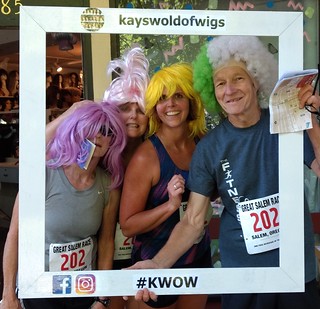 Posing for our photo at Kay’s World of Wigs. Don’t we look fabulous?

We definitely weren’t the fastest team, but we felt pretty good about getting all the tasks completed within the allotted 2 hour time frame. Especially since none of us really knew Salem very well. We got our photos checked and our sheet reviewed to be sure we completed everything and then we enjoyed some cold water and the complimentary ice cream/popsicles for some of us and free beer for others. I was reminded of how much fun scavenger hunt races are. Since so many of them have disappeared over the last few years, it has been awhile since I’ve done one. It was such a good experience and we got in a good 5-6 miles of running – or should I say sprinting, stopping, sprinting, stopping . . . I think I’m going to consider it speed work! I highly recommend you check out this event next year. If you aren’t from Salem, it doesn’t matter. Get a map and just have fun solving clues and running all around town with teammates. I can’t wait to do this again next year!