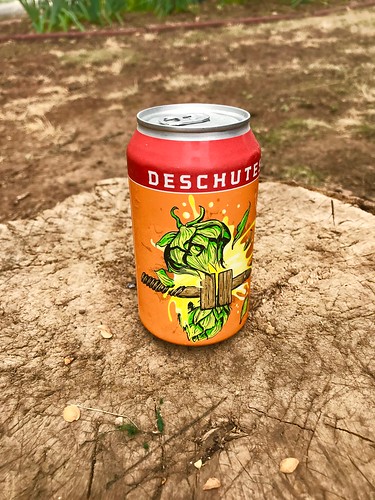 I love beer. After now having visited over 410 different breweries, it’s fair to say I have sampled a lot of beer (follow me on Untappd). From post-race pints and run club meeting locations, to beer miles and relays, running and the kegged nectar seem to go hand-in-hand in Oregon. Our Kegs and Legs feature is where beer drinking runners like me can go to find some new favorite beverages.

In the past few months, we reviewed the new canned beer line, as well as Swivelhead Red, Passionfruit IPA, and Twilight Summer Ale from Deschutes Brewery. Up this month is another new canned IPA – the Fresh Haze Hazy IPA.

Let’s start off again with a little snippet from our previous posts about Deschutes.

The Fresh Haze is a take on the increasingly popular NE IPA. If the packaging looks familiar, it’s probably because it has the same general artwork as the popular Fresh Squeezed version. That’s by design, as Deschutes seems to be building up their portfolio of “fresh” and creating more options in this vein throughout many different styles. This was recently only available on draft in Portland and Bend, but was successful enough to bring to the masses.

This was a nice and refreshing citrusy/juicy beer that brings forward a tropical punch (with Mandarina, Amarillo and Simcoe hops). I found it pretty mild overall, a nice easy-drinking take on the style that is easy to understand why it was hard to keep on tap.