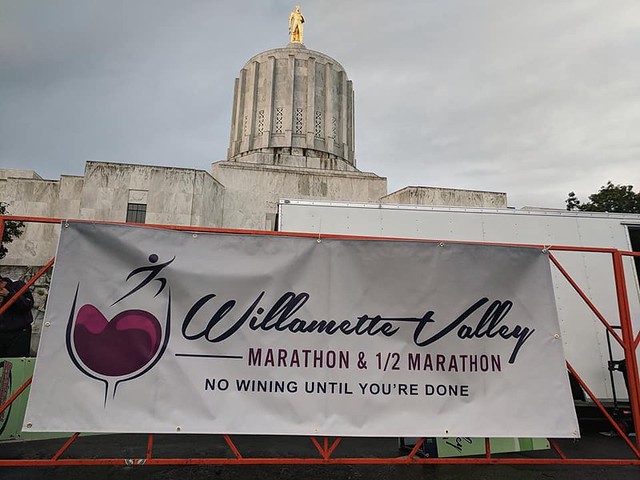 When thunderclaps woke me up from a slumber in the morning of the inaugural Willamette Valley Marathon & Half, I was a little concerned. It felt that all my longer races in 2018 came complete with precipitation, and I was looking forward to have the race showcasing my city be dry and sunny. Overall, the storms stayed away and the weather, while a tad muggier than usual, was almost ideal for running. The day, and the event itself, presented Salem super well and I was proud of my city’s first downtown marathon.

The race start was staged on the mall in front of the State Capitol building. There was plenty of space to stretch, run, and gather before the race took to the streets. Music was playing and a coffee cart was keeping runners caffeinated and warm. It actually hasn’t been all that long since Salem started closing some streets to traffic for running events, but I’m thrilled to see this happening with a little greater frequency. Personally, it was quite fun to race this course. The crazy part is that I run some portion of this entire course every day. It had a different vibe to it, however, and I never got bored, even though I knew every turn like the back of my hand. As we ran through downtown Salem, I smiled to myself at just how awesome the city looked, and thought that, if I had never been here before, it would make me want to return and explore. 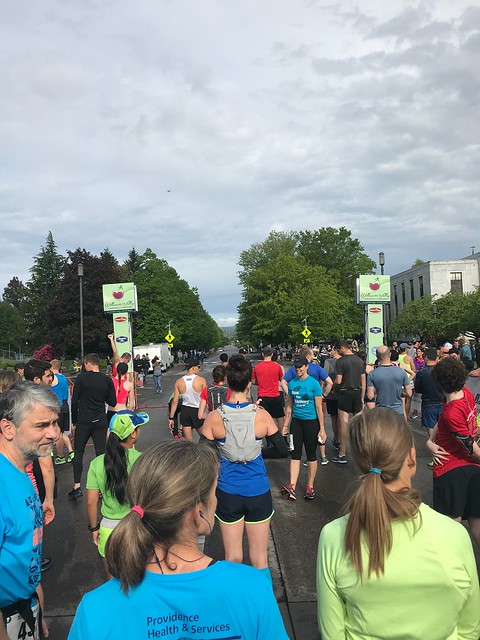 Within a mile we were inside Riverfront Park, the main park in Salem that sits alongside the Willamette River. A quick snaking through it spit us out near the Union Street Pedestrian Bridge, which we crossed to enter the second park – Wallace Marine. Here we entered the first and only section of bark trails – a quick and peaceful section under a beautiful tree-line canopy. This spot can get pretty soggy in the winter and spring months, so I was happy to see the conditions were runnable.

After circling around the park, we returned to the bridge, went back through a spectator-lined section of Riverfront Park and crossed over the new Peter Courtney Bridge that connects into Minto Brown Park (mile 4.8), the premier running location in the city. Minto Brown is actually larger than Central Park in New York and has miles and miles of trails, including paved, bark, rock, and dirt. 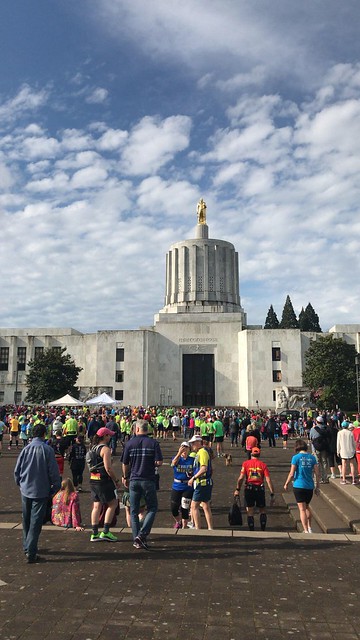 Minto Brown is truly a running gem and I would pit it’s scenery and trail diversity alongside any location in the state. It’s super flat and the majority of the trails were nicely paved (aside from one gravel part near the end). There was initially a section that put us right alongside the Willamette River. This curled into a great spectator spot – a parking lot that offered shade, river access, a covered picnic area, nearby dog park, port-a-potties (year round), and a kid’s play structure. If you are doing this in subsequent years, your support team should definitely plan on making it here to cheer you on.

We headed into the more backcountry portion of the park – still paved but pretty isolated from much of anything aside from the beauty of the trees and foliage. As we came up on mile 8, full and half marathon runners split at the aid station, with 26.2ers heading on west on Faragate Road for their out-and-back on South River Road, and us half-ers heading on Homestead Road for about a half mile before reconnecting with park trails in it’s far SW corner. I looped back and re-fell in love with the paved trails, tackled some very minor rolling hills, and thanked the guards stopping park traffic at about mile 10.5.

The .4 mile gravel section at around mile 11.5 isn’t the most exciting surface to take on this far into a race, but it is what it is. On a side note, I am not clear why the city hasn’t either paved this trail or made it more of a packed natural surface. It is one of the few non-paved portions in the park, and even some “rugged” trails in the NW portion are much more compact and pleasant than this location. I sincerely hope the city has plans to get rid of this gravel sometime soon. However, it was just a small section overall and I hope people don’t hold that against this half marathon course.

The final stretch was a 1.2+ miles or so was a paved stretch back to Riverfront Park on the path we came in on. The view of the bridge, river, Eco-Earth Globe, and downtown buildings is really wonderful on a clear Spring day is really quite nice and a perfect way to finish. We received medals and there was plenty of space and encouragement for all to recover! 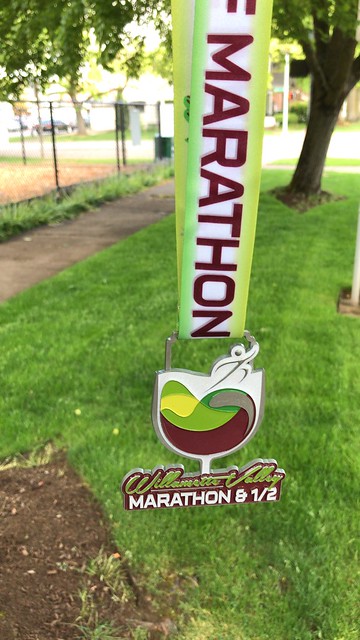 After the race,  massages were being given and all runners received a very nicely catered meal, an event wine glass, and tickets for tasting from 8+ local wineries as well as one of Salem’s best breweries. A live band was playing in the amphitheater. I would recommend parking close to Riverfront Park before the race, so the trek back to your car isn’t so far. However, walking through downtown Salem and exploring local bakeries, restaurants, shops, and our downtown cidery is reason enough to enjoy the stroll.

As I sat down and relaxed in the park afterwards, I just looked around and was fulfilled by the event and the city. Well done Breakaway Promotions and well done Salem. A marathon looks good on ya.