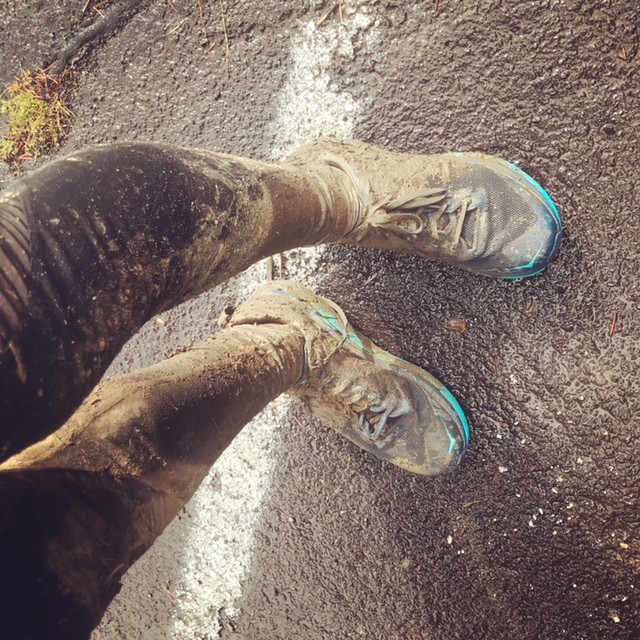 If you are going to run a mud run, you expect mud. Well, let me tell you, the Hagg Mud Run 25K did NOT disappoint on that factor this year. With snow coming down on the morning of the race, it was slated to be a chilly and wet course.

The race kicked off with a loop around the parking lot and then up and around the road before heading into the trails. This allowed for the participants to thin out a bit before being in a single file line on the course. This was my first trail race, so not knowing what to expect, I sat back pretty far before heading into the trails as I didn’t want to hold people up. That was a mistake!

We started the trail off by hitting the infamous “pig pen”.  The pig pen is an area of slippery and deep mud. Immediately people were losing shoes and falling all over the place. This part was a great way to get your feet wet, literally, and get accustom to the mud. If you were planning to stay clean during this race, this immediately would erase those dreams. After the pig pen we ran through the steep ups and downs of the beautiful Hagg Lake Trail, occasionally hitting the paved road for short areas before returning to the trail. Just about all of the course was super muddy and slippery. This provided a lot of technical difficulty and use of stability muscles. For someone like me that loves mud, I was having a blast. Going up the hills you would slide backwards, going down the hills you would just slip the whole way down and on the flat parts, you would slosh and slip.

The views during this race are unbeatable. The lake is stunning and with falling snow, it was even more breathtaking. Luckily, it was easy to heat up and stay warm while running and many runners found themselves to be overdressed. There were aid stations along the course stocked with beverages and small snacks. This was a cup-less race, so participants filled up their own bottles at the stations. The volunteers were the friendliest and so cheerful as we came through. As we crossed the finish line, we were handed a cup, a pair of socks, and a hat (way better than a medal!). 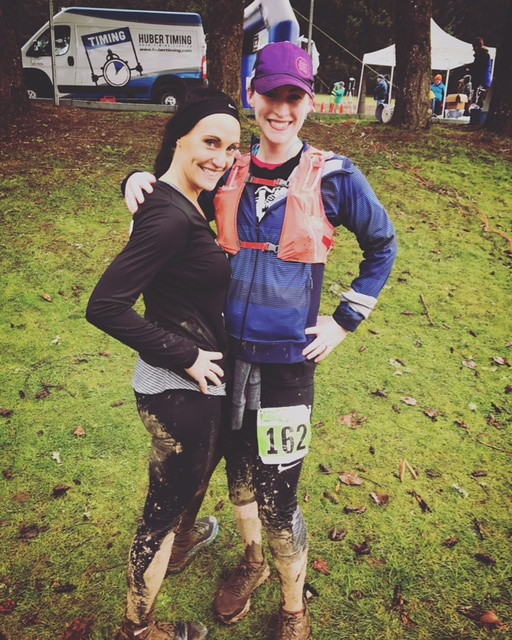 By the end of the race, every single person was caked in mud. The after party was great too, with an awesome array of food and beverages. Most importantly, they had set up a tent with tons heating lamps to keep the runners warm. This was hugely appreciated as it got chilly fast after we finished running. There was also a grilled cheese truck handing out loaves of bread and a sandwich to runners. That was such a nice treat!

As my first trail race, I learned a ton and created a list to document my lessons.  Here is a breakdown of what I learned:

1) Don’t start in the back of a trail race. You will get very stuck, very often.
2) Embrace the mud. This race was extremely muddy, sloshy, wet and fun! There was no way of coming out clean (and who would want to?!).
3) Master the fall. I only fell four times and was lucky to be super smooth and graceful each time.
4) Stability muscles were made specifically for trail mud races.
5) Snow is pretty epic to run through on the trails. And is very cold to wait in pre-race.
6) Learn to slide down hills.

This race was an absolute blast. I wish I could do it again tomorrow. I will definitely be doing it every single year!