Supported by Lincoln high school sports teams and local non-profit groups, the 10th annual Lincoln City Half-Marathon and 10K will be held on Sunday, March 4, 2018. 10 years! It seems like just last year that RD Gail Kimberling was brining this to the masses. It continues to be held the first weekend in March, and though Lincoln City is known for its large sandy beaches, this race heads the the coastal evergreen forests.

The race begins and ends at Taft High School with a scenic, out-and-back course that is a steady climb for the first half and a nice downhill the way back. The race is on two-lane rural roads with only a short gravel portion at the turn-around.

Joe braved some snow and hail last year and had this to say:

Since it was an out-and-back course, I focused on completing the 6.5+ miles to the turnaround. Somehow, psychologically, I figured once I started retracing my steps I could hang on and count down the remaining miles in familiar territory, and the distance wouldn’t seem too daunting. Plus, although it didn’t seem like much of a climb, I knew we were running upriver, and that meant the second half of the race would be mostly downhill.

We got our results tickets from Eclectic Edge, a cup of Mo’s clam chowder, and salt water taffy, and waited for the awards. Brian and the 1st place woman received large colorful glass floats, and the top three finishers in each age group earned nice ribbons. Despite the cold and the dramatic precipitation, the Lincoln City Half Marathon (and 10k) was well-organized, with a nice course and a friendly, fun atmosphere. It’s everything a small town race should be!

This early season Half-Marathon and 10K is a great way to enjoy spring on the Central Oregon Coast. Follow the race on Facebook. 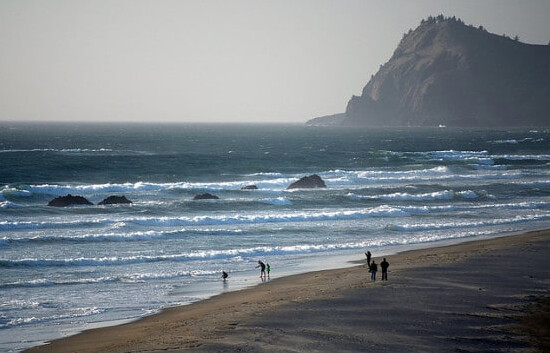 A technical T-shirt is included with registration. Finisher medals will be presented to all participants. The top overall male and female finishers will receive awards, and ribbons will go to the top finishers in five-year age groups for both the half-marathon and 10K.

Race packets are available for pick up from noon to 3 p.m. Saturday, March 3 at the Lincoln City Community Center, 2150 NE Oar Place, and from 7 to 8:30 a.m. on race day at Taft High School.