Thousands of people come out on Thanksgiving morning ready and excited to burn off the huge meal they are about to eat.  It is a holiday tradition with good intentions of health and fitness. However, it can be hard to fit in a race and get home in time to start cooking the bird and preparing all the other dishes, that is why the Les Schwab Tires Turkey Trot Relay and 5K was perfect.  This race was held the night before Thanksgiving and delivered the holiday spirit with a race around the Portland International Raceway decked out in Christmas lights. 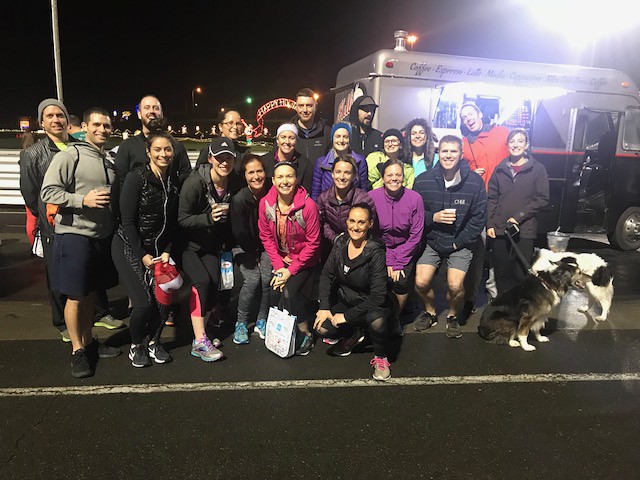 I ran the relay for this event and had about 8 teams worth of clients running the relay alongside me and handfuls of them running the 5K as well, as it was slated to be our big fall run. The weekend before the race, I went to pick up the packet at Fleet Fee and was pleasantly surprised by the race bag which included a cute Turkey Trot mug.  We arrived at the race an hour early and were pleasantly surprised by an awesome array of vendors –  coffee, beer, food – everything we could have wanted.  It was like a post-race party but PRE-race.

The relay consisted of four runners, each of which were to run two two-mile legs. The legs were all the same, a big two-mile lap around the raceway.  I knew there was a baton needed for our relay, but presumed it would be at the starting line. Soon I heard various people chaotically saying we needed to go back to the entrance to grab our baton. We did so, and once again, watched and prepared for the 5K to begin. The 5K started 5 minutes before the relay.  A few minutes later they called the relay runners to the line and without a countdown or much of anything to start it off, they yelled to run and off we went.  I was sort of taken aback because it happened so fast, but I was glad I wasn’t the first runner.

Soon, the relay runners and the 5K runners started to make their way in to the 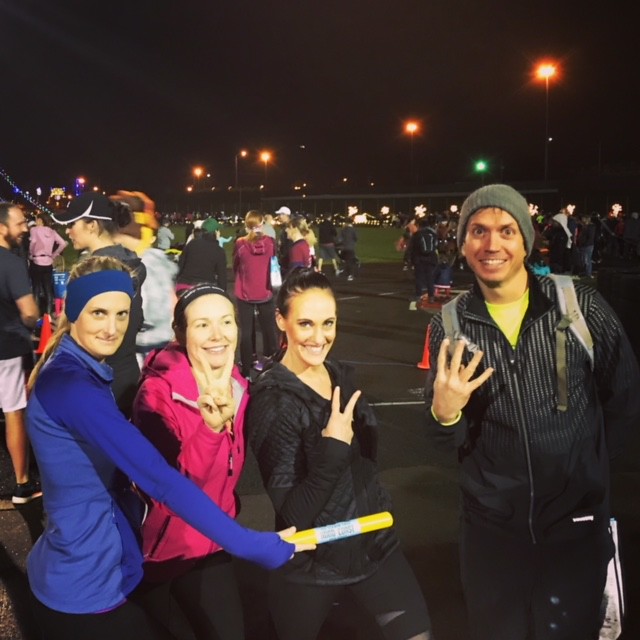 finish line/handoff area. There was a bit of confusion as to where the relay runners were supposed to go but after the first couple runners, we had it down pretty well. It was fun watching the 5Kers blaze in and it was exciting cheering in the relay runners  I was the third runner for our relay, and as the second runner came in, I was terrified by the fact that my husband’s team was also coming in at the exact same time. So, off we went, husband versus wife!

We are both fairly competitive people so we went out fast.  A bit too fast.  As he started to pull away, I was thankful that the leg was only two miles long as I was already struggling to keep my current pace.  The lights were a great distraction and soon we came to an alternating flashing tunnel of lights. It was really neat but I was trying to stick to the inside of the track to hopefully catch my husband. In the dark it was hard to tell there were large cords holding up the arches. So, as I got pretty close to hitting the wires, I was able to detour and run through the tunnel. Competitiveness can be a hazard!

As I continued along the course I passed through the 12 days of Christmas in lights and a field of light up dinosaurs. Finally, I was able to see a straightaway and several arches. Every arch made me anxiously hope it was the end – my quick starting pace had me hurting.  Finally, I saw the groups of runners waiting for their relay members.  I handed off to our final runner and pulled off to find the side of my foot and shoe covered in blood.  My sock had slipped down and I had worn away the skin.  There were no medical tents to tape it up so luckily, one of my relay team members ran down to the entrance of the race where the packet pickup was and grabbed a bandaid from their first aid kit. 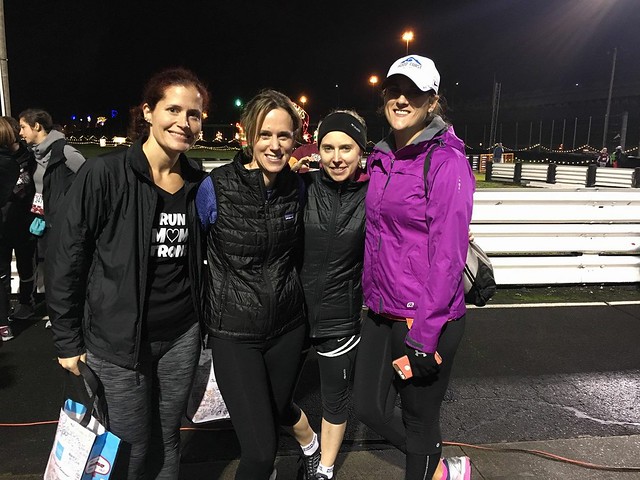 Remember, this is November, and at this point we were extremely lucky to have dry – almost warm weather.  Everyone kept commenting on how perfect the weather was.  And then (of course) it happened… it started to downpour.  It came down hard and fast and people scurried to find tents to hide under. Luckily for the 5K runners, their race was over and all of them were walking off with pumpkin pies and packages of Hawaiian rolls. As we huddled and tried to stay warm,  the timing clock suddenly shut off and finish line was black. Everyone scurried to figure out on their phones when their runner should be coming through. Luckily the rain only lasted about 20 minutes and the timing clock came back on.  At this point, a few of the teams had surprisingly dropped out thinking their time wouldn’t count and they were running laps in the rain for fun and not for competition.

We continued to run and soon my second and final leg came around.  This leg was a lot better, as I went out at a reasonable pace and could better enjoy the lights. I hit the straightaway and handed off to our final runner.  I waited and cheered in our anchor leg and cheered in all our other runners. There was so much excitement and huge smiles on everyone’s face. Despite some road bumps, we all had a really fantastic time. It was fun to run with each other and on such a fun and local course. We were able to pretty much see everyone run at some point and were able to really support our runners.

After everyone had finished, we headed over to collect our pie and rolls. Unfortunately, they were completely out of everything. This was pretty disappointing, especially because we were in the top 10 finishing teams, so we certainly weren’t last to leave.  Afterward, I heard a lot of disappointment as there was definitely more than us that missed out on some expected post-race goodies. I was also bummed, but knew that I would be eating my fair share of food the next day and I wouldn’t let this affect the enjoyment of the race. but I am also really happy with  It was a great atmosphere, awesome vendors, and really fun event. I can’t wait to run it again!