The Molalla River Trail Race was on Saturday September 23rd in the Molalla River Corridor, Hardy Creek Trail head area. This trail race had a 5K, 10K and half marathon option. I decided to run the 10K, partially because I have not done much training on trails for several years and the other part because I had just ran a half marathon the previous weekend. I was looking farward to run this race, because of the challenging elevation gain and the 500 ft. hill climb during the race (I love a challenging hill). At the same time, I was also nervous to run this race, due to an injury (ankle fracture) several years ago when trail running. There honestly is no better way to get over a fear than to just get out and face it head on.

We started by parking at Foothills Church in Molalla. From there, we were shuttled to the Molalla River Corridor. This took about 25 minutes.Once arrived, there was packet pickup, first aid, massages, and gear check. Everything ran very smoothly, from the start. I picked up my packet race day, and made sure I had plenty of time before the race start time. Usually, on race day it is very hectic and chaotic. This however, was ran very smooth. It took less than 5 minutes to pick up my packet and drop my belongings in gear check. The restroom line was much longer, as it always is right before the start time. I was so blown away at how well this event was ran, considering the amount of participants. 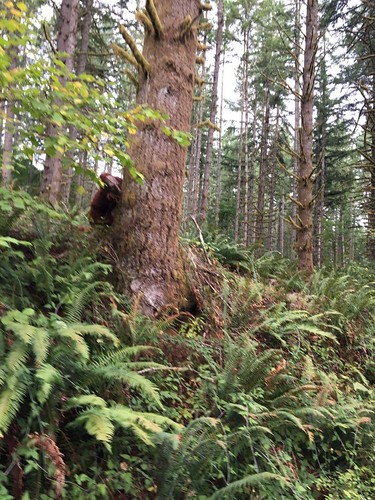 The photo above is one I took during the race. If you look closely, you will see Bigfoot peering behind that tree.

The first event was the Half Marathon, which started promptly at 9:00 am. The 10K at 9:15, followed by the 5K at 9:30 am. I was very impressed at the volunteers and people running the event. The starting line was about a 10 minute walk from where the shuttles dropped us off. We were instructed to wait until each event had already begun, to avoid too many people at the start line area. Once it was the 10K’s turn to run, everyone was placed in different start times, due to the multi-use trail site. There was a great turnout for the 10K, with 3 heats.

The photo above is taken during the race. This is near mile 1. This was at the beginning, it was easy to pass and be passed. Some parts of the course, were very challenging to pass other runners, thankfully everyone around me was very friendly and even went off the trail to let others pass.

The 10K course was scenic, challenging and consisted of rocky/ mud terrain. There was just enough water stops during the race, spread out about every 2 miles, with 3 stops total. Just past mile 2, was a killer hill. I actually was not expecting this until I came to it. It was over 3/4 of a mile. It was extremely challenging, due to the terrain and the length. The rest of the race went by very quickly, the miles just seemed to pass by. It was especially helpful with the course markers and mile marks. Everyone running on the trail was very spread out, which was a concern of mine in the beginning. During the race, I also spotted Bigfoot, catching me off guard. You never know what you will see when running this trail race!

After the race, there was a timing area, which had your results immediately. You can also find results from the race, here.  I was shocked to see that I had placed 22nd overall, 4th for my gender and 3rd for my age group. From the finish line, everyone had to walk the 10 min walk to where the shuttles were. When I arrived I was offered delicious chicken noodle soup and bread from Dave’s Killer Bread. It was the perfect snack after the race. This is also where the massages and first aid was. The awards were directly after the races, which was nice not having to wait. When the announcer announced the winning times, I was amazed at the times. From there, the shuttles were taking groups back to Foothills Church.