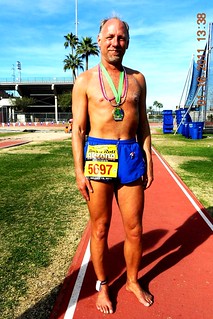 At the 2016-2017 PRC Winter 5k Series, I noticed a guy that I’ve seen around at various races for one reason: he runs barefoot. So at the last run in the series I introduced myself and asked him if we could interview him for Run Oregon. And, perhaps because of my winning smile or irresistible charm, he agreed! (I later learned that he agreed because he’s just an all-around nice guy, but I believe what I want to believe.)

That guy is Todd Byers, a West Virginian who moved to the northwest after graduating from college. His first landing place was Seattle – far away, in every sense of the word. Despite running track in high school, his college running consisted of “sprinting only to the refrigerator and back for beer (then to the restroom),” but in Seattle he started distance running. “I did not know anyone there to hang out with so running was something I could do to stay active on my own,” he explains.

Run Oregon: How did you end up here?

Byers: After graduating from WVU with an Aerospace Engineering degree (yes, I AM a Rocket Scientist – and sometimes it DOES take one!) I moved to Seattle to work for Boeing. I became involved in distance athletics then event production by serving for many years as an Officer and Vice President of the Seattle Marathon Association. Since then I have moved to the technical side of events and am now Senior Lead Timer for the Spartan Race.

Run Oregon: How long have you been running barefoot?

Byers: I started running barefoot in 2003 on the beaches of SoCal. I consider the “real” start of my barefooting events to be my first barefoot marathon which was the San Diego Marathon in January 2004. Since then I have completed over 120 marathons sans footwear.

Run Oregon: What do you like most about running barefoot?

Byers: Well, first I have a lot more money to do other things … and, no, I do not spend that savings on foot doctors! It also like knowing that I am doing something using the body parts as they were intended to be used – and it is freeing to feel the wind on my feet when I run!

Run Oregon: What is the most challenging thing about barefoot running?

Byers: I often joke that the most challenging aspect of barefoot running involves the porta potties at the events. (Oh wait, that’s not a joke!)

Run Oregon: Do you ever run in shoes?

Byers: I wore shoes as part of the company-provided uniform when I coached with Nike. When questioned about it, I always responded “I’m here with Nike!” I also used to run one particular marathon a year with shoes. It was a benefit for a local school district I support and the course was mainly on tank roads. After 26.2 miles, my feet were one big blister. Folks told me that I should train every now and then WITH footwear! Trails, paths, dirt, rocks – they are all more pleasant than tank roads. I run without shoes for no other reason than it feels comfortable, so if it is not enjoyable, I won’t do it. Though I cannot remember the last time I ran with shoes.

Run Oregon: How could someone try out barefoot running while minimizing risk of injury?

Byers: The first thing a potential barefooter should do is learn the proper technique. I realize that sounds silly, but even running small bits without knowing how can be detrimental. There are MANY sources on the internet on how to begin – though, ironically, not many written by people who I personally know who know how to do it! There are also many books on the subject with one of the best being “Barefoot Running Step by Step” by Ken Bob Saxton, one of the first well-known barefoot gurus in the United States. OR you can always try it out with a barefooter out on the road – like me! 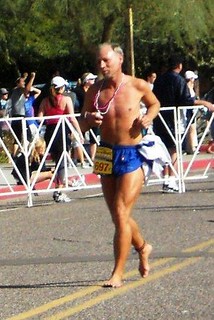 Byers: The longest official distance race I have run barefoot is the marathon (now over 100 times!). Those are in addition to a couple hundred other marathons WITH shoes, so I am not opposed to footwear. As the Head Coach for the Long Beach Team in Training team, I ran with and supported members of my team in the Los Angeles Marathon for well over 40 miles on the day. Most of my triathlons have been unshod as well – except for the Ironman. I think they may require that you have shoes with you there.

Run Oregon: What is your favorite race?

Byers: Kinda depends on the defining criteria. I like only some “crowded” races, but the New York City Marathon and The Marine Corps Marathons are among my favorites. Local Portland races are gaining more ground with me as well as I pay even more attention to the beneficiaries and the fun activities associated with them (ugly sweaters, unique venues, visits from Santa, etc).

Run Oregon: What inspires you to keep running?

Byers: I always thought only old people said they continued running enough to avoid being in worse shape. But now that is one of my main reasons to keep moving – to stay fit enough for years to come to be able to run and do other athletic things which I enjoy. Maybe I am just getting old!

Well, if that’s getting old, we have hope for the future! If you see Todd at a race, go up and introduce yourself – he’s a really cool guy!