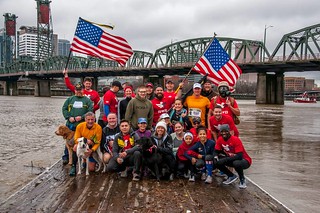 I’m sure you’ve seen them: Runners decked out in red, white, and blue gear with an American flag held high above their heads as they run … these are the runners (and walkers) from Team RWB.

Back in February when I ran the Three Capes Relay at the Oregon Coast, I was struggling up a big hill when a powerfully-built guy with an impressive beard caught up to me and then, probably concerned for my well-being as I huffed and puffed, ran with me and chatted. I noticed that his shirt had the RWB logo that I’ve seen all over, so I decided to ask him about it. I’m glad I did, because Team RWB is doing amazing things for America’s Veterans! And, I made it up the hill.

The runner was Chris Winson, originally from Tucson. He was a Paratrooper with the 82nd Airborne Division from 2004-2009 and served in two deployments to Iraq. He works at the Portland VA Medical Center in their Biomedical Engineering shop; his ultimate goal is “making the VA a better place for Veterans to receive their care.”

So how’d he get to Portland? “I decided to follow a couple good Army buddies who were originally from Portland; they spoke very highly of this place,” he explains.

Since the Three Capes Relay is a pretty small relay, I ran into Winson later in the day and was able to get his contact information for an interview for Run Oregon. He explained Team RWB’s mission and make-up to me: 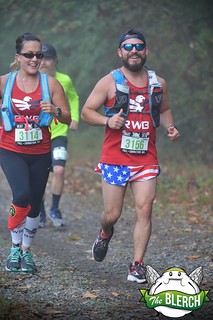 Winson, along with Crystal Mai Purdy, at his first full marathon, Beat the Blerch.

Run Oregon: What is RWB?

Winson: Team RWB is a worldwide not-for-profit organization whose mission is to enrich the lives of America’s Veterans by connecting them to their community through physical and social activity. About half of our events are running events, but there is everything from knitting meetups to rock climbing to just meeting for a bite to eat. Events are posted on our Team RWB Portland Facebook page here.

Run Oregon: Can anyone join, or only vets?

Winson: Veteran and non-Veterans are welcome, and can sign up for free at teamRWB.org. Veterans will receive a free Team RWB t-shirt.

Run Oregon: What sort of reaction do you get from people at events?
Winson: By choice, many Team members will run an event carrying the American flag. We often get a very positive response from the community and fellow runners around us. I wear the “eagle” (RWB logo) and run with the flag with great pride. Team RWB is also involved in a number of events in the community often related to the well-being of Veterans in our communities. Again at these non-running events we always get a great response from the people around us.

Run Oregon: How did you get involved?
Winson: A good friend of mine that I served with who is now living in Texas recommended that I reach out to my local chapter. I found the team through Facebook and last Veteran’s Day I ran my first 5k with the team, the National Veteran’s Day 5k. That year, I made it a mission of mine to run my first half marathon. I ended up running 13 half marathons and one full, Beat the Blerch, this last September in Seattle. Without a doubt, the team motivated me and got me somewhere I don’t think I could have gotten without them. 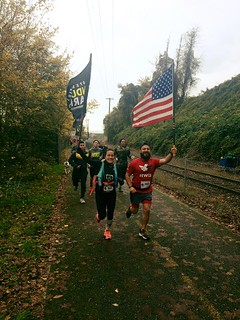 Winson and Purdy running in another event, flags held high.

Run Oregon: Tell me about how your athletes take care of the flag during events.
Winson: Flag etiquette is important: one’s flag may never touch the ground. We often will keep them rolled up when not being flown during the event. We are sometimes asked to raise our flags at the start of a race for the national anthem. Again, carrying a flag is by choice, but I can promise you, that even simply being by someone who is carrying a flag during an event, you will be irradiated by an enormous amount of pride, patriotism and motivation. There’s something magical about it.

Run Oregon: If there was one thing someone could do to help RWB support Veterans, what would that be?
Winson: Be involved, reach out to us, say hi at events. I promise we are all normal people just like you.

During my mile running with Winson, I also found out that no one should ever feel like a dork thanking a Veteran for their service. Just say it like this: “Thanks for your service.” They’ll be glad you did.