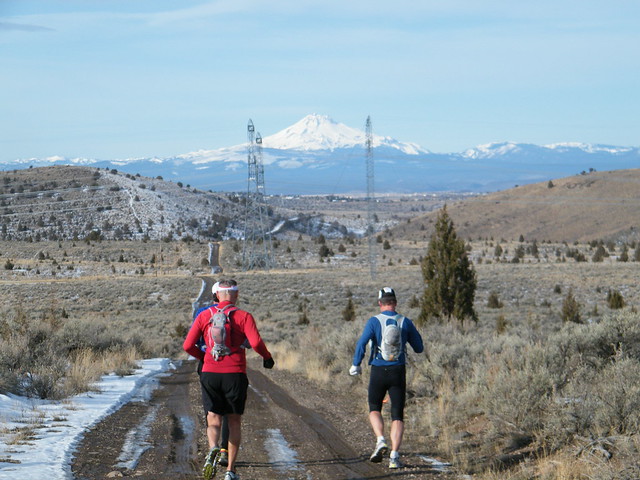 Typically races that have been around for 12 years are pretty well known. However, if you don’t reside in Central Oregon you may not be fully informed on the Mad Ass, an event that comes on the last Saturday of January each year. It’s low-key but continues to grow without losing it’s local feel.

This past year (2016) added a new route for a portion of the race. About 2″ of snow fell south & east of town, which had the unfortunate consequence of covering the flour arrows marking the new route. Nearly all runners missed the right turn up the hill, and ran back to the Aquatic Center along Grizzly Road. Same distance, 14.2 miles. However, the snow melted by 10:30am and runners enjoyed sunshine and mid-40 temperatures the rest of the day! Check out the 13.8 mile loop and the 16.1 mile out-and-back (through Willow Creek Canyon), both of which can be combined to achieve just shy of a 50k.

The race starts and finishes at the Madras Aquatic Center, where there is a potluck meal immediately after the run. There will be no aid stations and no pre-registration, so just show up on race day ready to go. There actually isn’t an official fee, but a suggested donation of $20 would go to the Jack Watts Memorial Scholarship – which benefits high school runners in Jefferson County.

Check out the Facebook Event for updates and info.