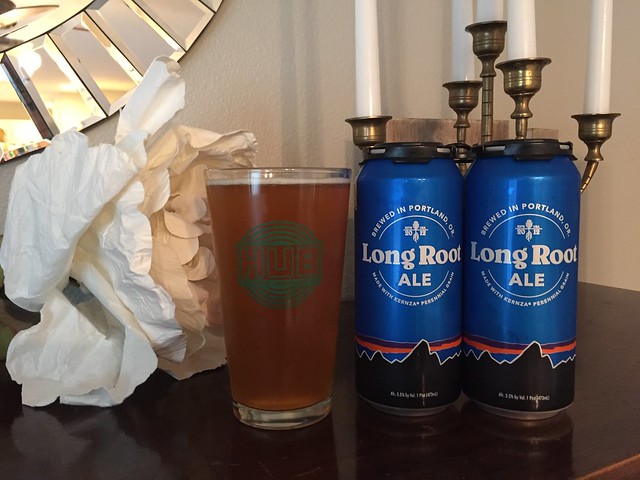 I love beer. After now having visited over 230 different breweries, it's fair to say I have sampled a lot of beer (follow me on Untappd). However, I am definitely not a beer cicerone. I just swig, sample, and move on. As a result of my simple tasting abilities, we are partnering with Barrel & Keg, Salem’s great beer and wine bottle shop / taproom (home to Salem’s first and only food cart pod), and their beer guru Kelsey (who goes by Kelso). She will be providing some more technical feedback on the beer of the week. From post-race pints and run club meeting locations, to beer miles and relays, running and the kegged nectar seem to go hand-in-hand in Oregon. We want to highlight a new beer each week that arrives to the B&K shelves (and may be able to be located in your local shop). Check out previous posts here! Beer: Long Root Ale Style: Specialty Grain Pale Ale Brewery: Hopworks Urban Brewery (SE Portland)

First – a little background on the collaboration between HUB and Patagnonia.

Patagonia Provisions worked with The Land Institute in Salina, Kansas on a major breakthrough in organic regenerative agriculture with Kernza, the perennial grain used in Long Root Ale. Kernza grain is ideally suited for organic regenerative agriculture – its long roots and perennial growth allow it to thrive without pesticides, it uses less water than conventional wheat, helps to reduce erosion and removes more carbon from the atmosphere than annual grains. And it just so happens to make delicious beer.

About a year and a half ago, Patagonia Provisions reached out to Hopworks to partner with them in the making of a new beer. “I was shopping in a grocery store when I received the initial phone call from Patagonia Provisions,” says Christian Ettinger, brewmaster and founder at Hopworks. “It was a surreal moment because it was hard to believe that a company that I look up to as a business owner had just dialed my number and asked to make a beer with us. That week we met up and our team learned about Kernza for the first time.”

Read more about the Kernza grain and Patagonia here.

Matt: It really only makes sense that a beer creation idea from the always sustainability-minded Patagonia would be a collaboration with HUB. In addition to award winning beer, HUB also is recognized for being committed to the environment – from sustainable building construction to a water initiative to a goal of zero-landfill waste.  As you can see above, there is a lot of great stuff going on.

Sometimes something new to a food or beverage can be a great idea, but can fall flat when it comes to taste. I expected a noticeable flavor difference with the 15% added Kernza, but honestly, it just tasted like a really good NW Pale. I don’t feel I ever would have known the difference if I was drinking this blind. It tasted mildly grapefruity – my favorite kind of hopped flavor – and was very smooth.

Let’s hope the big beer manufacturers take note and see how they may be able to do more good in their beer creation practices!

Kelso: I’ve had pale ales that have blown me away and made me question my shrine to brutal hops and the reality in which we live: I’ve also consumed pale ales that I forgot about ten seconds later (like anything my self control tells me when there’s an open bar or snacks around). Hopworks Urban Brewery’s Long Root Ale fell in the middle of the spectrum scoring “Yeah, I drank it. Tastes good.”

A pleasant grapefruit floral bouquet coaxes you in with familiarity and doesn’t disappoint in that department. Everything you want in a pale ale, it’s crisp, it’s bitter and there’s a malt backbone which doesn’t steal the show, but keeps the whole structure intact. The Chinook hops contribute a bitter herbal earthiness and the crystal hops work in conjunction with the premiere grain, kernza, to impart a slight spiciness to the profile. I actually really enjoyed what the kernza had to say. Reminiscent of the effect of using rye with barley, the kernza barley combo offers a sharpness and a dry finish that I wouldn’t kick out of bed for eating crackers.