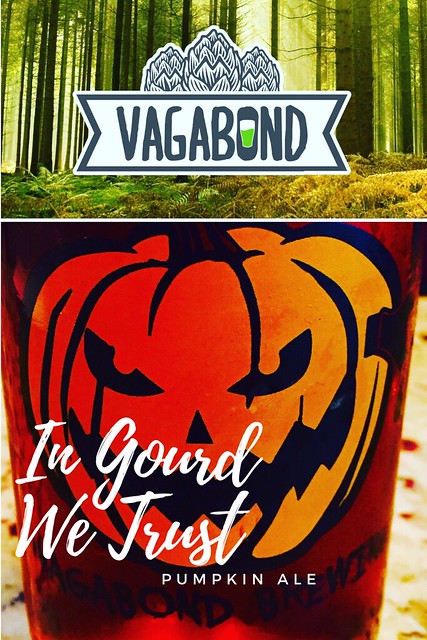 I love beer. After now having visited over 230 different breweries, it's fair to say I have sampled a lot of beer (follow me on Untappd). However, I am definitely not a beer cicerone. I just swig, sample, and move on. As a result of my simple tasting abilities, we are partnering with Barrel & Keg, Salem’s great beer and wine bottle shop / taproom (home to Salem’s first and only food cart pod), and their beer guru Kelsey (who goes by Kelso). She will be providing some more technical feedback on the beer of the week. From post-race pints and run club meeting locations, to beer miles and relays, running and the kegged nectar seem to go hand-in-hand in Oregon. We want to highlight a new beer each week that arrives to the B&K shelves (and may be able to be located in your local shop). Check out previous posts here! Beer: In Gourd We Trust Style: Pumpkin Ale Brewery: Vagabond Brewing (Salem)

Matt: Perhaps it’s blasphemous to say this in October, but I’m generally not someone who enjoys pumpkin-flavored food or drinks. I will taste them as they come, but I definitely don’t go on PSL binges at Starbucks or anything like that – beer included. I am generally a bit ho-hum on pumpkin-flavored beers. I classify most as “fine”, but my palate finds most of them overspiced.

I sampled this week’s featured beer while it was (and still is!) on tap at Barrel & Keg. I figured a series about beers should probably showcase at least one pumpkin beer during October – and this was it. I was EXTREMELY surprised as to how much I enjoyed this!

I found it “lighter” than most pumpkin beers – simple in the tasting profile, less spice-heavy, and a really easy drink to put down. It had that taste of gourd and nutmeg, yet I felt it was almost a perfect balance, as it avoided being overpowering. I easily finished a pint at the bar and picked up a growler to go as a result.  It was easily the best pumpkin beer I have ever had. In Gourd We Trust is not available in bottles, but can be found in most tap rooms in Salem (come to Barrel and Keg!) , as well as Eugene (they had a recent tap takeover at The Bier Stein).

Kelso: Pumpkin season, what a delight. The gourd beers are ripe for the picking ranging from sour lacto pumpkin specialty beers to ink black imperial pumpkin porters. Every year our PNW’s own Elysian Brewing puts on a beer festival dedicated to pumpkin beers, much like their head brewer, and people are encouraged to drink pumpkin brew which has undergone secondary fermentation in the same massive pumpkin dispensing the dark sienna goodness. Every piece of the gourd is up for consumption in ale form this season: flesh, seeds, pulp, and even the stringy brains. It’s hard to be upset when you’re drinking a pumpkin-forward beer. The warm spices of cinnamon, nutmeg, and clove warm you from the inside out and, if the goal is such, liquefied pumpkin pie transports you to boxing out family members for the last piece while Uncle Fluffy yells profanity at the competing football teams. Ahhhh memories… What? You don’t have an Uncle Fluffy?

One of Salem’s own breweries, Vagabond Brewing, graced our presence with a lovely, mild and incredibly drinkable pumpkin ale with a cheeky name, In Gourd We Trust. Weighing in at 5.1% ABV and a barely noticeable 25 IBU, this is a sessionable pumpkin beer lovers dream. Pouring a beautiful dark ruby hue and served in an adorable pumpkin glass, courtesy of Vagabond, you’re greeted with pumpkin spice blend on the nose. Shy roasted squash and pumpkin meat meets you at the door and sprinkles you with more spices. Although not overwhelming at first, the smooth gourd mouthfeel and sweet roasty, caramel flavor intensifies sip after sip almost as if they roasted pie pumpkins and butternut squash and added them to the mash. Overall a delightful mild gourd focused beer to keep you toasty and toasted while the weather and the trees wave hello to autumn.