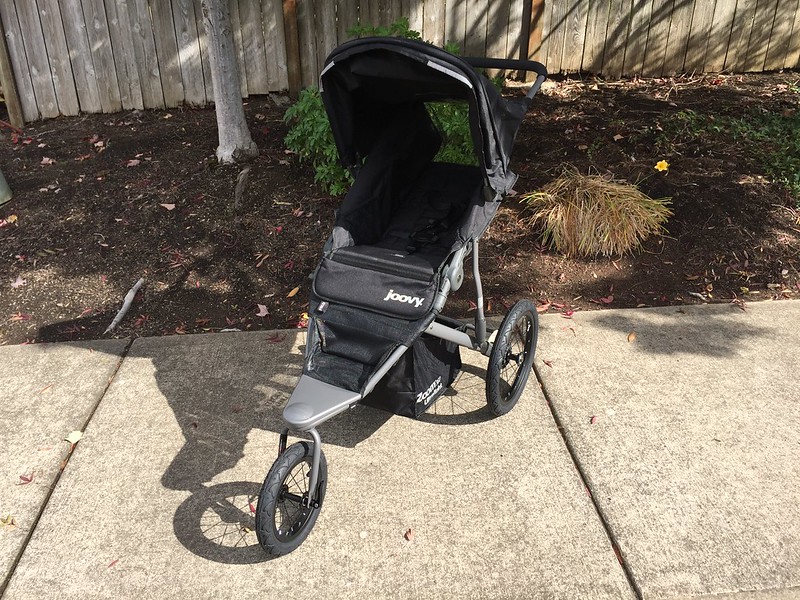 For those of you who may not know me personally, I have a 7 and 4-year-old, and now a new little girl on the way in October. We currently have one running stroller in our family (which we reviewed back in 2014), which is still going strong. However, with a growing family, and an increasingly-interested-in-running wife, we needed to add another to our arsenal. Thanks to Joovy for providing us with their newest running stroller - the Joovy Zoom 360 Ultralight, complete with a car seat adaptor for still-unnamed baby #3. With a 7-year-old (who just completed her first non-stop 5k, and two running strollers, we will be a family to be reckoned with.

This post will highlight my initial impressions in the few days since receiving it. I will be following up with an additional post after I have had the opportunity to put some miles on it.

Sturdy enough for a child up to 75 lbs.

Look: The stroller definitely is sleek-looking and the neutral color scheme is much appreciated. It comes three different colors (red, blue, and black) and looks great.

Set-up: As is the usual for me, I think I ended up making set-up a little more challenging than it needed to be. The wheels went on easily enough, but I really struggled with figuring out how to open the thing. It’s mildly embarrassing, but I just couldn’t figure it out at first. I was tugging on this and that – all while trying to be delicate with my new “toy”.

What I initially love:

To be honest, aside from safety, this is the feature that I look to the most. The rest of the stroller positives and drawbacks are just ancillary pieces. I want to be able to 1) make sure my kids are safe and 2) have a ride that isn’t going to cause me to expand unnecessary energy by fighting against the stroller. I am a few short runs in and my initial feedback is EXTREMELY positive so far. Basically, the Zoom is super smooth. Even when maneuvering over curbs, as well as on uneven paved landscape and rural trails, the impressive shocks have been a highlight

While I now have a newborn to run with, I still (at times) push my 7-year-old and 4-year-old when I am racing and on dad duty. Both of my older kiddos are tall and are a little cramped nowadays in our previous running stroller. The seat appears to be a bit wider and they definitely have a little more headroom up top, which I know they appreciate.

While I struggled with the initial folding (see above), once getting passed that I was impressed with the way it folds. It’s weight is not too different from what I am used to and it folds up nice and flat (for a stroller). It also locks in place when folded, which is not the case with all running strollers. I will note that folding takes two hands to accomplish.

This is so simple, yet one of my favorite features. I can’t tell you how many times I have gotten to a race only to realize and wish that I had been diligent in pumping tires the night before. Now, I don’t have to worry. Awesome!

I loved this addition – which can hold water and keys – and also has a zippable pouch to keep things a little safer when it rains. It is removable, which means that it can be utilized when my wife is taking the little one out for a stroll, but easily removed when I am racing.

While we were given a Zoom to try, this price point makes purchasing a lot more bearable than most others out there. It sacrifices a little on the luxuries that some other big-ticket strollers have, but keeps the important features at a more manageable cost.

My guess is that the reason for the lower price tag is changing up some things to make the Zoom more cost-effective. Compared to other running strollers, some of the minor things appear to be:

Here in Oregon, the weather is always an unknown. I wish that the pocket underneath was able to be covered, as I know I have been grateful to have a place to keep extra clothes securely dry for post-race. While some reviews have praised the Zoom for it’s storage space, I found the pocket a bit smaller than what I was used to. Maybe that’s just a “me problem” however. It will do fine for a medium-sized diaper bag or a variety of clothes, food, and toys.

This isn’t something that is really necessary, but I find that I push a little differently when walking than when I am running. As a taller guy (6’2) I have always liked strollers that have the option. That being said, the bar placement is actually OK for me and won’t hinder my running form. I also am a solid believer in having straps on my running stroller. It sounds weird, but that was one of the better features of my previous stroller.

(Updated on 11/1/16: After Joovy read our post they reached out to say that a wrist strap was supposed to have been included. They sent one out to me shortly afterwards and it is now attached! I was also sent a rain cover to try as well.)

While the actual back of the seat is padded fabric, when the child seat becomes reclined, the exposed material is mesh. I am sure this will be great for airflow during the summer months, but may necessitate a blanket on the back when the weather is chilly (which I mostly do anyways).

Those aside, these are relatively minor and would even probably be considered “luxuries”. None of them actually have me concerned, and honestly many of these probably don’t really matter to most of us out there.

I view the Joovy Zoom Ultralight as budget-conscious and multi-functional. Running strollers can easily be twice as costly as this one, and while I am one who tends to be willing to pay a little extra for an item I know is going to last, I do realize it’s not that easy to just fork over $400-$500 willy-nilly. Obviously the $299 price tag is by no means a drop in the bucket, but it is one of the less expensive models in this category. You may also be able to re-sell it in the future and recoup a small chunk of the money as well.

Speaking of budget-friendly. The car seat adaptor ended up being less expensive that I anticipated. At less than $40, it is a great addition to make sure you maximize your running time and stroller-life. While we have a new Chicco carseat ready to go, it appears to be compatible with a ton of the top name brand carseats and utilizes the seats latches to click into place. I also appreciate that the stroller can still fold up after each use without having to remove the adaptor.

Overall, my first impressions have been extremely positive. Our newest baby has just arrived so we will report back in a few weeks for an update.