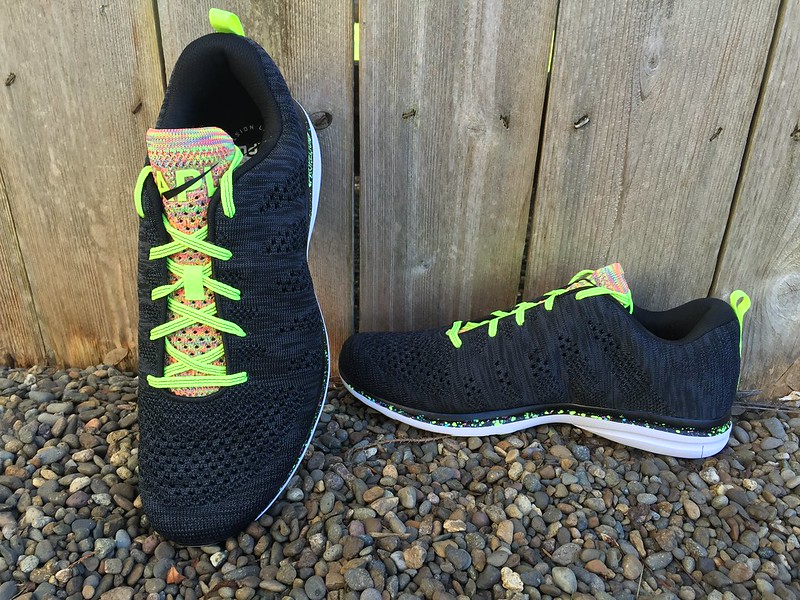 It isn’t too often that you get to try a shoe that was banned by the NBA, right?! Though the ban was lifted shortly thereafter, the thought was that their Load ‘N Launch technology (found in the APL Windchill shoes) a competitive advantage. However, the TechLoom has a little different construction than their Windchill model – called Propelium Technology This technology has been refined and is described as such:

Propelium is a unique compound developed by APL for use in its EVA running shoe midsole and outsole on the Joyride and TechLoom Pro models. The material is designed to provide enhanced cushioning, shock absorption and energy generation, while extending the life of the midsole structure. Propelium should help the running shoe midsole maintain a higher level of structural integrity through extended use by the runner.

I felt they fit more snug at initial wear than most of the shoes I have tried, which is definitely not a bad thing. Actually, I guess I felt these fit more true to my actual size than many shoes do – meaning that the toes on my size 12 feet feel closer to the end than others. If you are used to a little extra toe room, I would consider going up a half size.

The knit appearance actually is constructed from the namesake TechLoom technology (see definition above) – a seamless with a specially made mesh construction under the knitted top. Even the tongue is knit, but in my casual wearing I have found it to stay in place more that I figured it would. The shoes are also surprisingly lightweight (given that the mid and outsoles are combined, eliminating excess mass.

From a visual standpoint, I am absolutely OBSESSED with the look. There are a variety of different color options, but this one (Black/Multi) is my favorite. It is probably the running shoe that looks least like a running shoe. Any number of the color schemes of the TechLoom (combined with the knit look) could easily be paired with a pair of jeans for casual wear.

We will be exploring the feel of these in more depth in a follow-up post and I can’t wait to see how these handle some runs over the next few weeks!