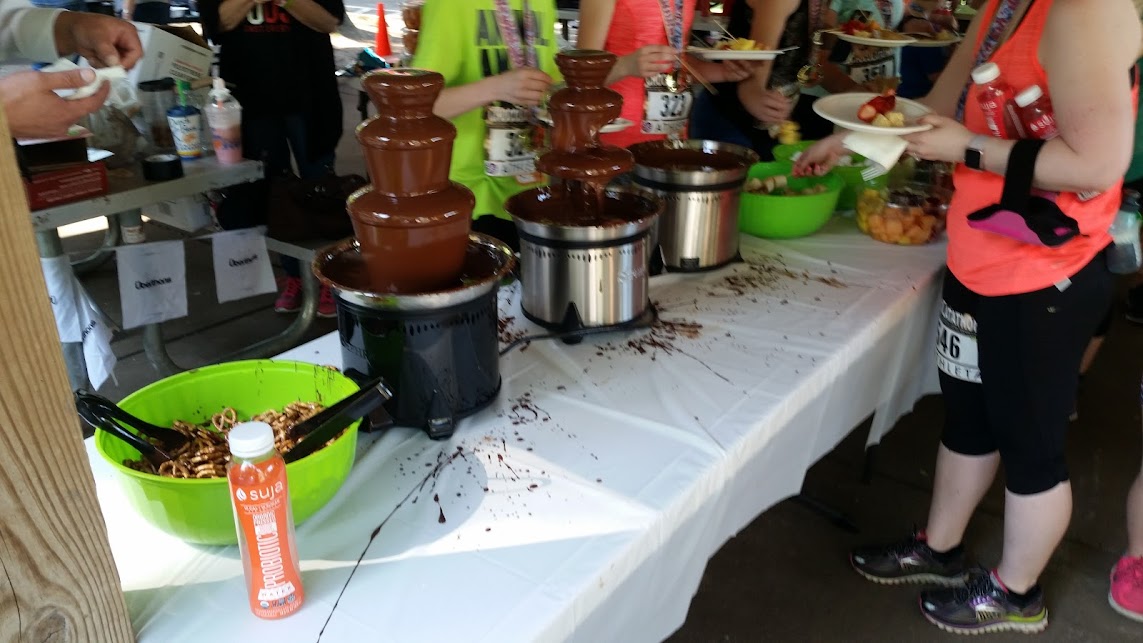 Do you run for chocolate? (photo by Tung Yin)

Up until now, the go-to race in the Portland area if you want a post-race sugar rush has been the Ho Ho 5K. This year, a worthy addition emerged, as Uberthons unveiled a brand new race, the Chocolatathon, that promised to be chock full of chocolate goodies, and it definitely seemed like there would be another sugar fix race in town. How sweet was the Chocolatathon? Let's find out!

Pre-race packet pick-up took place at the Athleta store in Bridgeport Village two days before the race. (Athleta has stepped up its sponsorship of Uberthons events and is the supplier of the awards given to top finishers.) I didn’t get a chance to make it, but with the race not starting until 8:45 a.m., I figured I would have plenty of time to get my bib on the day of the race. It further helped that I was planning to get there early to help with the pancake preparation,* and that the race had sold out a couple of days earlier, having hit the cap of 400.

* It being Mother’s Day weekend, Uberthons had asked male runners if they wanted to volunteer in some fashion at the race.

Saturday, May 7, was a warm morning, already over 60 degrees before the start of the race. I woke up already wearing the Team Uberthons tech shirt (available for purchase or with payment for six 2016 Uberthons events) and skipped breakfast as I was not feeling hungry; I had gorged the night before at Fuddruckers. Hey, don’t wedge cut fries count as carbo-loading?

Anyway, I checked in with race director Darwin Rasmussen and began assisting fellow runner/volunteer Ross Crowley, among others, in preparing the first batches of chocolate chip pancakes. I had an easy task suitable for my low level of culinary skill – squeezing the handle on the pancake batter container to deposit said batter on the hot grill. Someone else even dropped the chocolate chip bits into the batter on the grill. I waited a few moments, then flipped the pancakes, and then added them to the trays when they were done. 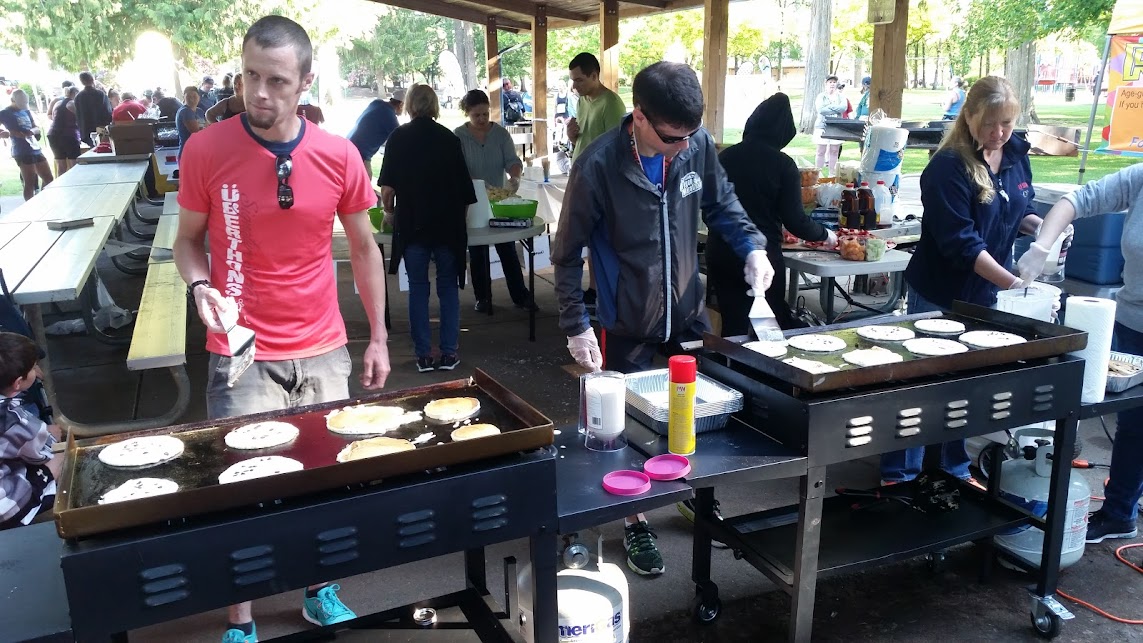 At about 8:40, I headed over to the starting area. This is often the time of maximum chill at races, standing around and without generating any body heat from physical exertion. (Check out the photo of me, shivering at the Luckython just seven weeks earlier, to see what I mean.) There were no such problems on this day. It didn’t feel overly warm, but it certainly wasn’t chilly.

We started in one continuous wave, 5Kers and 10Kers, which meant there was a considerable amount of clogging on the relatively narrow path at the beginning (especially since I had stationed myself somewhere around the middle of the crowd). I more or less walked past the start line before finding some running room. Over the next half mile, the path opened up for freer running. 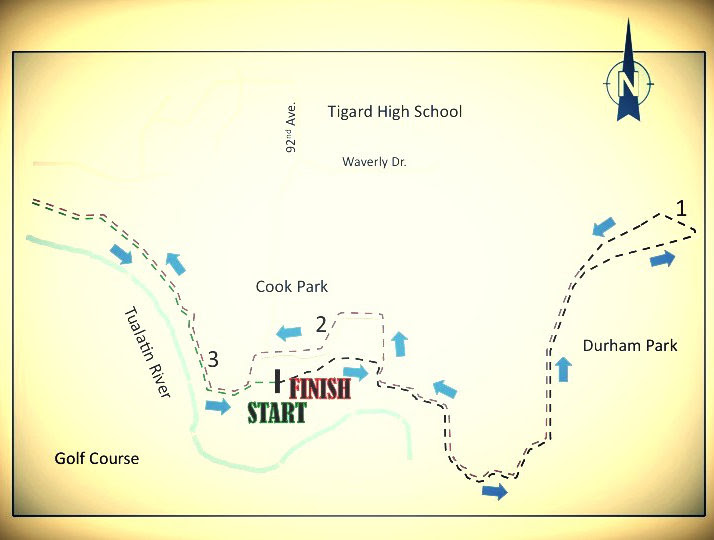 The Uberthons Cook Park course stays entirely on paved ground and is mostly flat with a short climb and then drop of about one story around the 1 mile mark. There’s a variety of scenery during the 3.1 mile course, from open grass to secluded woods in Durham Park, to the kids’ playground and baseball fields in Cook Park. 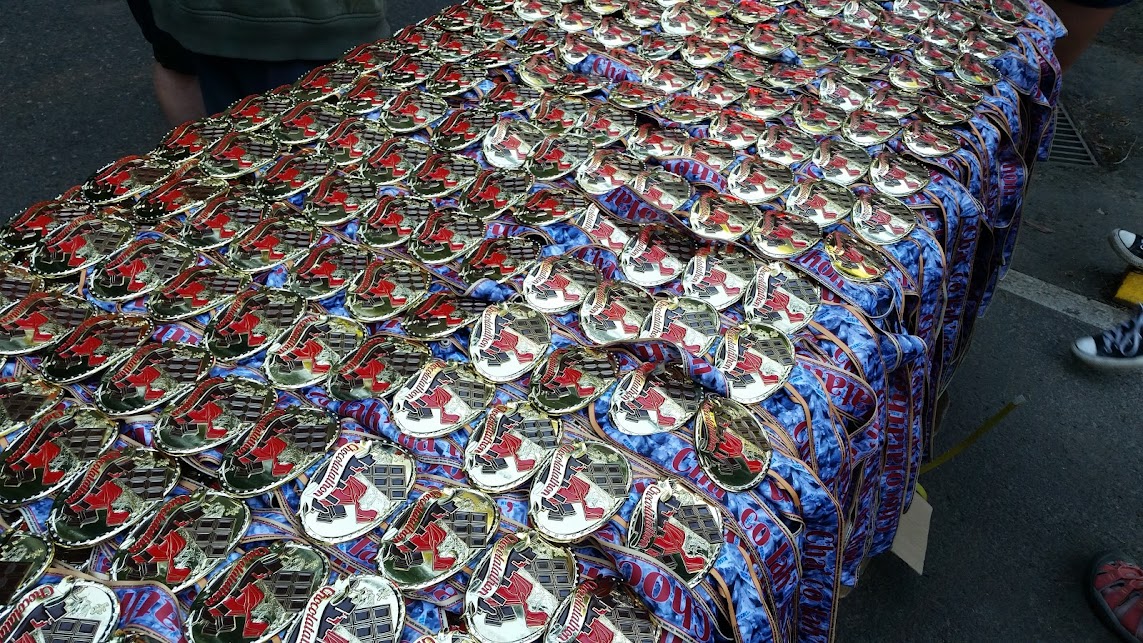 With 90 people finishing the 10K (and having to go through the course twice) and over 250 finishing the 5K, the path seemed like it was continuously filled with Uberthoners. On top of that, with the two turnarounds (at 1 mile and 2.5 miles), it seemed like I kept seeing many of the same runners, both ahead and behind me, over and over.

It was all good. Optimal running performance would’ve called for it to be about 10 degrees cooler than it was, but I doubt anyone was going to complain about the gentle warmth. I was enjoying the happy atmosphere and the fact that I was running smoothly, if slower than my peak level (2013-14), without any complaint from my Achilles tendon. 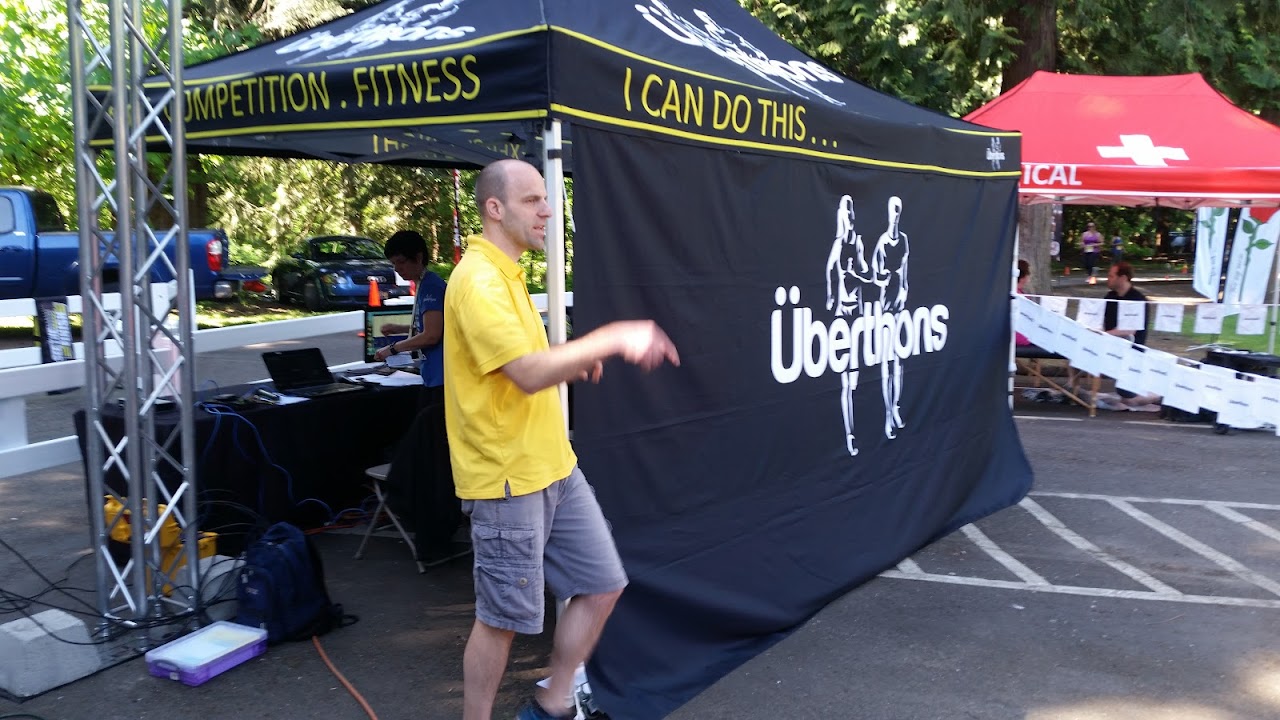 I completed the first 5K loop and stopped to take a cup of water from a race volunteer before starting the second half of the race. It was probably getting a bit warmer (especially since it reached close to 90 degrees later that afternoon), but Cook and Durham parks offer enough shade on the paths that it didn’t feel different from the start of the race. Then again, my individual miles splits for the second half were slower than those for the first half.

You might imagine that the thought of indulging in the delicious chocolate treats waiting at the picnic area would’ve been strong motivation to finish the race with a flourish. 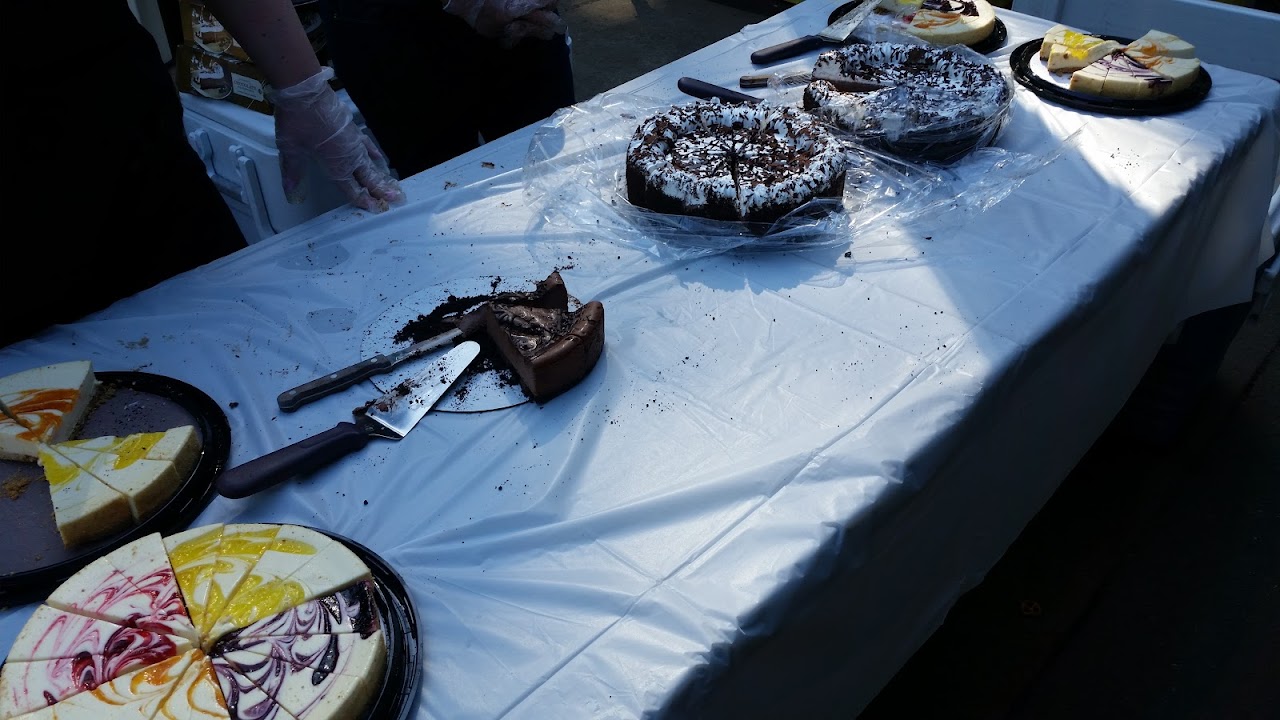 Do you run for cheesecake? (photo by Tung Yin)

I guess that makes me a bit unusual. I don’t dislike chocolate (although my taste runs more toward white chocolate, which I have been told by chocolate lovers is not “real chocolate”), but I’m not gaga about it. And I’ll eat pancakes, but the only breakfast food that I really crave is anything having to do with potatoes.

So, no, the chocolate treats did not provide me with any extra motivation to finish strong. Yes, I do recognize the irony of running a race called the Chocolatathon without really liking chocolate. I guess I’m more about the running than the treats…. 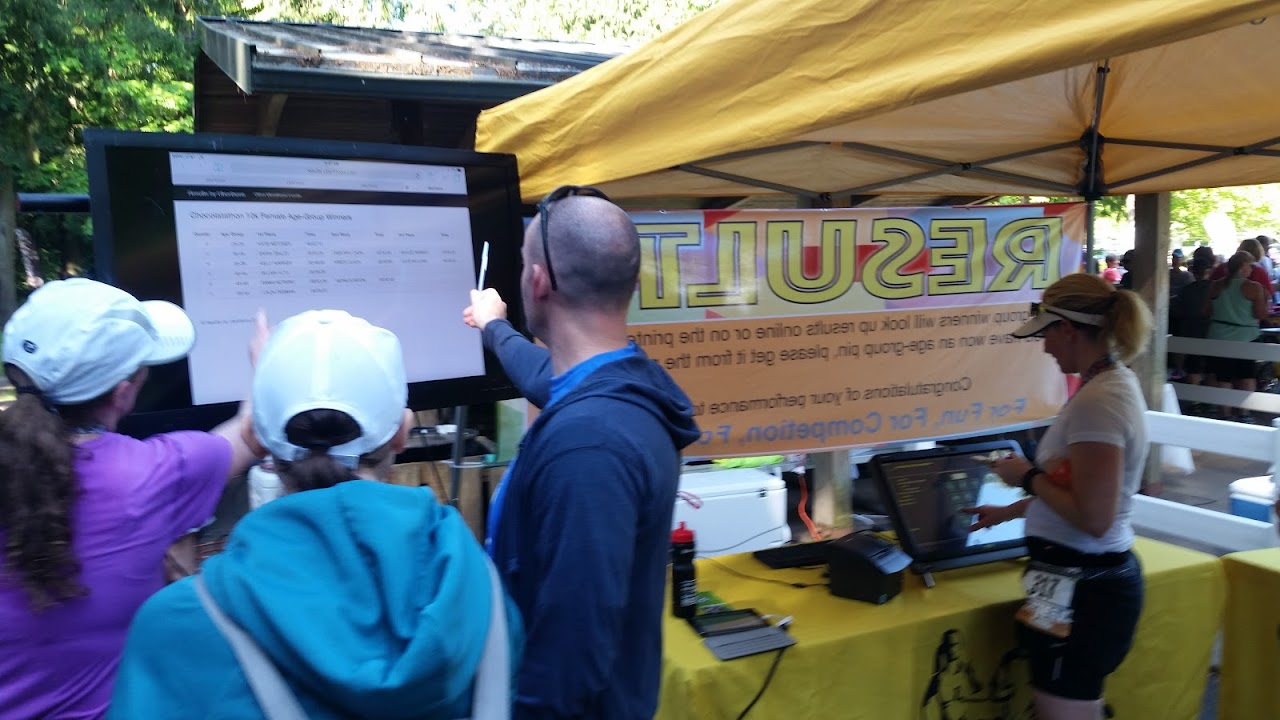 Finally, I hit that turnaround in the northwest tip of the race course. Only about half a mile left! I had been trailing a woman for the past ten minutes, not falling behind (except when I stopped to tie my shoelace), but not making up ground either. With the end in sight, figuratively not literally, I stepped on the gas. I didn’t manage to catch up but did have a decent finish with a quasi-sprint at the end.

At the finish line, one volunteer handed me a finisher’s belt buckle/medal, and another one gave me a bottle of Suja water. (I’m not a connoisseur of flavored water so it’s hard for me to review this product; I tend to prefer plain water or soda.)

As is typical at Uberthons events, instant results were available at a results kiosk. Eileen Kuffner and Brent Huber were manning the kiosk, congratulating age group winners, and directing them to their gold, silver, or bronze pins . I’m still trying get back to my peak form, but I finished second in my age/gender group, so I got a silver pin.+ Not only that, but I also finished second in the male 45+ category to score one of the Athleta-provided medals. (Technically, I was third, but Jerry Mullins finished second overall, so he got a medal for that, and Uberthons doesn’t allow “double dipping” – so I moved up a spot.)

+ Unlike the Double Five Challenge, where I finished third in my age/group, but out of a total of three, this time there were actually more than three runners in my category.

Here’s a look at the bling – you’ll see that my bib is intact, with the rip-away bottom ticket for the chocolate bar still attached. After I finished the race and chatted with various running friends, I saw that the line for the chocolate bar was getting quite long. Not only that, despite having skipped breakfast, I had zero appetite; and I had to get home to take my son to his sporting activity. D’oh! 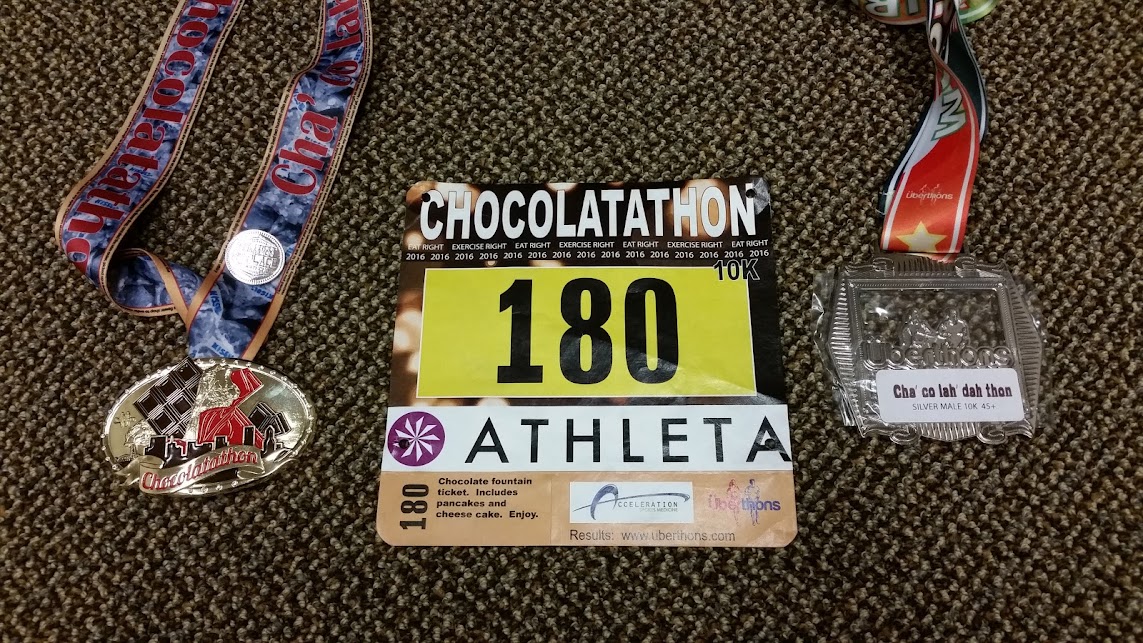 My haul from the Chocolatathon (photo by Tung Yin)

Conclusions: Uberthons delivers a consistent, familiar, excellent racing experience, with well-marked courses staffed by volunteers, plenty of refreshments (on and off the course), eye-catching race bling, frequently tasty post-race spreads, and an all-around good time for families. This was a new event in the Uberthons line-up, but having staged so many past races at Cook Park, it went smoothly. The race cap of 400 registrants might have been as high as possibly feasible, though; the paths at Cook Park can accommodate two-way traffic, but just barely; that is the price of putting on popular races!

Results/photos: Full results for the 5K and 10K races in a searchable format can be found here. Lots of photos can be viewed here.

Disclosure: I’m one of the 2016 Uberthons Race Ambassadors and received a comp entry to this race.