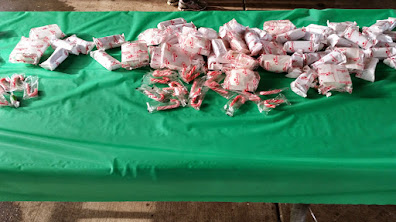 When you think of the Ho Ho 5K, it wouldn’t be surprising if HoHo’s come to mind. After all, when Hostess declared bankruptcy back in 2012, the burning question for this race was, what would take the place of HoHo’s, and would the race have to be renamed in the future? As we know, however, private investors bought the rights to various Hostess brands and brought back Twinkies, HoHo’s, and other tasty treats.

All of which is a long way of saying that the Ho Ho 5K, an annual jingle bell run put on by X-Dog Events, continues to deliver what it promises: a nice 5K, unhealthy treats, hot cider, and tree seedlings for finishers.

This race had a 10 a.m. start, but I still cut it close, arriving at Cook Park a little after 9:45 a.m. I was able to register as the Run Oregon representative, drop off the couple of cans of food that I brought for the food drive*, and get to the start line in time to hear (sort of) the pre-race announcements. Adhering to another Ho Ho race tradition, the race officially started with Santa Claus leading us along the course in his “Sleighbaru.”

* Every year, the Ho Ho race serves as a food drive. Race director Kevin Foreman announced that this year’s race brought in over 1000 pounds of canned food.

This works because, unlike most other races taking place at Cook Park, the Ho Ho 5K doesn’t stay inside park grounds. The start of the course is a short, steep rise of about 70 feet toward Tigard High School along SW 92nd Avenue. , There was a lot of clogging at the beginning, but that hill rapidly spread runners out. At the first left, which was SW Millen Drive, yellow cones indicated a turn into the residential neighborhood.

Early into the race, my left shoelace came undone, and I debated whether to stop to re-tie it. I opted to keep going. Later, a trio of runners passed me, and the woman in the group called out, “Your shoelace is untied!”

Not long after, though, around 1.25 miles, I stopped at the bottom of a steep descent (just past where Santa had parked his Sleighbaru and was now cheering runners) to tie the laces.

At that point, I had reached the Tualatin River Trail running parallel to the Tualatin River. I was feeling a bit of stomach distress here, which was odd because I was running on an empty stomach, and my pace was definitely slowing. I kept plowing on, however, and the discomfort went away. Perhaps not coincidentally, that was another runner passed me, but not before offering me the can of beer that he was holding. (I’ve heard of the beer mile, but is there a 5K variant?)

The later parts of the Ho Ho course are twisty, with a couple of out-and-backs. The first of those took us into a parking lot by the part of the river with a small fishing dock; and the second was the (in)famous false finish: 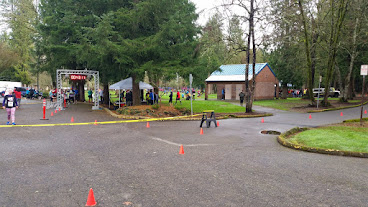 Yep, as you hit the final stretch of the run, you can almost taste the finish line, except what’s that yellow tape blocking the way? And why are there orange cones directing you to the right?

Ha ha ha! (Or should I say, ho ho ho!) Having run this race a couple of times before, I was prepared for this false finish. Having a GPS watch also eliminated any unpleasant surprise about having to keep going.

Speaking of GPS watches, mine recorded this race at 2.9 miles, as did another runner’s. But race director Foreman said that they had measured the course with a wheel and even added an extra 270 feet to bring it up to the full 5K distance compared to last year. It’s not unheard of for forests to interfere with GPS signals, and while I did feel slower than what I’d hoped for on this race, my mile splits according to my watch had me slower than 10K pace for mile 2, and slower than half marathon pace for mile 3, so something was definitely off there. On the other hand, my finishing time would tie my PR for a 5K, so . . . I’m not sure how to report the actual distance.

Anyway, there were plenty of HoHo’s and those white coconut ball treats (Sno Balls?), plus water and hot apple cider. Not long after, an entire group of runners swung by the false finish, and I noticed that they were wearing shirts numbered from 1-12:

The 12 Days of Christmas running group (photo by Tung Yin)

They were gracious enough to pose in order(!) for a picture. You can’t see it in the photo, but the tenth runner has a sign identifying him as the Lord of the Dance. In addition to this holiday-themed group, there were plenty of runners wearing Santa hats, helping this race live up to its claim of being “the most festivious of events.”

I’ve now run the Ho Ho 5K three times in the past four years (I skipped last year, when it was held during sub-freezing temperatures) and always enjoyed the experience. It’s a nice little race in a convenient location (plenty of parking and bathrooms at Cook Park), with good post-race treats. The race course is interesting and a bit different from the typical ones at Cook Park.