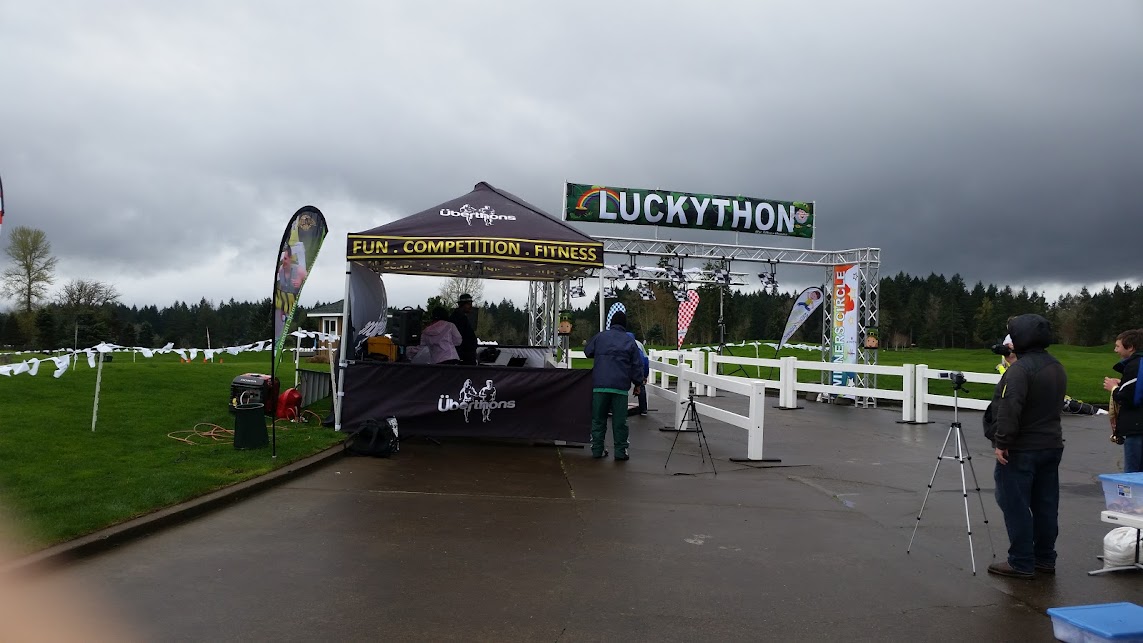 I don’t race as often as some other Run Oregon bloggers, but even so, it’s hard to believe that I haven’t run a race since the Turkeython back in November, due to nagging Achilles tendinitis in my left ankle. I’d stayed active in the meantime with a lot of rowing on a Concept2 erg while re-introducing running on a limited basis. I had hoped to make my running debut at the NewYearathon … and when my Achilles tendon still felt tender at the beginning of the year, perhaps the Mommathon …. But no, the Luckython ended up being my 2016 racing debut.

Race time was 9 a.m. (except for an extra 5K starting at 8 a.m.), so I didn’t worry about getting to bed too early on Friday, and managed to play a couple of games of Race for the Galaxy against my brother before calling it a night. When I got up a little before 8 a.m. on Saturday, I opened the window in my bathroom and thought that it seemed relatively mild outside. As a result, I dressed lightly in just shorts and a neon green longsleeve tech shirt. (That I had an appropriately colored tech shirt was just by chance; while I have lots of tech shirts, most are either black or blue.) I did put on a Uberthons running jacket for the drive to The Reserve Vineyard and Golf Course, but for the race itself, I had only a single layer.

Brrrr! The ambient temperature was around 40 degrees, but the wind was strong enough to knock down the timing clock a couple of times just while we were waiting for the race to start, so the windchill must have been pretty brutal. During this time, I caught up with some familiar faces – Ross and Kirsten Crowley, Brent Huber, among others.

Race announcer Margo Glass suggested that we sort ourselves by expected race pace, starting with the 5 and 6 minute milers. No Uberthons race would be complete without the usual Darwinisms (from race director Darwin Rasmussen):

I normally try to position myself in the second wave at Uberthons races, because I like to avoid as much clogging on the course as possible, but because I don’t match up with the truly fast (elite and sub-elite) people in front. On this day, however, I delayed myself into the third wave, as I was a little concerned about my overall conditioning.

Sorry Ducks fans, this looks like a beaver to me….

As I noted in my preview of this race, the course was a familiar one, having been used on numerous occasions during past Uberthons events at The Reserve, most recently the Halloweenathon. The one wrinkle was that the 2016 Luckython was staged in a clockwise rather than counterclockwise direction.

When Darwin gave the go-ahead to my wave, I took off in pursuit of the second wave of starters. I always start races too fast, and apparently the three months off from racing did absolutely nothing to ameliorate this tendency of mine. I soon paid the price for the fast start. Stationary rowing is a pretty great full-body workout, but it truly does not substitute for regular mileage and speed training. I felt good for about half a mile before the pace started to get to me.

Meanwhile, the announcer had warned us that there were water hazards on the course, this being Oregon in the late winter. She wasn’t kidding. There were several spots along the way, all helpfully identified by hazard cones, where puddles of water had accumulated on the path. One downside of wearing lightweight racing shoes like Saucony Kinvaras is that they cut down on weight by having sides that are more or less mesh, meaning that your feet and socks get soaked when you stomp through a puddle of water…. Other than my feet, though, I wasn’t feeling cold any more. That advice for runners about dressing as if it’s going to be 10 degrees warmer really works.

I’ve run Uberthons races at The Reserve so many times that the north and south courses are both quite familiar to me, so much so that I don’t really notice the scenery as I’m running. Because the course twists around in several spots, however, you do see other runners on the course either one turn behind or one turn ahead of you.

The water/aid station came up around 1 3/4 miles into the race. (In retrospect, I’m curious how much water was handed out on this morning.) I didn’t need water, but I was feeling the need for a bathroom…. And sure enough, just before the two mile mark, there was a porta-potty just off the course(!). Between being a bit de-conditioned and feeling the gastro-distress, I was tempted to stop, but I plowed on.

With just half a mile or so left (roughly where the beaver’s tail joins the body on the course map), I occupied my mind with the lyrics to Taylor Swift’s “Shake It Off“:

I could keep going, but I’ll spare you the rest. I didn’t get to the rapping part, though.

As I approached the staging area, there was a divider – 5Kers to the left to the finishing area, and 10K/15Kers to the right to repeat the course. The 10K may be the best distance (imho), but for this day at least I was quite pleased to be finishing up. A race volunteer draped a finisher’s medal – a Luckython belt buckle! – around my neck. 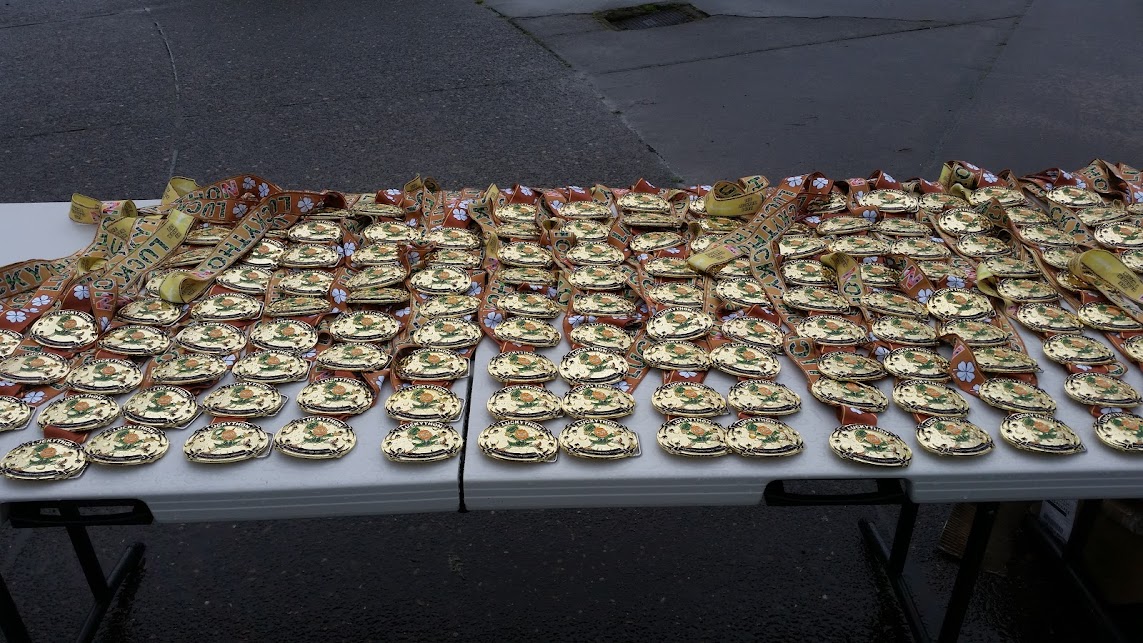 You want a finisher’s medal? Uberthons has a table full of ’em…. (photo by Tung Yin)

While waiting for race results, it was time to eat something. The Luckython has traditionally come with a baked potato bar. There were plenty of volunteers inside the tent because the potato bar came with a whole bunch of toppings: broccoli, beans, cheese, chives, and bacon, in addition to bananas and orange slices. 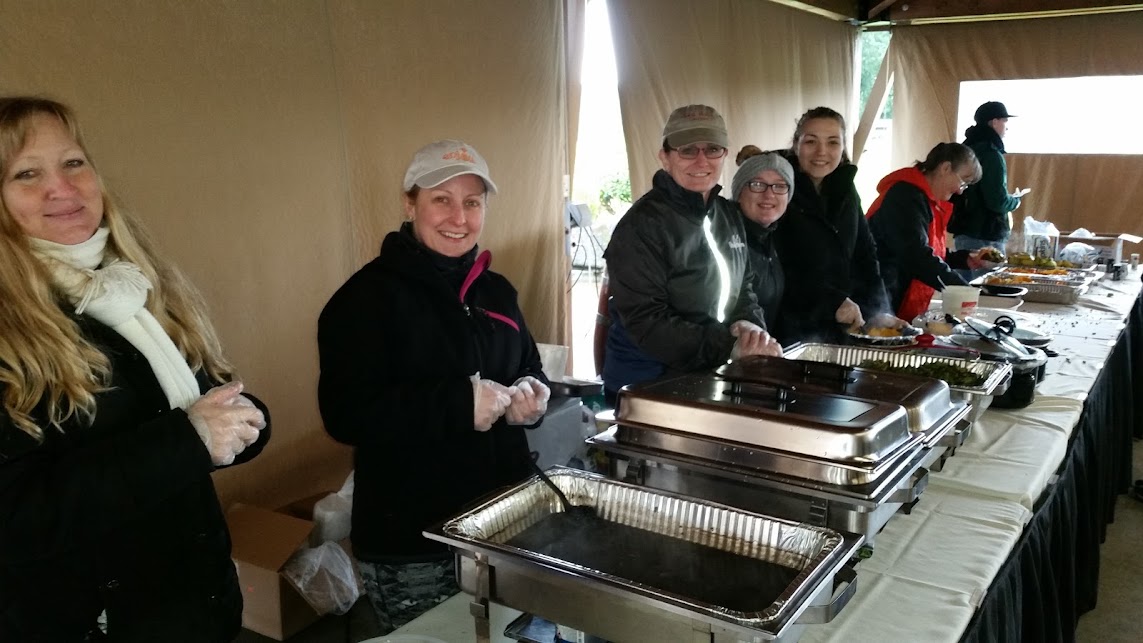 You want fixings with your post-race baked potato? (photo by Tung Yin)

Every finisher got one of those belt buckle/race medals. First, second, and third place in the age groups got gold, silver, or bronze pins. And in a new development, overall first, second, and third place in the under 45, 45-65, and over 65 groups got separate medals, courtesy of Athleta. As for me, the time off from racing definitely showed in my results, as I was slower than any non-obstacle 5K since early 2012 – coincidentally also the Luckython. But I managed to finish second in my age group, and third in the 45-65 male 5K category. 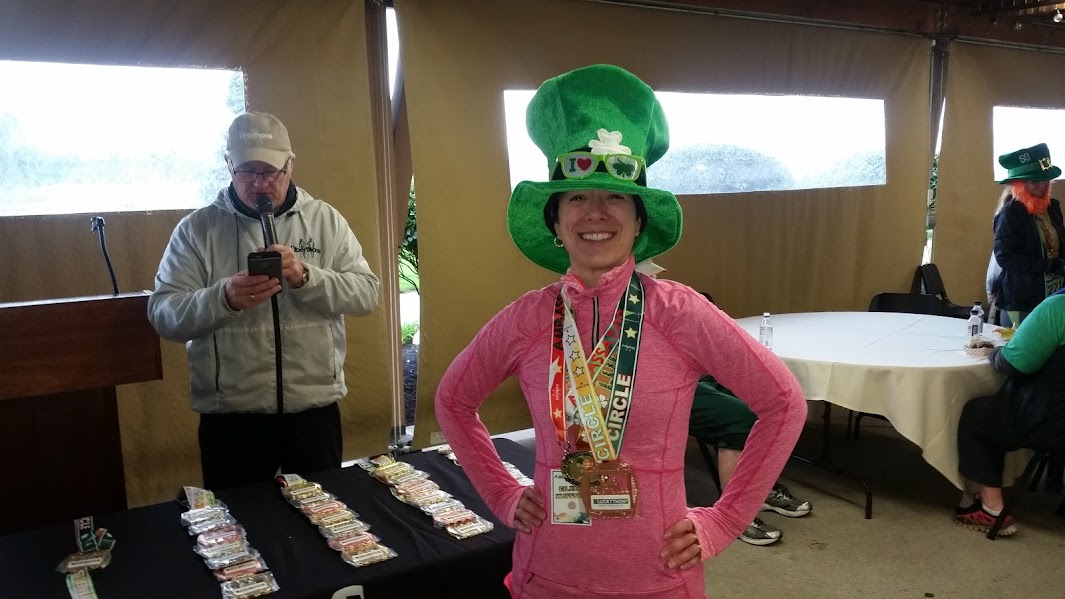 Mid-March is a dicey time of year for outside running, and for some reason, the Luckython has seemed to take place in cold drizzle every year. Apart from feeling the brutal windchill while waiting for the race to start, though, it wasn’t too bad. The big tent with the potato bar, results kiosk, and award pins kept the wind away, and there were several outdoor heaters turned on to keep things reasonably comfortable. Having us run the course clockwise instead of counterclockwise was a good choice; for those new to Uberthons events at The Reserve, it probably made no difference, but for those of us who are familiar with the course, it changed things up. I found myself flipping the course around in my head while I was running to try to remember what would be coming up ahead.

For full results of the 5K, 10K, 15K, and kid’s 1 mile races, click here. The results database can be organized to search by gender and/or age group within each race distance.

You want a 10K recap?: Julie Mullins (another Uberthons Ambassador) has one here.

You want pictures?: Uberthons has posted 1000(!) pictures on its Facebook site; if you were there in Aloha, you’re bound to be in at least one picture. Those plus more are at Smugmug. (The ones on Facebook can be downloaded for free, while the ones at Smugmug have a small fee.)

You want more Uberthons?: The next Uberthons race will be the Chocolatathon, on Mother’s Day at Cook Park in Tigard.

Disclosure: I’m one of the Uberthons 2016 Race Ambassadors and received a comp entry to this race.