New race courses are always fun to run, especially in towns that I don't know very well. It's sightseeing with a group of your friends who you don't know yet. The Sweetheart Run in Sweet Home OR on Valentine's Day weekend caught my interested as a small town race in an area that I have previously only visited during the summer months. It did not disappoint! Full results can be found here. Thanks to a 10:30am start time, I didn't have to leave home until after breakfast. Getting to Sweet Home, I found parking right away next to the library, which was one of the parking lots designated in the email I had received a few days earlier. The start line was just two blocks away, where packet pickup went quickly, vendor browsing was interesting, and I dropped my raffle tickets into one of the prize jars. Since the start line was in a city park, there were flush toilets available, in addition to the porta-potties brought in for the event. 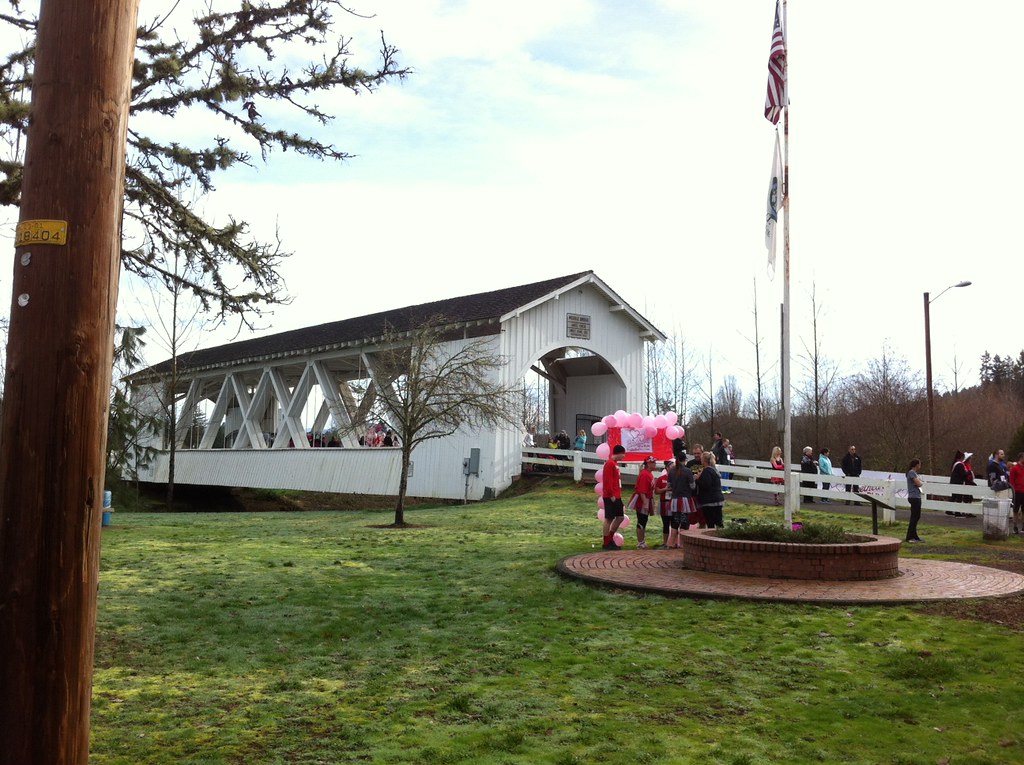 The 1 mile kids run took off promptly at 10am, and it was great watching the little runners have so much fun! As the 10:30 start approached, we first sang the National Anthem, then got some course directions from one of the organizers. Being a small town race, the instructions included phrases like “when you see my husband at the water station, you have to turn right” and “Joe is at that intersection to point you the right way.”

With a field of 110 runners in the 5k and 10k combined, there was never any congestion. Just half a mile into the course, the 5k runners turned right while 10k-ers went straight to get in their additional miles, and the field stretched out even more. Every turn was very well-marked, both with flour marks on the road and a volunteer pointing us in the right direction. Along the way there were also cones with signs assuring us that we were still on the right track. The mile markers matched exactly with my Garmin’s tracking.

Most of the 5k course was on sidewalks and streets through neighborhoods. The roads weren’t closed to traffic, but there was very little traffic at all, and signs and cones were good indicators for cars to be careful. The second mile of the 5k took us on a gravel trail along a tree line; huge lung lichen on the trees and on the grounds are an indicator of the extremely clean air we got to breathe.

The last mile was weaving through neighborhoods again; I reached the 3 mile marker with still several blocks to go to the finish. After a few more turns, I arrived at the finish and gladly received my finisher’s medal. Water was available at a vendor booth, and we also got a breakfast of biscuits and gravy, orange slices, and coffee. Each participant was able to get the printout of their race results at the Eclectic Edge van. About an hour after the start, the mayor of Sweet Home started with the awards ceremony. Top finishers received a crown, and the top three in age/gender groups were given an additional medal.

Overall, this was a very nicely organized small-town event. I have put on a race with around 100 participants myself, so I know the work that goes into it, and the City of Sweet Home organizers went well beyond what’s expected for a race of this size. I can definitely recommend the Sweetheart Run to anybody who’s looking for a race in the area.