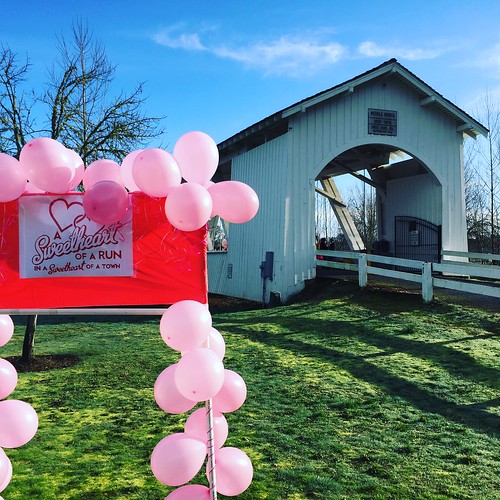 Run Oregon blogger/administrator Jessica and I have an interesting relationship. We message each other daily, and have blog-related conversations almost hourly it seems. We tease each other like a brother and sister, though we have only actually met in person one time. So when she says that there is a race that I HAVE TO CHECK OUT (that is probably a direct quote), I know better than to question her. The Sweetheart Run is the most recent of those events. This small-town race started up last year as a fundraiser to get kids in the Sweet Home area access to active programs when school is out. Jessica participated in this inaugural event and raved about how it was everything a local race should be. And I can vouch that she hit the nail on the head.

Being childless in the morning, and staring down a magical 1030am start time, I decided to hit the road early and make it there in plenty of time. The morning was absolutely beautiful, with the sun shining and a buzz around Sankey Park – the start and finish of the races. Eclectic Edge was set up with tunes blaring, announcements about the local businesses who contributed to raffle were being announced, and some pre-race food and vendors were all smiles under the Weddle Covered Bridge.

10k and 5k runners started together and began by taking to the city streets. Prior the race, the RD mentioned that there were suggestions following the 2015 event that there were too many turns. As a result, they cut the turns significantly down and there were some long straight stretches to truly get into the groove. Once runners hit Long Street (an aptly named road), there was a turn to the east. 5k runners took a 90-degree turn and us 10k runners continued a lollypop out-and-back before reconnecting with the 5k.

The course, while not featuring really many major inclines, did have some variance – both in hills and terrain – along the way. The first of which was around Mountain View Road and Long Road. There was a small little climb that slowed down my pace just a bit. Even though Long (or really any road for that matter) was still open to traffic, I never felt at risk. There were bike lanes pretty much the entire time, and well-spaced cones every little bit to caution drivers.

Speaking of cones and course markers, directions were extremely simple and easy. Arrows let us know we were always on the right track and a handful of volunteer guided runners in the right direction while directing traffic and the a few key intersections. I’m usually not near the front of a race, so I always have someone to follow. During this race, I was surprisingly near the front, which left me concerned I would get lost – but I needn’t have worried.

Following our return on Long Road (and a water station at the turnaround on 41st), we reconnected with the 5k course on 18th Avenue. I was in 2nd place, neck-in-neck with a much younger and more fit kid. I continued to shadow him as we climbed up to South Hills Trail, a beautiful rock and dirt trail that is shaded by canopied trees and feels like you have escaped to another world. We followed up one straight stretch on the trail system with another medium stretch. It was about this time (perhaps mile 5.5 or so) that my energy was zapped and my teenage “nemesis” began to pull away. The final stretch was mostly downtown back to Sankey Park.

I ended up with a 2nd overall finish – which I believe is my best finish ever. Both me and fellow blogger Geli (who ran the 5k) had measured long courses – the 10k at 6.47 miles on my tracker and the 5k at 3.42 miles. Neither of us really seemed to mind, though it is important to point out. Following the event, biscuits and gravy were available (say what?!), along with coffee, bagels, and oranges. The Sweet Home mayor announced overall and age-group winners and some Sweet Home princesses handed out the medals and crowns. It was a great local finish to a great local day.

I have to hand it to Jessica – she has great taste in races. I recommend this race (scheduled for February 11, 2017!) to anyone looking to check out a new 10k or 5k.