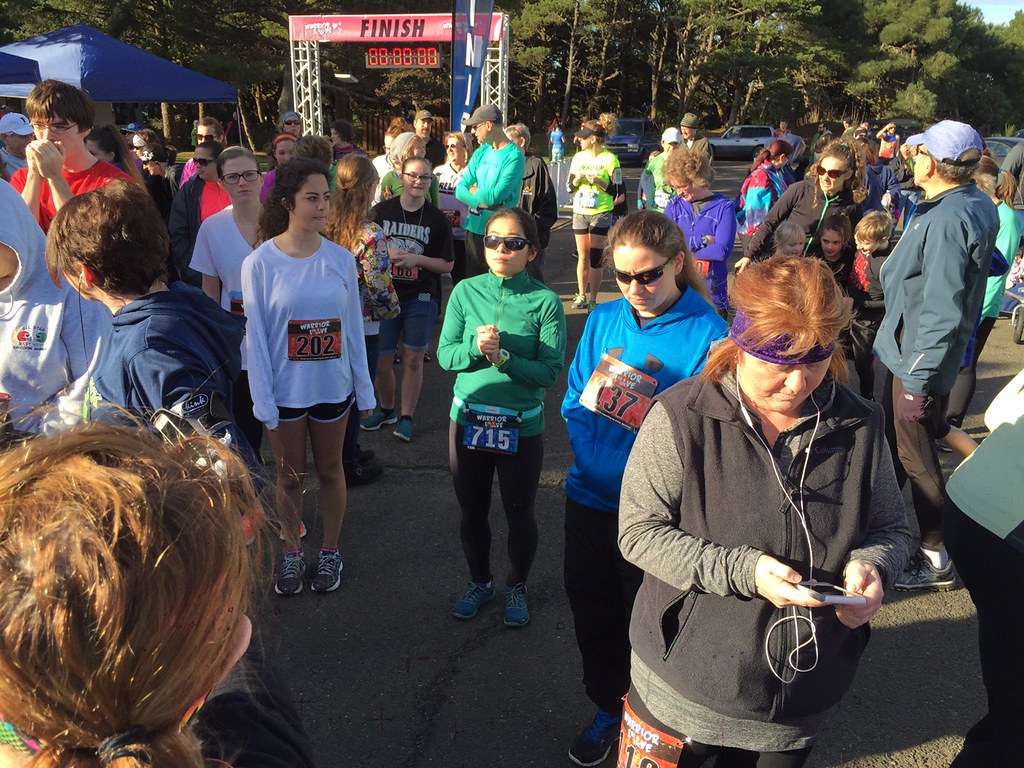 After doing a short race preview for the Warrior Love Run at Nehalem Bay State Park on February 7th, I thought it would be a fun little race. There are a lot of fun, small races out there, so it initially didn’t temp me much since that's not my typical distance and Manzanita is quite the drive for a 10K. I kept thinking about it, maybe because Matt was giving me a little push to go run it and figured I'd see if any girlfriends might be interested in tagging along. I'm a terrible decision maker so I decided that if I had a girlfriend who would run it, that would be a sign I should run it too and we could make a getaway adventure out of it. I got lucky with not one, but two girlfriends who agreed to head to the coast with me and I’m so glad we did.

Truthfully, I wasn’t expecting much with the run being organized by 4th and 5th grade girls from Tillamook and held in an area most Oregonians haven’t heard of,  but was pleasantly surprised. Registration was easy and I appreciate events that keep the cost down by offering to purchase the race shirt separately. The Warrior Love Run shirts were cute and still available for purchase race morning. I just think it’s better for the environment to give participants a choice since we all have our own style and some of us have more than a couple event shirts hanging in the closet.

The run started at 10AM, to give people time to get out there. Since we stayed in Manzanita, it was kind of nice to sleep in and have a relaxing morning with the girls. We got lucky with the weather; it was a beautiful, sunny day at the coast. My biggest concern with this run was getting lost. I chatted with a few people close to the start and they assured me the course would be easy to follow. Several of them had run it last year and apparently most of the participants were locals, or at the very least were familiar with each other.

A smaller race meant I needed to stay with someone to prevent getting lost. Close to 10AM they gave a race countdown and we were off. Running through Nehalem State Park, it was lined with trees, included views of Neahkanie Mountain and a gorgeous stretch along Nehalem Bay next to the Manzanita airport. I can honestly say I’ve never seen so many Volkswagen vans in one spot. As we ran through the campground, it looked like a VW van convention, they had picked a good weekend to camp. Small pink and purple cones lined the course and I had someone in my view the entire time. By the time we met back up with the 5k course, I had lots of people alongside. It was so fun to see all the young families and girls out participating, many of them skipping or galloping along the way and all sorts of adorable. It was nice to witness sheer joy, something you don’t see all the time.

The all flat course and gorgeous views were enough for me, but this small-town run continued to impress me at the finish line as well. They didn’t skimp on details you don’t really expect at a smaller event. The race was chip timed, had an actual archway with a time clock and had a perfect giveaway at the finish line. Instead of another medal to hang up on my wall, they gave out coffee mugs and cute ones at that. A photographer was also snapping finish line pictures that were shared for FREE. They also had your typical post-race snacks with some bagels, bananas and cheese strings. You could grab some food and go print out your results.

Since it was on Super Bowl Sunday, we were in a hurry to get back to Portland, so we didn’t stick around for the festivities, but I can honestly say this run exceeded my expectations. On our way back to the house, we stopped off at the Manzanita Coffee Shop and a guy asked me if there was a race going on that day, I guess my bib gave it away. When I told him about the Warrior Love Run, he commented that it was gutsy to hold an event at the beach in February and he’s absolutely right. While we lucked out with the weather, this run would be fun rain or shine. February is a good time for it, the month of love. The SHE Warriors gave me a new race to love and I’ll be careful the next time I judge a small-town race.