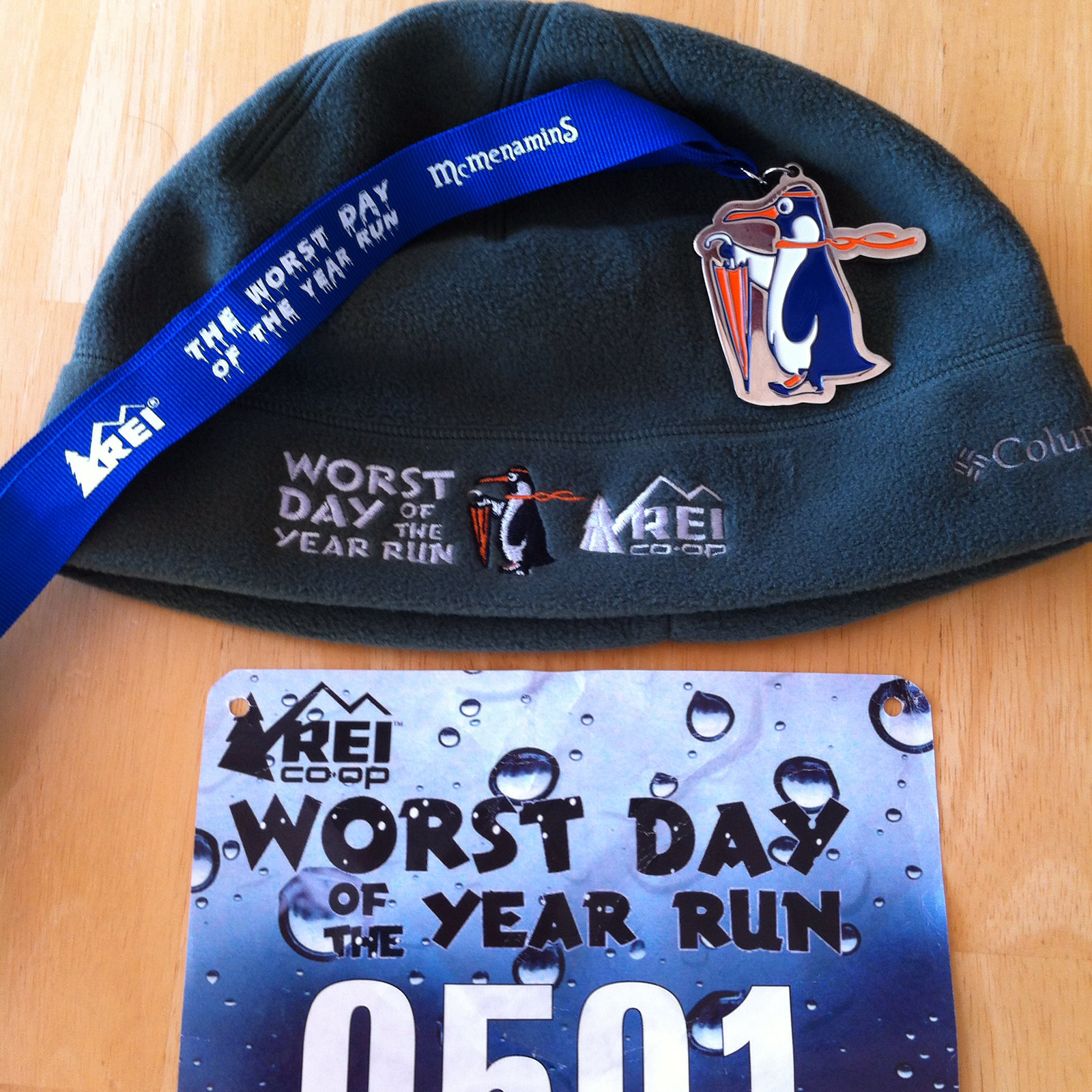 The Worst Day of the Year 5k run/walk took place at McMenamin's Edgefield Winery on Saturday, February 6th. The weather could have been much worse; temperatures in the 40s and overcast skies made it a perfect morning for a run. The field was limited to 1,500 participants starting in three waves, and chip timing was optional. Results for the run can be found here. As usual, my goal was to get to the race an hour before race start. Since I had a drive of 40-50 minutes from my home, I had chosen the 10am start time. I made good time on the road (no traffic on an early Saturday morning), and by the time I had parked the car, walked to the start/finish area, and picked up my race number and beanie hat in the large tent with heater, it was still before 9am. I asked race staff if I could still start with the 9am wave if it wasn't full yet, and they didn't see a problem with that.

View of the start/finish from the half-way of the loop.

The idea behind the wave start was to limit the field of runners to 500 at a time since the gravel trails are the width of a golf cart and can accommodate three runners side by side at the most. It turns out, even 500 people were a lot for these trails to handle. Until the first hill stretched out the field, there was a lot of dodging and weaving and stepping onto the muddy grass golf course next to the trail. It may have helped the first half mile if runners had been directed to line up by expected running pace, or at least ask walkers to start from the back.

The course was tougher than I expected, but very fun and beautiful! The trail around the McMenamins Edgefield golf course has a pea-gravel surface that is easy to run on. My new trail shoes (ed.note: shoe review posting on 2/15) ended up being the perfect choice for this race. The hills were much steeper than I expected, and I (like many others in my pace group) decided to hike up instead of staying at running pace. Since one loop around the golf course is exactly 1.55 miles long (2.5 km), two laps completed the 5k run. I was lapped by the top finisher in my wave just before I completed my first loop.

REI provided an area to sit

After crossing the finish line for the second time, I veered to the right towards the finishers party, where I received my finishers medal. At that point, beer tickets were handed to those who were wearing a costume. The vendor tents had samples of energy bars and fruit snacks, REI had set up a nice circle of folding chairs, and McMenamins was serving beer and coffee in the same heated tent that housed the registration and gear check tables. Right next to the tent in McMenamin’s Blackberry Hall, race finishers could choose between two different soups (lentil or barley&mushroom) with rolls to refuel and warm up after the race.

Overall, this was a very enjoyable event! The location is beautiful and the race very well organized. I will definitely consider coming back next year.