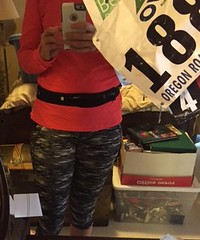 You can tell from my professional photograph how slim this belt is, even with my keys and phone tucked inside, preventing me from looking like a Kangaroo.

I have been on a quest to find a place to put my phone, lip balm, and keys when I run. I've tried cramming them into my CamelBak, my water belt and arm band. But after stuffing those items full with my essentials, I'm left with uncomfortable (not to mention unsightly) bulk. Arm bands tend to slip and slide with enough sweat, making them useless and annoying---who has ever had to stop on the side of the trail to re-strap damp Velcro to their bicep?! My water belt makes me sound like Santa's sleigh with my keys flopping up and down inside,  sometimes drawing smirks from other runners. The worst part?  It would ride up when I run and I was CONSTANTLY adjusting it back down over my hips. So much so, that I would often leave water at home just so I wouldn't be bothered by all of the shifting. Of course, this meant I had to plan my route around stops for water or cut my runs short. I'm ashamed to admit I would do those things, but I did them. When I was offered the opportunity to try out the SL3S Dual Pocket Water Resistant Running Belt, I was excited but a little hesitant that it wouldn't live up to its claims.

A close-up of the inside of the SLS3 Dual Pocket Running Belt in real life.

I was pretty skeptical when the belt arrived. It was smaller than it appeared in photos and was extremely slim-a whopping 1.5″ wide! The buckle was very light-weight and didn’t look like one you’d find on a fanny pack that Aunt Ethel would wear to play the slots in Vegas or tootling Disneyland. I slipped my phone in the pocket and it stretched to accommodate its girth, but didn’t look awkward nor was it hard to remove or put back in. The belt is attractive yet very minimalistic, which is what you want when running. I strapped in on and proceeded to do a few jumping jacks. The belt bounced around a bit, but that was because I didn’t have it tightened enough. When I did cinch it up, I bounced around like Richard Simmons and Chrissy Snow on Three’s Company. The elastic itself can accommodate waist sizes 24″-38″. (Not great if your hips fall above or below the “one-size-fits-all” size the company makes). It was time to test this bad-boy out with a nice 6 mile jog.

The first part of my route that day was downhill. This is usually where my water belt would start to creep up on me. However, with the added impact, it didn’t phase the belt. It remained in place. Even my phone (did I mention I have a bulk-adding  Otterbox on it?!) and keys didn’t bounce around which was very welcome. As the hill flattened out, it started to rain. Ah ha! This was the perfect test to see if the run belt would hold up to its promise. After two more miles, I decided to stop under a tree and unzip the pockets where my money was stored. Dry as a bone—not even damp from sweat! I opened the other pocket to check out my phone. No cloud of moisture on the screen could be detected. Amazing! I put everything back inside and continued my jog home, pretty happy that I could have all the little necessities and conveniences which make my runs easier and more enjoyable, without causing a major hassle.

Before I could totally give my seal of approval to the SLS3 Run Belt, I had to take it out for one more test: to dinner and some dancing with the hubby. As I finished getting ready for the evening, I put my lipstick, credit card, ID and phone in the belt and strapped it on under my leather jacket. Did he notice?! Nope! We got to the restaurant and when I took off my coat, I got a Hey…is that some kind of  a new belt?! Looks interesting… That was it! He had no idea that this “belt” was my new running accessory When we decided to meet friends for some salsa dancing later at the club with the band (OK, it was really their living room and Pandora), I shook and shimmied my fool self around and around, and the belt stayed in place! No riding up or slipping down…SOLD! I’m a new fan of this dual pocket running belt. Want one for yourself?! Scroll down the page.

I mean, I would rock a fanny pack if I was as cool as The Rock! Photo from Google Images

If you don’t end up winning, make sure you check out their Amazon Store. The belt retails for almost $30, but Amazon has it listed for $12.90 (57% Off).https://widget-prime.rafflecopter.com/launch.js