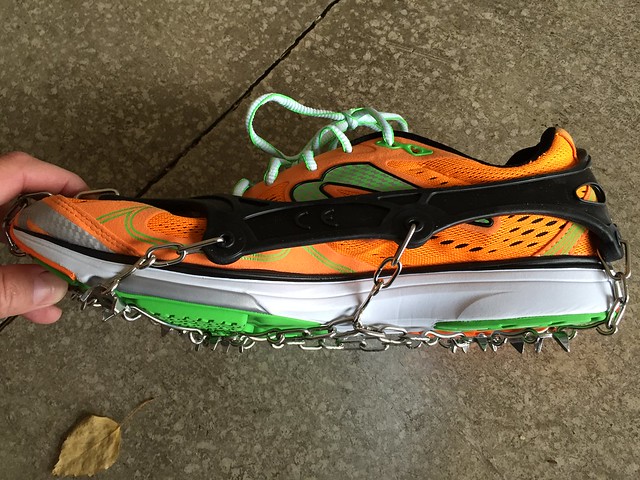 This was first posted in the November 2015 publicaion of ORRC Magazine. There is a saying up here in the Pacific Northwest that if you don't like the weather, just wait 15 minutes. I think this is especially true when trail running here in the fall and winter months.I know that I have been out in great areas like Silver Creek Falls or Alsea Falls and what started as a cool sunny run, suddenly turns into a downpour. And I have also been heading to a race near Shellburg Falls in rain, and ended up in the hills 40 minutes later in snow and frozen trails. The point is - it pays to be prepared. One way to be prepared is having the right gear. While it has been difficult to fully put to the test this summer and fall so far, I have been holding onto some Hillsound FreeSteps6 Crampons for just the right time to try them out. While I have managed to get a run in, the weather has not necessarily been cooperative for a true functional review. That being said, I wanted to talk about how amazingly simple and portable these things are.

As someone who shudders in terror at the mere thought of putting chains on my tires, I was prepared for the worst. If only car chains were as simple as the FreeSteps6. There are markings on the metal that show which ways are front and back, and pulling the rubber over your shoes is as difficult as things are. They were taught on my feet and stuck in place immediately without needing to worry about fiddling with any clamps or hooks. My honest to God first words were a confused and elated, “that’s it?!” In a race, you wouldn’t have to spend more than about 30 seconds pulling both on (or off) before hitting the trails again.

They are also supremely light and portable. The large size runs about 1.5 pounds total per pair – light and packable enough to carry in small running or other hydration packs. Shoot, you could also easily carry them in your hands if you wanted without worrying about it.

My short runs in these provided a solid grip in less than ideal terrain. To be honest, it probably wasn’t wet or muddy enough to warrant their use, but it was easy to see that the Free Steps had some great grip to them. As the rain seems to be coming with more intesity and frequency, I am eager to bring these to my next trail run and see how they go. These will also be a new must-have item in my hiking pack next year. I wish I would have had them when we trekked through the Wallowas.

Obviously, I will have more to say when the weather becomes more “Pacific Northwest”, but from my first impressions, I am impressed with the Hillshound FreeSteps6.