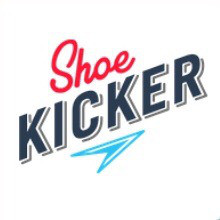 As much as we like to think of running as an "inexpensive" sport, it comes a surprise to nobody that we tend to SPEND a lot of money on running gear. Sometimes I look down at myself and I strip everything off of me that isn't necessary. It's pretty freeing. However, it's obvious to all that there is one piece of gear we just can't do without - running shoes. However, even though running shoes are a sound investment, that doesn't mean that we shouldn't have the opportunity to try to locate the most affordable option. I'm not saying we should all just hit the streets in $15 no-name shoes from K-Mart, but why are we just OK with plucking our favorite pairs off the first website we go to without first checking around and seeing if we can get it cheaper somewhere else. I mean, every dollar saved is one we can put towards a Gu packet or two right?! ShoeKicker is a site (currently in beta) that functions similarly to Kayak.com, the website that peruses the internet for the best flight, hotel, and travel deals. ShoeKicker was started, founded, and is led by Imran Khoja, who used to run at Williams College. He got the idea when he was on a run (a place where all good ideas seem to originate) and was ruminating on the fact that he couldn't find his shoe, in his size, at an even reasonable price at any store in Boston. ShoeKicker was born right then and there.

I have been perusing the site over the past week or so, keeping in mind that site is in Beta and are still working through kinks. They seem to understand their role in the running market. They are there to pair you with shoes, not provide you with a bunch of ancillary information, so the design is welcoming, simplistic and straightforward. You enter your shoe size, gender, and start typing in your shoe of choice.

I started by typing in the name of some popular shoe brands and styles. Once entered, it spits out the location of the lowest price, as well as how the rest of the competition “placed”. There is even a DNF section for those who didn’t happen to carry that particular shoe. Just click the “Get ’em” button to get directly to the location or create a price alert to be notified when shoes become available for less than the lowest price.

There are still a few things that need to be added or molded a bit:

Despite these things, this beta is ridiculously promising. I know I don’t have time to surf endless websites for shoe deals. I want to spend my spare time running, not spent behind a computer screen (unless blogging of course). I strongly recommend you bookmark this website and utilize it for your upcoming shoe purchases.