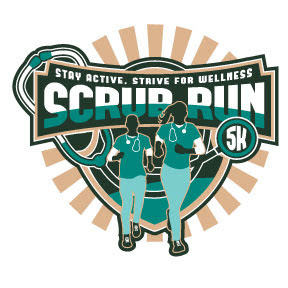 The Scrub Run is a new collaboration between race organizer Uberthons and the Medical Society of Metropolitan Portland to benefit Doernbecher Children's Hospital at OHSU. It's a combination race and dinner and music concert, with the food provided by Qdoba and the music by the winner of the Battle of the Doctor Bands. Expected to be run annually, the inaugural race took place on a bright, warm late afternoon on August 15 at St. Josef's Winery in Canby. I registered for the race with a comp entry courtesy of Uberthons and took a leisurely drive to Canby on Saturday afternoon. It hadn't been as hot as a week earlier, which was a bit of relief, but it still looked to hit the mid- to high 70s. I was about 15 minutes into my drive when I realized that I'd worn the wrong pair of running shoes. Oh no!

The “wrong” pair was old Brooks Glycerins that I had once used for long runs but now kept just for everyday wearing. At least they were running shoes; it would’ve been a disaster to have headed out in, say, Rockports…. That wasn’t the only goof, though. I also forgot to put on sunblock. That’s probably the result of doing a lot of indoor treadmill running during this ridiculously hot summer.

I aimed to arrive 20-30 minutes before the start of the race because I had been unable to make it to packet pickup (which was a big “d’oh!” given that it was again at Big Al’s in Beaverton, with goodie bags). As I neared St. Josef’s, I could see the familiar road cones and flip-boards that Uberthons uses to mark race routes. Farther down past the entry point, I could see the flashing lights of a police car. It didn’t seem to have anything to do with the race, but I hoped it wasn’t an ominous sign.

The traffic volunteeers directed me into a hairpin turn on to the winery’s lot, where I backed into a space. This is what it looked like from the vantage of the parking spot: 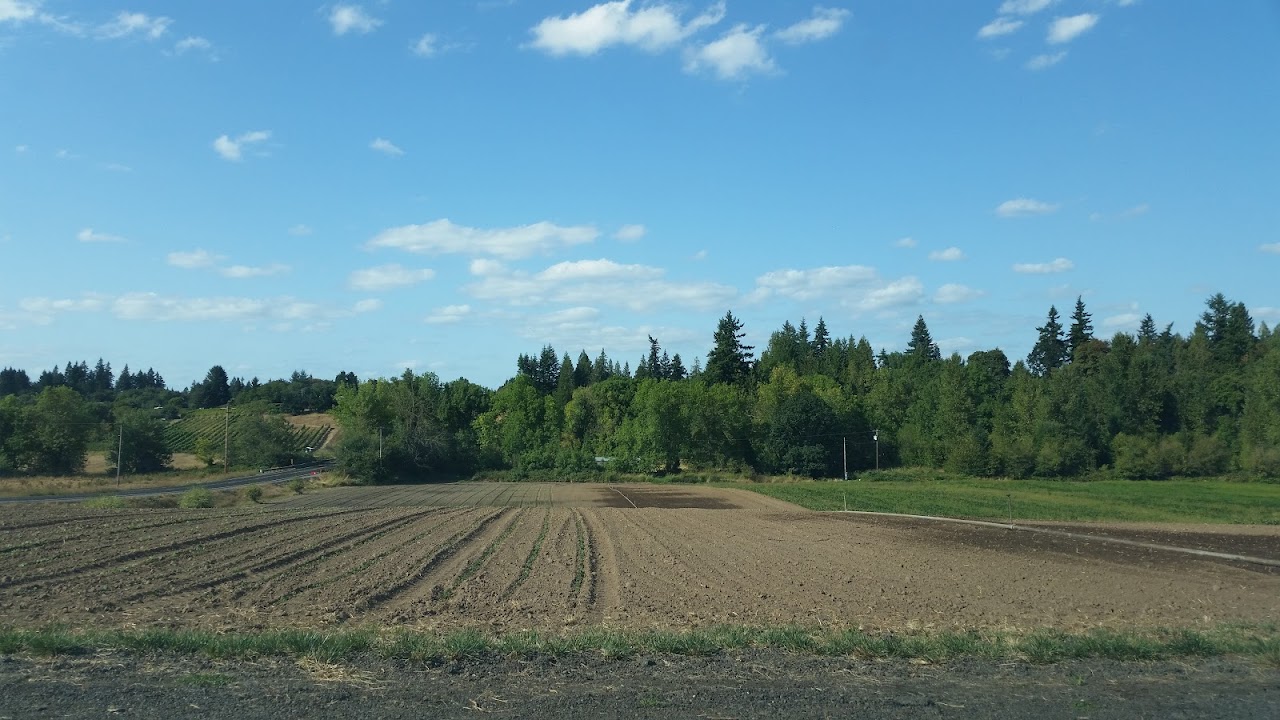 The view from the parking lot (photo by Tung Yin)

The lot was close to full already, and when I headed over to the registration table, I saw that there were already lots of runners milling around. It was a pretty spectacular day to be outside, especially in an environment far from the crowds. 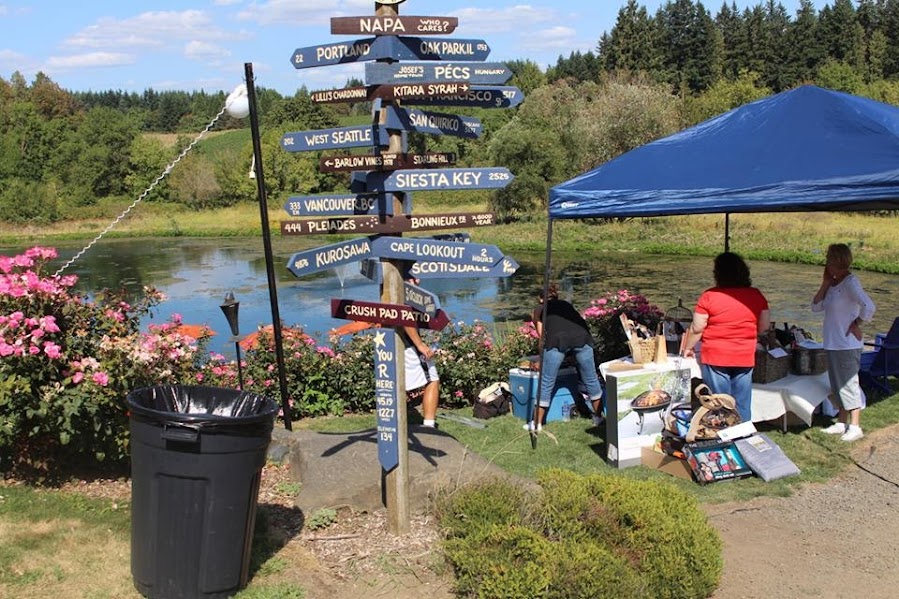 Which way are we running??? (photo courtesy of Uberthons)

When it hit 5 p.m. – the projected start time – we were still getting instructions about the course (one lane would be blocked from traffic, so we were to stay in that lane), and greetings from the MSMP representative. I learned later that there had been a car crash on the road just past the winery (fortunately, no serious injuries), which tied up some of the traffic volunteers and led to some last-minute scrambling on the part of Uberthons to get the race course set up properly. The delay didn’t matter, and most of us were waiting in the pleasant shade.

Many races have a bicyclist ride in front to lead the runners, but one of the sponsors of the Scrub Run was Kuni Lexus of Portland, and so there was a lead car. 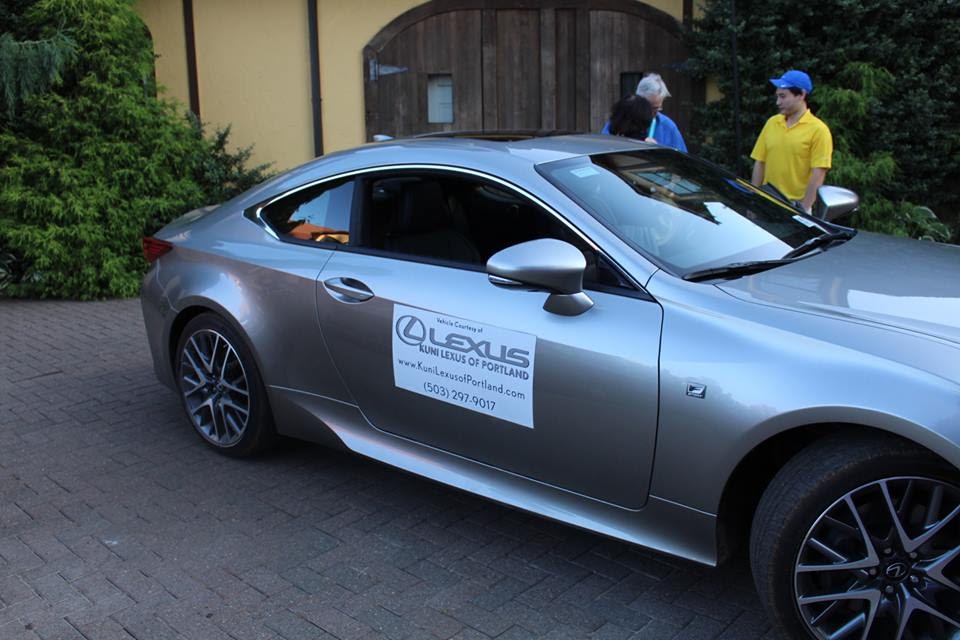 As is typical for Uberthons races, we started in waves of about 20 or so. I positioned myself near the front of the second wave and watched the first wave head out. Not long after, it was our turn.

I have a bad habit of starting races too fast. I keep telling myself, “negative splits,” but it never seems to work. At least for the 5K, too fast of a start doesn’t have to be crippling, since it’s a relatively short total distance.

Except in this case, “too fast” worked out to being under a 5:20 pace for the first 1/4 mile. Are you kidding? A 5:20 pace is just a bit slower than what Brian Bernier runs 5Ks in! To be sure, part of that 1/4 mile included a short downhill stretch, but still, that was ridiculous for me.

That’s also where I caught and passed the front runners so that only the Lexus was in front of me. “Hmm, this is a strange feeling,” I thought to myself. I’ve only actually finished first overall in one race, so I definitely wasn’t used to being in front.

Naturally, that 5:20 pace was totally unsustainable. Between that and the blazing sun (which made the ambient temperature of 75 degrees feel about 10 degrees warmer), I was starting to pay a stiff price. Meanwhile, the Lexus was toying with me, slowing until I got within maybe 100 feet, and then driving off. I think I have an idea of how a greyhound feels chasing the rabbit around the track….

The Scrub Run route looked basically like a typeset capital-L that had fallen down, with the start/finish at the little hook at the end of the short segment, which corresponded to Barlow Road. The longer straight segment in turn was Zimmerman Road.

Ten and a half minutes into the run, I reached the turnaround point. The Lexus had gotten there earlier of course and executed a three-point turn to start back. I had the sense that there were some runners catching up to me, but I kept in mind Brian’s advice: “Never look back.” Besides, once I hit the turnaround, I wouldn’t be looking back….

The water station was right there, and while I’ve never stopped for water in a 5K, it was soooooo tempting on this day.

Shortly after that, I got passed by one, and then another, and then another runner. Two of those were Emily Dimick and Curtis Stradley, the eventual winners. The third was Jesse Wagner. When he caught up to me, I thought for a moment that he was going to match my pace. But he gave me an encouraging, “You’re doing great” and then pulled away from me.

Just past the two mile mark, he slowed to a walking pace. This turned out to be my slowest stretch of the race as well, but I caught and passed him. I thought I should say something in reciprocity, but nothing came to mind, and anyway, it was hot and I was trying to run on the edge, so I just kept going.

Not long after, I heard footsteps behind me, and Jesse passed me again. Huh. First there was the Lexus, letting me get close before speeding off. Now there was a human runner doing the same…. This repeated itself around the 2.6 mile mark before he passed me for good.

As I’m sure readers know, a 5K race translates to 3.11 miles. Usually when I hit the 3 mile mark, it’s time to kick into overdrive. I didn’t have much left and if anything, had a negative kick. That little hook that I described as the beginning and end of the course? It was only 0.04 miles, but it felt like it was three times as long.

I do recall that Alan Rasmussen, who was announcing everyone’s finish, remarked aloud that I had remember to stop my GPS watch after crossing the line. Yep, I’ve had enough occasions of blocking the antenna’s reading of my bib (fortunately at the start of the race, not the end) because of where my arms were from fiddling with my watch that I’m careful about that now.

Due to family obligations, I wasn’t able to stick around for the Qdoba dinner or the music concert, but the dinner sure did look delicious: 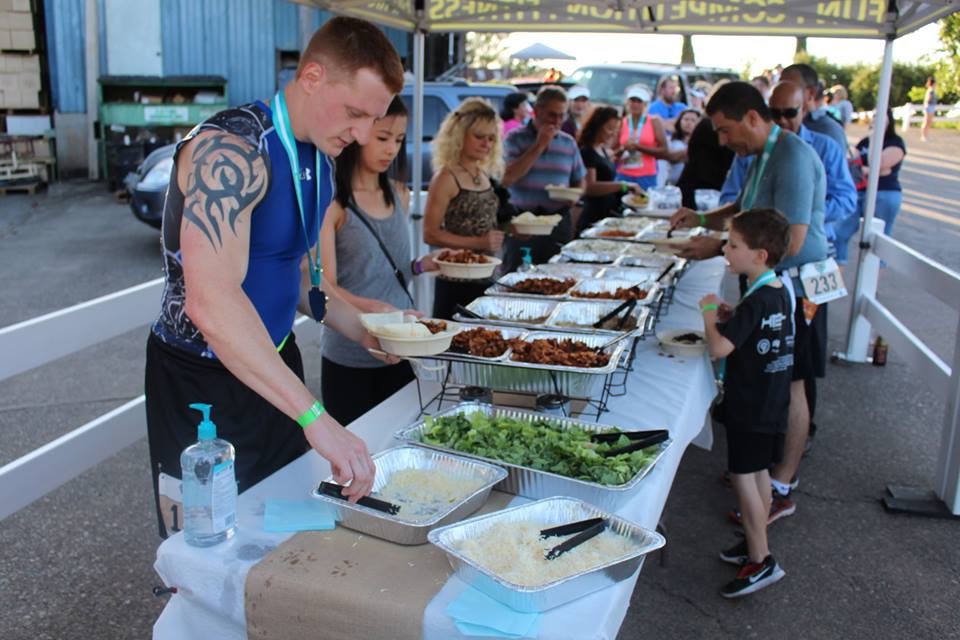 Overall: St. Josef’s Winery is a nice venue for a race. There were 141 participants, which seemed like a good number for the location given parking, available space for pre- and post-run mingling, and so on. The course was straightforward and straight – very similar in layout to the Freedomthon (though with some more altitude variation). It wasn’t dangerously hot, but it was hot enough to impact performance a bit. (In case you are curious, one website claims that 75 degree weather should cause a 9-10% increase in race pace, although that sounds a bit high to me. Another website has a nifty calculator – the only downside is the time you plug in is what it adjusts based on temperature, so if you are trying to figure out what you might have run in optimal temperatures, you have to guess until the figure for 75 degrees matches your actual race time.)

Pictures: I’ve posted a number of pictures that Uberthons took. There are a whole bunch of pictures available at the Uberthons Facebook page (click here).

+ denotes a runner under 18 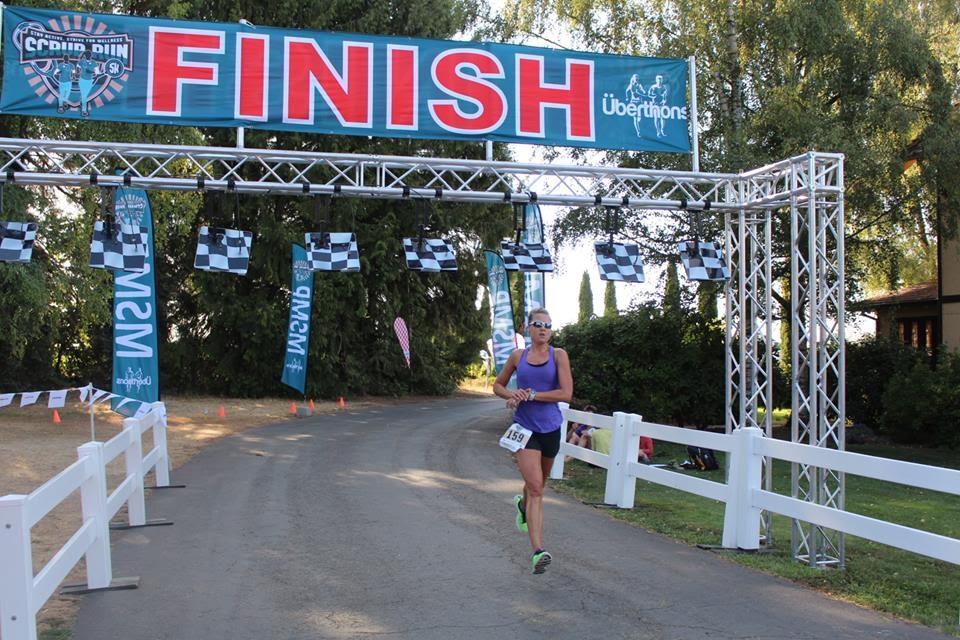 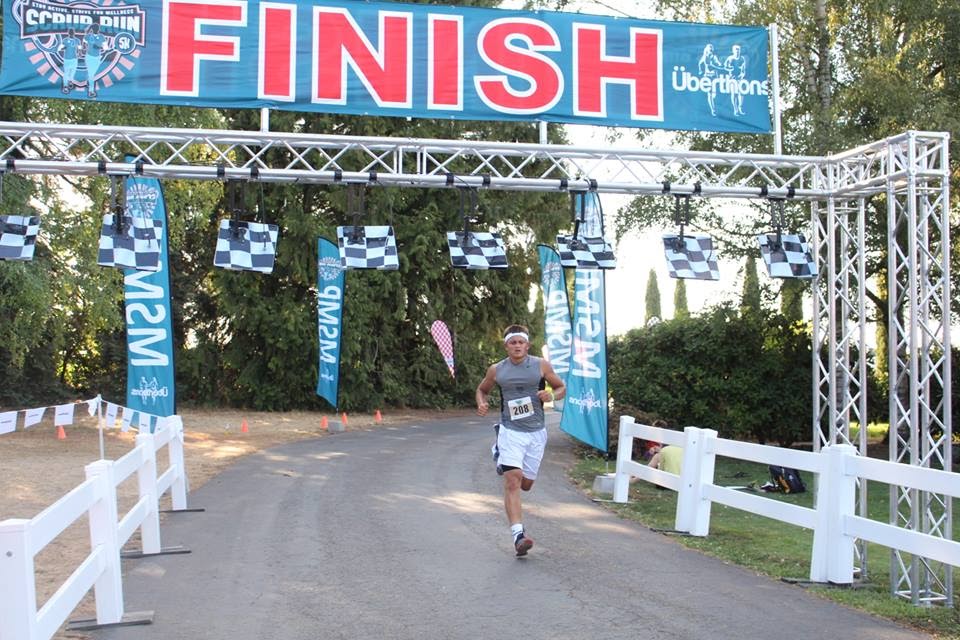