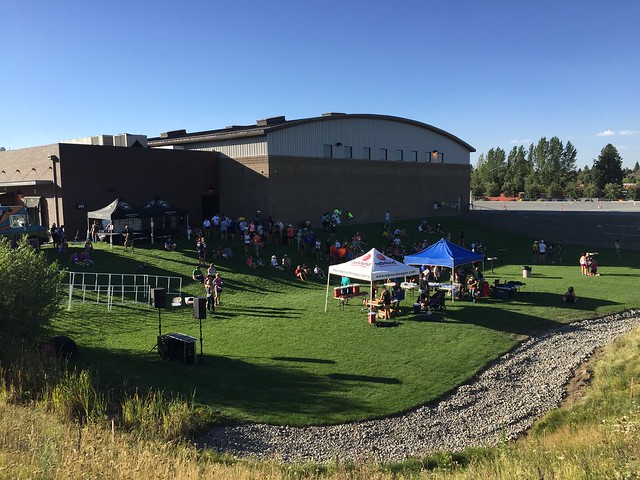 What can I say – I like to race when I travel. So when I found out the dates of our family camping trip in Madras, I started perusing our race calendar for the Bend area races going on. I was ecstatic when 2015 Deschutes Brewery Twilight 5k lined up perfectly with my trek over the Cascades.

The event was held on the brand new lawn at the brand new Deschutes Brewery being finished up. For those of you who have been to Old Mill area in Bend (and those who enjoy beer as much as I do), know that the large Deschutes Brewery sits just over the river from the mall and is right up the street from the Les Schwab Amphitheater. With Deschutes Brewery expanding like crazy, a new giant warehouse is being built to keep up with the demand – and that meant good things for us runners.

The grassy area was shaded perfectly by the building itself, providing a welcome pre- and post-race reprieve from the Central Oregon heat. Speakers were playing music as runners started piling in to get registered. Deschutes Brewery was setting up their Twilight Summer Ale (the race namesake) for post-race drinking and Barrio Food Cart was getting things ready on their end as well. The atmosphere and location were electric.

While I knew that Bend is an outdoor enthusiasts heaven, I really didn’t anticipate the number of people who registered. Despite it being the opening night of Bend Brewfest at the amphitheater (leaving parking a bit of a challenge), runners kept piling in as the race start neared. I am not sure what the anticipated registrants were, but it felt a bit cramped as all of us started making our way to the start – right on the Shevlin Hixon Drive. The street itself was crammed with almost 500 runners standing shoulder-to-shoulder readying for the start.

The race directors stated that this year presented a new course and I remembered from looking at the course map that I have run this route in some fashion a bunch before in my work travels. However, with nearly a half a thousand people hitting narrow trails and sidewalks, it made maneuvering challenging and frustrating in sections. I was pushing my kids in the double stroller, so we started in the back. However, I can generally run at a decent clip despite the extra 80 pounds of weight and it wasn’t long before the paths made it nearly impossible to pass or maneuver around anyone. Even though I desired to pick up the pace, I still felt bad for people trying to pass me as I felt like I was hogging the paths, when I was just trying to keep any regular pace I could find. A few other stroller runners eventually took matters into our own hands by maneuvering over to the street on SW Colorado in an effort to get a little breathing room. While things thinned out a bit as people fell into their paces, it was still tight for at least the first half of the race.

That’s not to say that the race course wasn’t great. I truly LOVE running these areas when I am in town, and doing it in a racing event was equally as great. From the start near the amphitheater, to the gentle uphill on SW Colorado and down Reed Market Road, to magical Farewell Bend park and the Old Mill District, it touched on some great Bend landmarks. It was made even better with lots of shade accompanying the warm summer evening (is there a better thing than a warm Bend evening? I think not).

The post-race was equally as well put together. Even though there were plenty of people at the event, the line for our free Deschutes Twilight Ale was essentially non-existent when I got there, and there was still plenty of room to relax on the lush grass. Aside from the cramped feel at times, there wasn’t a lot to complain about. A staggered start may help ease some congestion in future installments of the race, or even a course with some initial road closures that allowed for runners to thin out up front would be helpful. However, I still had a great time and kicked off my vacation weekend the best way I know how – by racing!