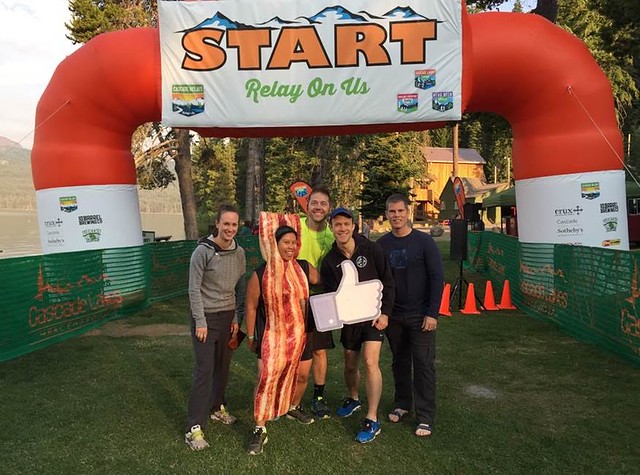 Why Bacon? I have to say this wonderful costume has been my tried and true standard.  It’s lightweight, breathable and everyone LOVES BACON!  I was given the dubious honor to run the well-known leg 29 which is also known as the costume leg.  There were amazing costumes out there that I have to bow down to.  The man in the very hot panda costume is either a costume running God or insane or both as well as the lady as one of a 6 pack of beers.

I was definitely concerned for this relay since I have done several Hood to Coast relays but was warned that Cascade Lakes Relay is further in mileage, harder because of the heat and elevation.  I figured if I was going to be out there in the scorching sun, bacon would do.  One of the many helpful meat wagons (aka ambulances) would be nearby if needed.

Leg 29: Although the description seems easy with its short 2.09 miles, what it really was 100 degrees of sweltering heat around 2PM in the afternoon with elevation at 4948’.

Thank goodness for my Van 1 for checking on me at Mile 1 which I had already gulped an entire bottle of water and was doused with our sprayer and given another water bottle for my last mile.  People along the highway who had no idea that the Cascade Lakes Relay was going on were surprised to see a strip of bacon running alongside the highway.  I was met with many cheers, honks, and smiles with my run.  I had my own soundtrack that consisted of uplifting music such as “Eye of the Tiger”, “Final Countdown”, and Alicia Keys’ “Girl on Fire” that was amplified via the speaker vest that my van-mate Brian loaned to me.

When I made it to the end there were many at the transfer who couldn’t believe I ran in my bacon costume.  I was met with high fives and many a Go Girl…or Go Bacon!

I am glad I survived and didn’t need any medical attention.  To see how I did, check bacon out at 2:02 minutes at our YouTube “2015 Cascade Lakes Relay Movie”.