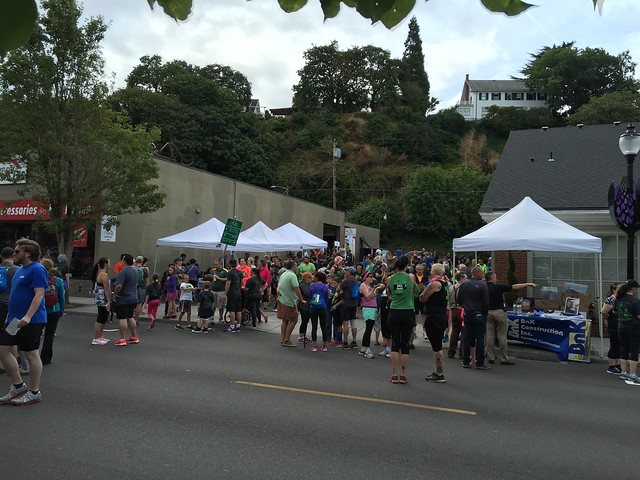 As a child of the 90's, I remember the Oregon Trail game fondly. It was probably my first "real" video game I ever played and obsessed over. There was just something about a strategic game that allowed for a little "action" (hunting)! And who didn't create a family full of people like "Fart" and "Poop"? Hopefully not just me. So when Downtown Oregon City announced the Oregon Trail Game 5k, I was super-pumped! And so were a bunch of Oregonians as well, as the race garnered almost 600 runners to Oregon's first city for a day of running, strategy, and a great time at the First City Celebration.

The event was a hybrid of speed and planning. When we picked up our bib, the above information was on the back, giving instructions on how to play the game portion. The course itself was definitely a challenge. If you know anything about Oregon City, you know that there is a sheer cliff near the historic downtown area, and then roads, steps, and an elevator to the top – where the rest of the city lays. Within the first quarter-mile or so, we reached the elevator. Runners continued up the 270+ steps to the top, while stroller runners like myself got the luxury of taking the elevator. Myself and another dad watched as the doors to the elevator remained closed and we were getting passed by a bunch of people. Our fears were all for naught, as when the doors finally opened and we stepped aboard, the upward trip was rapid and spit us out near the very fastest runners. Score!

We then continued to run up, along the McLaughlin Promenade which overlooked Willamette Falls. At the end of the promenade, we were faced with our first Decision Point*. We continued up through quiet city streets and even higher still to Waterboard Park for our second Decision Point. Overall, I was already tired from the amount of uphill while pushing a stroller, that I had to stop and take a drink from the aid station – something I don’t typically do in a 5k. It’s definitely not one of those “fast and flat” courses.

All of those uphills were followed with some welcome downhills, including a few steep ones. A third Decision Point was reached in the historic McLaughlin neighborhood and we continued our straight and declines all the way to the end.  The final stretch down Washington and 12th Streets felt like I was holding on to the stroller for dear life! Crossing 1500 miles on wagon had nothing on the fear I felt running here (kidding)!

*I am not going to mention what they were (aside from the picture I posted below), as it’s more fun to not know what to expect. Sign up next year to see all the decisions!

While the race seemed very well-organized for an inaugural event, there was one snafu along the way. I know there was a solid amount of runners (myself included) who were not directed appropriately to Decision Point 4. I remembered thinking after hitting point 3, that we must be getting to 4 soon because the race was nearing the end. It sounded like a volunteer had not guided some people correctly unfortunately. This put my finishing distance right around 3 miles even. While a mini-bummer, they had the ability to manually enter your decision via computer afterwards, thus not completely rendering the game score useless. While that was great, it still took away a little from making a decision in the moment.

I know that there was some lamenting of the amount of sidewalk running, but that didn’t really bother me any. The traffic was slow enough that there were long stretches where street running posed no threat. I had no problems, though I’m wondering how the slower paces with a greater amount of runners navigated this. The race smartly did a wave start, so hopefully that thinned things out enough. There was also a little miscommunication on the use of the stage and awards were delayed for longer than anticipated.

These are all easy fixes for next year. And let’s not forget that the race was set-up by the race director’s daughter as her SENIOR PROJECT. How cool is that?! Not too bad for an inaugural race put on by a high school “race director”. Kudos to her!

After the race, runners were able to enter the First City Celebration free of charge. All 21+ finishers received a free brew from Oregon City Brewing Company. There were a variety of other breweries (including some really solid local ones – Feckin’ Irish Brewing, Coin Toss, Portland Cider Company, as well as some others like Rusty Truck Brewing out of Lincoln City) to try and food / art booths to check out. Live music was blaring out from Liberty Plaza and there was a solid local vibe in the air that kept smiles on people’s face – even despite the light misty rain. This race was definitely unique and one to try out for runners of all skill levels. Scores are still being tallied as of this writing, so I hope I haven’t hypothetically died of dysentery or drowned in the North Platte River.

3 Comments on No Dysentery! A Run Oregon review of the inaugural 2015 Oregon Trail Game 5k