I’ve done a variety of obstacle course races over the past few years and always enjoy them. So when my sisters decided they were going to try their first at the Boise Spartan Sprint, I knew I had to head to Idaho to join them. I had never participated in a Spartan Race before and I was eager to see if it lived up to all the hype. 6 of us decided to embark on the fun and we formed the team Sisters and Some Misters. The venue, Thomas Pence Ranch (about an hour outside of Boise), was dry, dusty, and without shade. I was amazed by the amount of tents and crowds of people getting ready to experience a Spartan Race. One of the emails we had received before race day said the course was “mostly flat.” When we looked up at the hillside and saw the tiny dots that were people making their way to the tops of the hills, we knew this was far from flat! We also noticed right away, that no one was running up the hills. This was going to be a doozy! 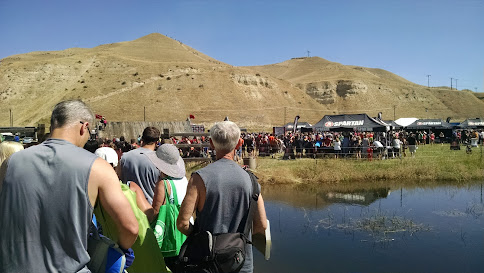 The hills of Spartan Sprint Boise 2015

The check-in lines were long – unless your last name starts with a V!  My check-in line had 3 people in it.  My sisters and their misters were in line for a good 20 minutes or more.  Good thing we arrived super early. Despite the crowds, the staff was efficient and knowledgeable. When my bracelet for my timing chip broke, I was directed to the correct tent to get a new one. It was a bit of a hike to find the tent, but I was happy to have been sent in the right direction.

After the long wait in the hot sun, I was losing my “game face” and was worried about how I was going to fare on this race. But, as soon as we hopped the wall to get into the starting corral for our 12:15 p.m. start time, the music was blasting, the energy was high, and I was able to get my head back in the game. I was nervous, but excited to head out on the course. After a few rounds of yelling, “I am a Spartan” and “AROO!” we were sent out on our adventure.

Our run was quickly halted by 3 mud pits that were surprisingly deep. At least we started out cool! We made our way to a wall and then a cargo net climb and all too soon we were making our way up the first of 5 (Yes, 5!) hill climbs. As soon as the climbing began, the running ended. This was a steep hike, not a run. The hillside was loose, sandy dirt that gave way at times and often filled the air with blinding dust. When we finally made our way to the top, we had another obstacle and then we headed back down the steep, slippery hillside. Some people went for the controlled fall and cruised down the hills. I opted for a slower side-step until the footing was more sure. At the bottom of the hill there were a few more obstacles and then we climbed again. At the top of the 3rd hill, I experienced my first obstacle failure. The spear toss was a one-try only obstacle, so the penalty of 30 burpees was dutifully taken on by many of us before we headed back down again. 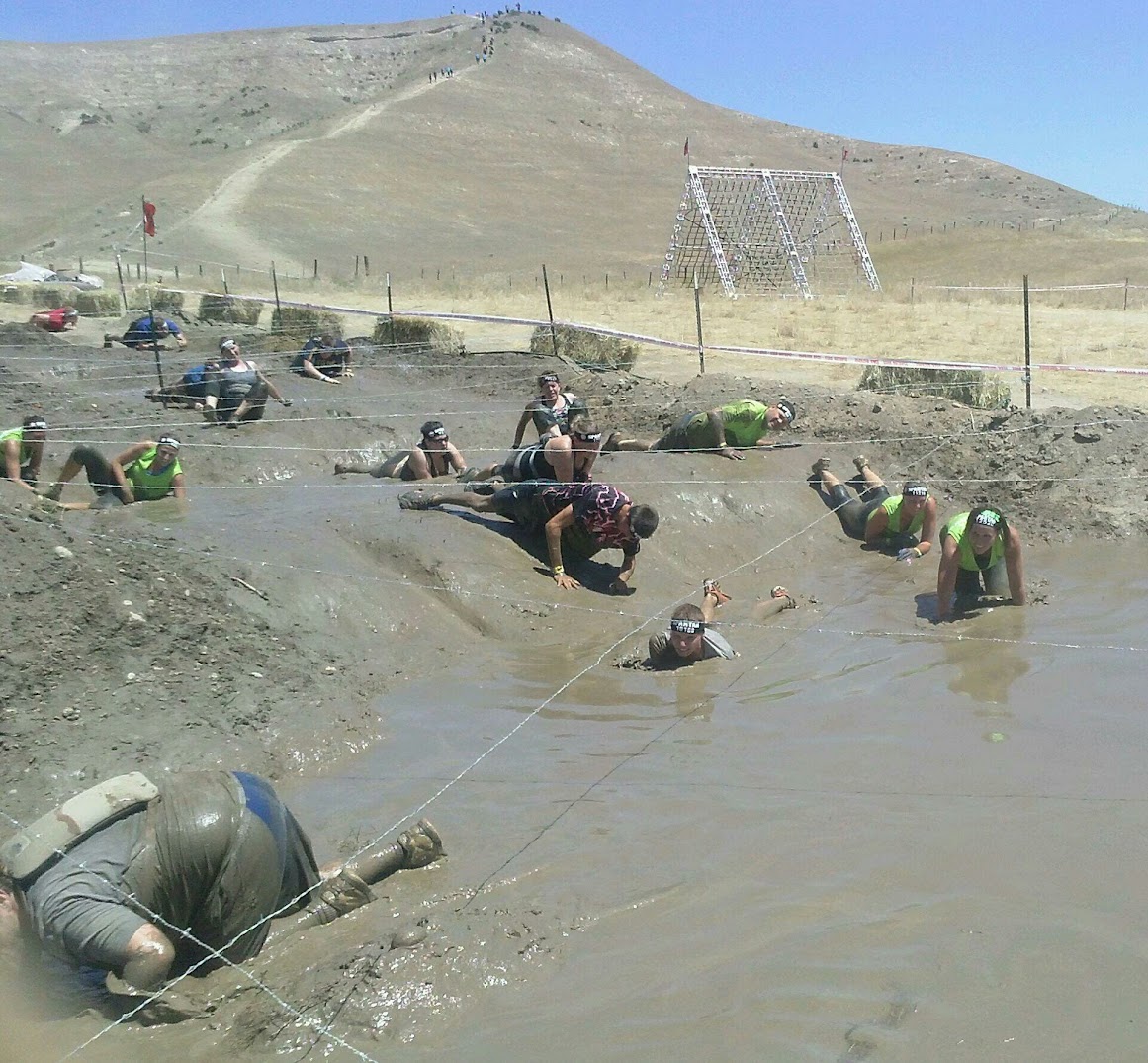 The barbed wire crawl with a cargo net and hillside climb in the background. Photo by Paul M.

At this point we were crunching on the sand that filled our mouths as the cooling breeze was also stirring up the dry, dusty hillside. The 4 water stops along the way were more about rinsing out the sand than truly hydrating. The 85 degree day meant that even the water was warm. I tried not to think about how badly I wanted a cool drink of water and how some Chapstick would be really nice, too.

At the bottom of this hill we were “treated” to back to back carrying obstacles. First, the Atlas Lift – which was a heavy cement ball that we had to pick up and carry a few feet then put down and pick back up and carry about 5 times – mixed with 5 burpees.  This was followed by the Bucket Brigade. Here we had to fill a bucket with gravel and carry it up and down a hill. This one gassed me! I had to stop 2 times to rest on the way up the hill. I kept hearing people drop their bucket and hearing gravel spilling out. I was determined not to let that happen. After those 2 obstacles, my forearms were burning! That seemed to make hill climb #4 even harder. After another cargo net climb at the top of the hill, we made our way to the Memory Test. Based on our bib number, we had a word and a 7 digit number to memorize. I am the worst with remembering things when I’m working out hard, so I was worried about this one. I took my time reading and re-reading the number. I even found a stick on the ground and tried to etch the number into the mud caked on my legs. The trek down this hill was dead silent. Everyone was so intent on remembering their word/number combination that no one spoke all the way down. It was almost eerily silent after the constant chatter, encouragement, joking around, and whining that was always surrounding us on the rest of the course.  Soon we were on to more obstacles. This time they were upper body, vertical pulling challenges all in a row. This translated to 2 more sets of burpees for me. These were near the finish area, but we weren’t finished yet. There was one final hill climb left. 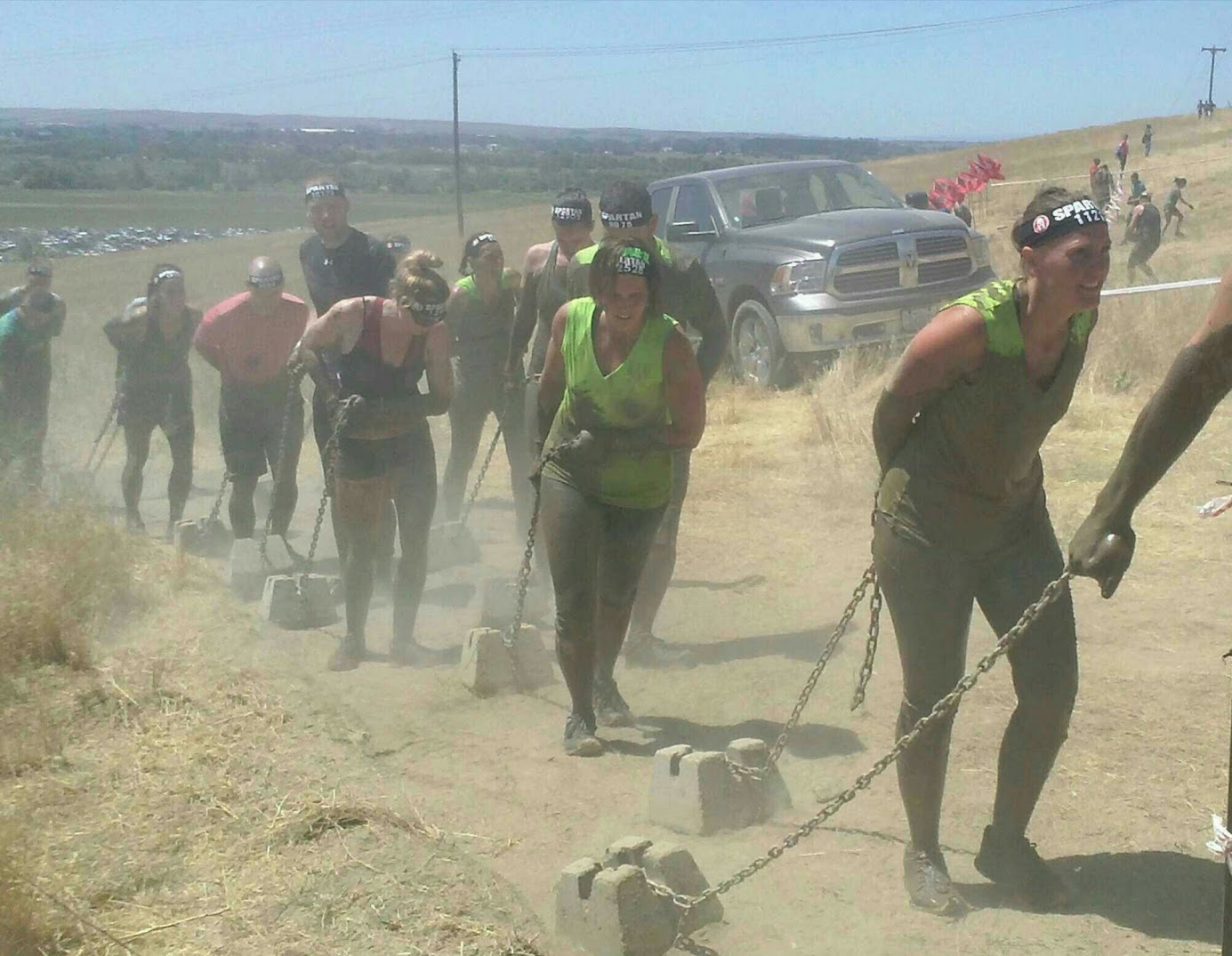 Making our way up the dusty incline at the block drag obstacle at Boise Spartan Sprint 2015. Photo by Paul M.

The last hill was the steepest, or so it seemed. It was like climbing through an accident scene. While, no one was injured, people were in various states of fatigue stopped all along the route up the hill. I just focused on breathing and taking one step at a time. There was another obstacle to complete and then we were headed down the single track trail towards the finish. A couple more obstacles at the bottom of the hill, which turned into one final set of not-so-pretty burpees for me and we were finally done. What a crazy adventure! 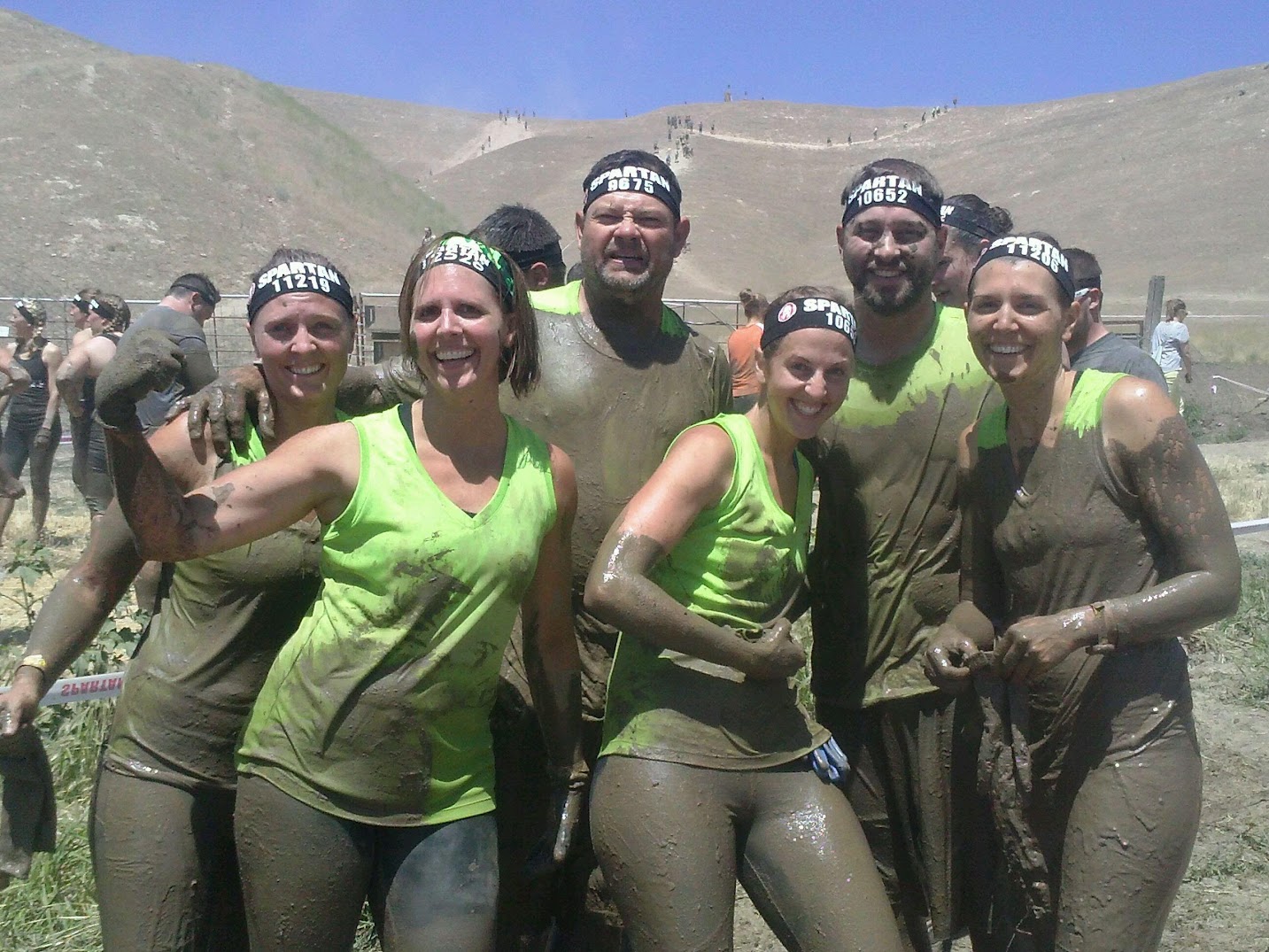 Team Sisters and Some Misters after the barbed wire crawl. Photo by Paul M.

As we waited in line for our team photos we realized we had not had our memory test. It would have been impossible to miss a station, so was this some kind of Spartan mind trick? The funny thing was, despite everything, we all remembered our word/number combinations. I can still remember mine today – 3 days after the race!

Spartan Race was challenging, yet do-able. Sure, there were some obstacles that some of us couldn’t do alone, but that’s the beauty of these races. They create teamwork – even among strangers. There were often times when I helped someone I didn’t know or offered a word of encouragement that seemed needed. That help and encouragement was often given in return. While having a team with you is ideal for the camaraderie, most obstacle course racers are willing to stop and help a fellow racer out when needed. There is something about an OCR (obstacle course race) that creates a “we’re all in this together” mentality. It’s that atmosphere and the challenges these events offer that keep me coming back.

After our photo, we made our way to the “showers” to hose off the first layer of dirt and grime. I was impressed by the number of hoses available to spray off and that there was a decent amount of water pressure. Everyone was in good spirits and recounting the good and not-so-good moments of our very first Spartan race. It wasn’t long before plans for the next one were in the works. Watch out world! You have a whole new group of Spartans out there! AROO!