Run Oregon receives and tests running shoes from time to time. This initial post about the Salming Distance. Matt and Annette have just received their pairs and have outlined some background information about the company and the new Distance model. Company: Salming Shoe: Salming Distance

Salming is a relative newcomer to the running shoe world. The company itself is a Swedish sports brand that was created in 2001 by native son, Swedish hockey player Börje Salming. The brand which was solidly in the handball and squash world has now ventured out into running shoes for the masses and are now available in the US.

For those who are interested in the technology of the shoe, here are some of the descriptions of the design: 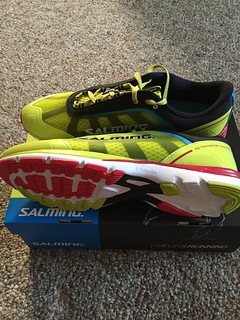 I have mentioned before that I am not a runner who typically cares about style or color in my running wardrobe – shoes included. Heck, I wear above-the-knee basketball shorts when I run! The color of the Salming Distance is “Acid Green”, though I would describe it as a neon yellow if I didn’t know.

Upon picking them up, I noticed how light they were. The 8.4 oz shoe felt noticeably lighter than my previous shoes (11.4 oz) I have been wearing and loving. The upper layer’s mesh outer really frees up some of the weight, while the shoes still looks as if it will hold up over time with the three layers (see above).

I know there is a lot of technology that goes into this shoe, but the one thing that stood out initially was the seemingly simplistic design. There was nothing to funky or gimmicky about it from a visual standpoint. It just looked like it was a shoe ready to hit the roads.

While I love fun colored shoes, I often go from wild to boring based on what color is available in the style and size of running shoe I’m purchasing. Cool colors are a definite bonus, but it is all about comfort for me. When my Salming Distance Running Shoes arrived, I was happily surprised with the Purple Cactus Flower. The colors truly popped out of the box. The first words out of my mouth were, “Wow!” When I lifted them out of the box, I realized they were much lighter than they looked.

The outer mesh material and heel/toe protective covering is different from any shoe I’ve worn before and looks like it would resist water for longer than the typical running shoe. But, I guess that will be discovered when I take them out for a rainy day run.

Just looking at the shoe can be education about the shoe in itself. Every part of the shoe has something written on it that explains its purpose.The inside of the shoe says “anti-bacterial” and “anti-odour.” Now that’s a concept I can get behind!  We all know there is nothing worse than the “stank” of a well-worn running shoe. The sole of the shoe has a variety of colors and materials each marked with an explanation like:  “Light Weight Rubber, ” “Light Weight Injection Cushioning,” “Torsion Efficiency Unit,” etc. With my new shoes just teeming with information, I was eager to give them a try.

These shoes are designed to be for racking up the mileage and keeping your feet comfortable on long distances. Considering that my previous pair of shoes is at the 500 mile distance, this is definitely the shoes I need right now.

I wore these a few times around the house before putting any miles in them. The fit is nice and feels like it has some extra room up front. That doesn’t mean that it feels loose however – just that there is wiggle-room in the toe area to be had if you need it. The cushioning feels nice, but doesn’t appear to be too springy. It just FEELS like a running shoe.

My first real run in these shoes were at the 2015 Volcano Half Marathon. I know it probably isn’t the best idea to wear brand new shoes on a 13.1 mile course, but I just felt confident in doing so. They held up to the initial test run and I never even remember thinking that I actually had new shoes on. They just felt great right off the bat. And afterwards, my feet, which had started becoming pretty sore after racing, felt MUCH better than they have in a while.

All things considered, I am excited to have these in my arsenal and see how things go over time. 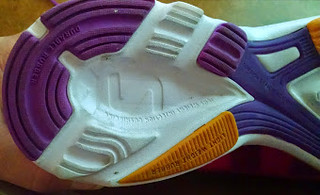 I’m always quite nervous about new running shoes, so I like to wear them to work for a few days to get a feel for them before my first run. Since I’m a personal trainer, wearing brightly colored running shoes to work is 100% acceptable. However, I will admit I had to wait until I had the right colors on so that my Purple Cactus Flower shoes would look right with my outfit.  (Don’t worry – I don’t have to always match my shoes to my outfit when running. Just when I’m at work!)

When putting the shoes on, they initially felt a bit stiff. But, once I got them on, they were quite comfortable. I could feel that there was a reasonable amount of cushioning even though the sole felt less pliable than the running shoes I have been wearing. The inside of the shoe was fairly flat and did not feel like it had an arch. I was worried about missing that feature, but it didn’t seem to be an issue.  I was on my feet all day and the shoes were quite comfortable. I did have to do a bit of fancy lacing to keep my heel from slipping since I have a narrow heel, but the lacing hack did the trick. My feet felt well-supported by the  sturdy construction of the shoe, without the bulk or heaviness in the sole that many running shoes have.

The main adjustment for me was the stiffer sole that didn’t bend with my every directional movement like I’m used to during work and my workouts.  But, since running is a one-directional movement, I’m sure I won’t notice it as much on the run. I have yet to take them out for their first run, but I look forward to debuting my colorful Salming shoes soon. I better start picking out my matching running outfit now!