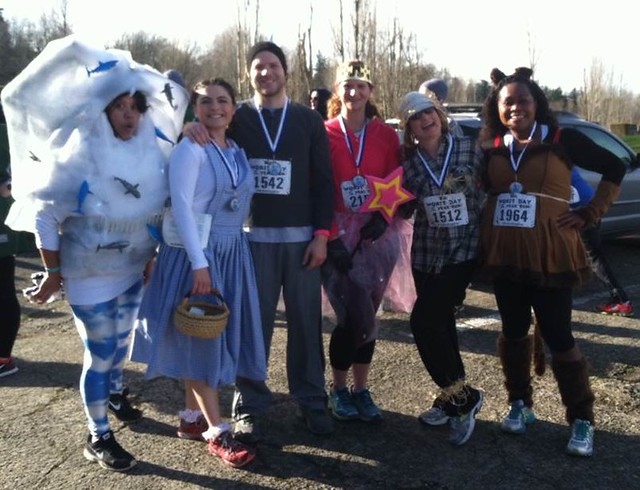 Run Oregon guest blogger Mel Ortiz is our resident "Costumed Runner". She writes a monthly post about her adventures in running. Feel free to Submit a Guest Post in the “Contact Us” tab if you want to get involved. Pre-Race Preparations I had mentioned this run to my Saturday morning run crew early in January and at first there were no interest.  I know we have run in rain, snow, and sometimes a hailstorm but the thought of doing it in costume maybe a little daunting.  I decided to ask my friend and co-worker if she wanted to run this 5K with me since I would run in costume in any sort of weather and the idea of running it as a tornado…wait as Sharknado got me excited. This is the third annual Worst Day of the Year run and the site shared that it encourages costume and specifically weather related costumes.  I thought it would be clever to have me as Sharknado chasing Dorothy from the Wizard of Oz.  Sharknado for those of you who have not had the pleasure is a cheesy B or rather C rated movie that has gained some cult status recently with it’s ridiculous premise but a very good guilty pleasure to watch.

Skip forward to a week before the race and I mention again to my running group what both my friend and I plan to dress up as and then there was interest.  We decided that we need the whole Wizard of Oz crew there with our interpretation of the race versions since we were still running a 5K.

I decided to make my costume out of batting and lots of it.  It needed to look like a tornado but be light enough and breathable so I can still run.  I couldn’t find a number of plastic sharks so went to Amazon.com to find a bag of sharks for just under $6.00.  They came a week before the event so I spent a night hot gluing the sharks onto the batting.  For the shape, I hot glued the batting to a flexible mesh laundry basket.  It was the perfect shape that fit over my frame and kept the batting in place.  Without it, the costume would just fall apart after a few paces of running.

I then included a miniature white picket fence and miniature version of the house and the little Wicked Witch of the East feet sticking out of it just like the movie.  I finished the costume up with adding some small LED lights to simulate lightning and a touch of gray spray paint here and there to make it more tornado instead of a friendly cloud.

Now for the test run at home.  It was light, it was breathable but the only challenge is the visibility.  I decided to poke my head out of a hole I cut out in the front that first was just for my eyes to peer through.  This would alleviate any heat and visibility problems when running with my head out in the open.

Crossing fingers and toes for the race.

The Day of the Race

I am so thankful the race was on Saturday, 1/31/15.  Had it been a week later on Saturday, 2/7/15 and we would have run in the worst day of the year.  Instead it was sunny and dry with some chill in the air….perfect for running in costume.

We saw some great costumes represented. There were the ghosts from Pacman, my friends dressed up as Doug and the boy from the movie Up, several tutus a plenty, and superheroes galore.

Those who knew of Sharknado squealed in delight when they would spot my costume.

Cowardly Lion, Glenda the Good Witch, Scarecrow, Tin Man, and of course Dorothy from The Wizard of Oz represented.

I had to get this epic photo my friend and I reenacting the tornado (aka Sharnado) coming after Dorothy.  Even the Duck Girl was mesmerized with this reenactment.

Just as we were getting our group shot, a journalist/photographer from the Oregonian asked to take our photos and our names and what city we were from.  Well you guessed it,  the whole crew was featured in not only the Oregon Live website but we made it to the Metro section of the 2/1/15 Sunday Oregonian much to our delight .

We finally ran the 5K course and found out quickly that it had some hills and pretty decent trail run.  Yours truly had to make sure I picked up my feet to not trip on any of the gravel and mountain side of this course.  Had it been more like what the race name was, it would have been muddier so keep this in mind if next year the race is more rainy than sunny like it was this year.

For a great race with sponsorship from REI and Foot Traffic, good food and adult beverages at the end from McMenamins, proceeds going to a good cause with the Portland Police Bureau’s Sunshine Division, and reason to wear some fun costumes, this is the race for you.  Hope to see you there in 2016 and who knows what race related costume we will be next hear.