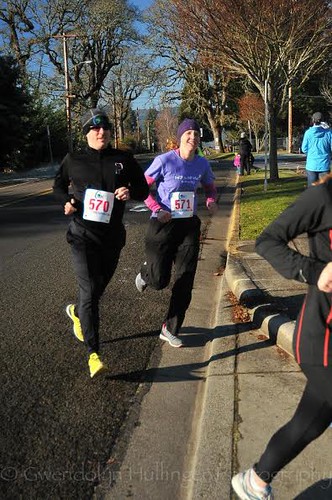 This recap was submitted by Run Oregon reader Blake Timm. Feel free to Submit a Guest Post in the “Contact Us” tab if you want to get involved. For so many reasons, I look forward to the Oregon Road Runners Club’s Y2K Run every year.  For starters, I have to love any race that starts a mile from my house and doesn’t require me to get up before dawn to run. Add to that the fact that the 10K, which I have run each of the last three years and four of the last five, is on a course along the southwest corner of Forest Grove is one I run on a regular basis (albeit the opposite direction).  It has a reputation as a well-organized race and, as the first in the ORRC’s annual 10K Series, is well attended with over 600 entrants in both the 10K and the run’s longer distance (this year a full-distanced half marathon). With both my wife, Melissa, and I entered in the 10K Series this year, the Y2K Run was again a no-brainer.  While she drove down to Tom McCall Upper Elementary for the race, I ran the mile as a warm-up.  The temperature was cool, around 45 degrees, and the skies were overcast, but no precipitation fell, which made for a pleasant morning to run.

With the new half marathon distance, adjustments were made to the start that had it curving around the school’s bus loop.  The change made for a narrow starting line, but that was not a problem as the race was chip timed.

While still coming off the Holiday Half less than a month ago, I wanted to come out and get a strong run in to start the year before I settle in to marathon training.  Like the Holiday Half, my goal was to try to be able to run at a consistent pace (6:45 per mile) and maintain that for six miles.  That would be a challenge considering the three hills on the second half of the course, including the long climb up Ritchey Rd., past Forest View Cemetery right at mile six.

The narrow starting line had me funneled back more in the crowd than I would have liked, but I managed to break free from the pack before making the turn onto Pacific Ave., into town.  I settled into a steady pace as we entered the Old Town neighborhood, but quickly figured out that I was faster than I would have liked.  I cruised through the first mile in 6:27, but figured I would see how well I could hold that pace.

As it worked out, not too well.  Despite running on flat surfaces, I went through the second mile at 6:39.  I settled in behind a woman with a Portland Running Company Race Team singlet for much of the third mile and came through at a 6:44 mile.  Well…at least I was back on the pace I was planning for.  Had their been a 5-kilometer mark, I would have come through in just under 20 minutes.

Not long after the third mile marker was the first hill on Stringtown Rd.  I went ahead and put a surge in so I could allow for some slowing on the hill.  I made it through the fourth in 6:47, charged again up the small second hill and made it through the fifth mile in 6:45 and 33:23 cumulative time.  I ran for the next third of a mile with a fellow racer who lamented that the last two miles had pulled him off his pace as well.  When the pace felt too slow, I went ahead and surged on, trying to hammer some of the flat on Ritchey before heading up the hill.

While I did a training run on the course the Tuesday before the race, nothing prepares you for that kind of climb in a race after six miles of giving it your all.  The hill was a challenge, but the good news is that once you reach the top it is only a quarter mile to the finish line.  I crossed the line in 41:38, slower than the year before, but still feeling like I put in a solid effort.

Then there was Melissa.  She had only been running again for two weeks after injuring her toe the night before Thanksgiving.  She was determined, especially with committing for the 10K Series, to make it out for the Y2K Run.  Not only did she make it out, but she cruised.  She finished in 59:49, running a 9:39 per mile pace and finishing in under an hour.  A great effort.  I am proud of her.

As we prepared to take off and get our girls to a birthday party, I talked for a few minutes with some of my colleagues from Oregon Distance Runner magazine.  Melissa came up to me and surprised me with the fact that I had placed 12th and won my age group!  I believed her, but I had to see it for myself.  Sure enough, I had won my age group for the first time in forever and convinced Melissa that I needed to stay behind and collect my age group award.  And it allowed me to enjoy a couple of the tasty post-race pancakes.

The Good: This race is always well-managed, and race director Barb Schimmel put on another great event.  There were plenty of volunteers to monitor the course, direct traffic at major intersections and man water stations.  The partnerships developed with the Forest Grove High School cross country team and Liberty Fit helped provide those volunteer bases.  The course is challenging, but not too challenging for a first race of the year.  Being the race’s 30th year, the race shirt commemorated the various incarnations of the event (the longer distance used to change to match the year.  Since 2000, it had been a 20K, 20.01K, 20.02K, etc.).  The post-race pancake breakfast is a long-standing tradition and there is always enough for anyone.

The Bad: There was one spot where course management could have been better.  On mile three, runners cross over from the Hwy. 47 bike path onto Stringtown Rd.  At that point, runners took it upon themselves to move to the right side of the road (running with traffic) and went a half-mile before moving back to the left side of the road (opposing traffic).  As it is an open course, it would be safer to have course monitors made sure runners stay on the side of the road opposing traffic.  As mentioned earlier, the starting line was a little too narrow for a race with 600-plus runners.