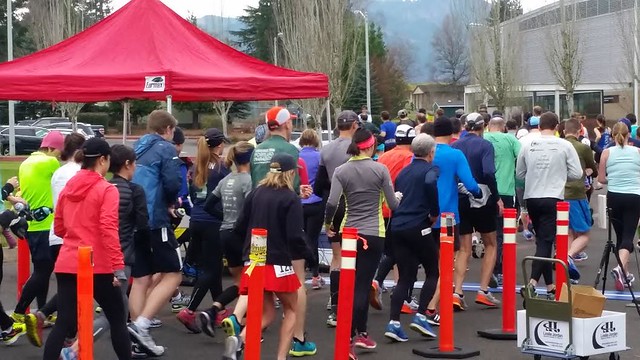 Dry weather, ideal running temperatures, AND a new race course...on January 10? Now that's quite the combination! The 2015 ORRC Y2k Half Marathon and 10k was blessed with all this greatness, and added a well-supported race and great post-race spread to kick 2015 off right. The race started and ended at Tom McCall Upper Elementary School, a very open and accommodating spot. We had the run of the cafeteria, hallways, and gymnasium to do all the warm stretching and pre-race chatting that was needed. This was one day, however, that it actually wouldn't have really been needed, and the weather was so mild. Indoor bathrooms were nice, but I didn't notice some long lines as more and more people started piling in. Luckily, there were a few port-a-potties outside which seemed to alleviate some of the lines - at least initially. But pre-race stuff is all just icing on the cake. Let's get to the meat of things - the race - and specifically my distance, the new half marathon. Runners of both distances (this was also the kickoff of the 2015 ORRC 10k series) toed the line at the wonderful hour of 930am, to the sound of motivational tunes and a camera-affixed drone buzzing overhead. Fellow blogger Teresa and I were able to chat a little before hand, where she informed me of her mantra for the day ("Don't start stupid. Don't finish wimpy") and I informed her of mine ("I'm feeling slow today"). Ok, so my mantra is crap - but it was the truth. After 2 races, this year has been shaping up to be the most humbling one on record for me!

After a quick curve around the parking lot, we hit the streets and jetted eastward on some quiet side streets. At about a mile and a half, my “mantra” seemed like it was going to be proved wrong as I was running at about a 7:15 min/mi clip and feeling solid. Teresa passed me around mile 1.75 – so we were both ahead of our games. Mile two spit us onto the sidewalk on Highway 47, looping us back around westerly. The pace was quick, probably quicker than it should have been, but the terrain was flat and the energy was high!

The lone “complaint” I had of the race (actually – it’s more of a suggestion and a simple fix) is the 10k and half marathon split. 10k runners were supposed to continue straight while half marathoners took the turn to the left to add some distance. There were a few people at the split, though they appeared to be spectators and not volunteers. I know there were a lot of questions as to which distance was supposed to go which way. Having glanced at the course map, I remembered needing to take a detour and figured this was it. It sounded like at least one person went the wrong way for a bit and still others faced the same dilemma. But beyond that, the course was great, well-marked, and the volunteers were fantastic along the way.

And boy were they needed considering the half marathon course.

At mile 4, we were greeted with a large looming hill. It wasn’t super-steep, but continued for about a full mile. The pinnacle was more than welcome before we started the decline. But after 5200 feet of running uphill, I was finally able to take in some of the beauty of the surrounding area we were running in. Now, I have been to Forest Grove numerous times and know that it sits essentially on the edge of civilization before it gives way to forestry on the way to the coast via Highway 8. But even with this knowledge, I still was taken in by the serenity of the rural surroundings in the hills around the city. There were farms, confused looking cows, yapping puppies motivating runners, and at least one burn-off happening – which brought even more of a rural feel to the day.

After the decline, we met back up with the 10k following mile 7. The reconvening meant one significant thing – another hill. I specifically verbally muttering an “ugh” as I noticed it up ahead. My heavy feet and tired lungs trudged up the vertical climb and I looked with sadness as the 10k runners got to head back towards town while we finished up a 4 mile out and back along Springtown Road. The rolling hills flanked some more beautiful farmland, but by this point, I was just struggling to put one foot in front of the other. Being that this was my first half marathon since the EWEB Run to Stay Warm in Eugene in late November, combined with the fact that I essentially took December off from running, I still haven’t gotten back into peak form.

Blogger Joe looking infinitely less tired than me after the race.

Just before mile 10, I ran into Teresa who was heading the opposite direction. While I had left her around mile 4, I was confident she was going to catch me. I grabbed a couple of cups of water and told her to come catch me as I was “beat”. Somehow I found enough energy to tackle the rolling hills again and head in the final homestretch. I knew the final hill was a solid incline, but that it was short. It took everything I had left to avoid walking it up there. I may have been just shuffling along, but I managed to chug up the hill and was as happy to finish as I have been in a while.

Post-race, the warmth of the school was very welcome and the pancakes were even more necessary for me. I chowed down a few (including some bananas and oranges) and basked in what I had just done. It may have been a humbling race, but it was an accomplishment and re-confirmed that I need to keep on trucking along in 2015. This 30th annual event pushed me to the max and is definitely one to get to if you are looking for a January half marathon in the country with great support. I know it is what I was looking for – and it delivered.