Tung Yin got started with Run Oregon when MaryAlicia Verdecchi invited him after seeing his recap of one of the 2012 Zombie Apocalypse Run. (He survived but was mauled by fellow Run Oregon blogger Brian Bernier that year.) 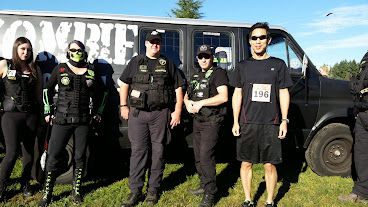 Me (Tung Yin), just before the Zombie Mud Run at Lee Farms in October 2014. (photo taken by my son)

Q: How old were you when you started running?

A: 43, hence, the title “obsessed fortysomething runner.” Technically, I started running when I was a teenager. I was on my college’s cross-country team for half a semester* but didn’t like it at all back then and quit.

* Yeah, I was a collegiate athlete. But it was Division III, and a very bad Division III school at that. Basically, anyone who wanted to play a sport made the team. I even played for two years on the tennis team. Again, just to emphasize, this does not mean that I was a good tennis player.

There are advantages to being a late-starter when it comes to running. I don’t have many ridiculous PRs fueled by youth that I’ll never match again. I did somehow once run a 5:27 mile when I was 16; not sure if I can ever match that again, at least not without age-grading.

Me, at the start of the 2015 NewYearthon. I’m blurred like the Flash! (photo by John Bee)

Q: What are your favorite running shoes?

A: For long runs, I like the Brooks Glycerin 11. I’m down to the last hundred miles or so on my current pair, and the 11s are pretty hard to find in my size now. I’ll give the 12s a try but I may be looking for something new. For all other runs, especially races, I like the Saucony Kinvara 4s. I built up a serious stockpile of these when they were discounted to make room for the Kinvara 5s.

Q: What is your favorite time of year to run?

A: Fall is my favorite season for just about everything. My kids go back to school (they’re not necessarily thrilled about that, but I am!), the weather is mostly perfect for running, it’s got the best holiday (Thanksgiving), and there are a bunch of great races going on: Oregon Half Marathon, zombie races, Halloweenathon, and turkey trots. Before I became a runner, I didn’t like 50 degrees and overcast skies. Now I think that’s perfect.

Q: How many days/week or miles/week do you run?

Q: What are your favorite running tech gadgets?

A: Apart from the usual suspects (smartphone, GPS watch), I love Columbia Sportswear Omni-Freeze Zero tech shirts.* These are the shirts that cool you down when you sweat. (Does it really work? Well, yes, but it’s a subtle effect.) I think it’s the tech nerd in me that appreciates the engineering science behind it. It’s also just a great tech shirt on its own, soft and stretchy and very effective at wicking.

* The Columbia Sportswear outlet store is a very dangerous place for me….

Q: What do you carry with you on the run?

A: I’m something of a minimalist: smartphone, GPS watch, and Road ID. Yeah, the smartphone and GPS watch are somewhat redundant. The watch is slightly more accurate, while the smartphone carries music and audiobooks. My wife just gave me the audiobook for Haruki Murakami’s IQ84, which will take 47 hours to listen to. That’s a lot of long runs right there. . . . That’s about it. I’m able to go for long runs up to 12-13 miles without water most of the time, and if it’s hot outside, I tend to run shorter or indoors; and similarly, I don’t seem to need energy gels.

A: 10K, definitely. I’m “faster” at the 5K, not just pace, obviously, but in terms of what racing calculators predict for my finishing times. That is, if I plug in a 10K race time, the calculators predict a slower 5K finish than what I’ve been able to do, and conversely, a faster half marathon time than what I’ve managed. But the 5K is pretty short. When you consider travel time (back and forth), pre-race parking and warm-up, and post-race cool down, it can be two to three times as long dealing with the race as the race itself. The 10K is short enough that you’re still running fast the whole way, but it’s long enough that you feel like the time spent on the race is in reasonable proportion to the time spent getting there and back.

A: This may sound strange, seeing as how I’m a fortysomething guy, but apparently I run best to Taylor Swift music.

Q: Do you do speed work?

A: I love indoor rowing on a Concept2 ergometer. It’s a nice total body workout, and because it’s non-impact, it makes for a nice recovery day when I want to get in some cardio work.

I don’t like it much but I also do some light dumbbell work (presses, rows, deadlifts, and squats) a couple of times a week. For a while, I was doing pull-ups as part of the weightlifting routine, but I stopped several months ago. I’ve started doing them again and am chagrined about what I’ve lost there in functional upper body strength. I mean, it’s not like I’m going to try out for American Ninja Warrior, but still…. My fitness goals have always been running ones, but this year, I’m adding to the list “do 20 pull ups in one session.” (I’m at 9 right now.)

I also don’t like cycling that much, but I’ve got my bike set up on a trainer in my garage. The only advantage it offers me compared to the rowing machine, though, is the ability to read while exercising.

A: I don’t mind the treadmill. It’s a softer surface, it’s great if it’s too cold/hot/rainy outside. The secret is to watch addictive TV. I highly recommend “24” – when Jack Bauer is fighting terrorists, it makes the miles fly by.

A: I don’t train for any specific race, so I haven’t been using any formal training plan with weekly blocks of routines that step up to the ultimate event. I do try to get in, on a weekly basis, one long slow run (10-12 miles), one threshold run (5-8 miles, with a middle section of 3-6 miles at 10K pace or better), and one interval/repetition workout (8-12 x 1/2 mile at 5K or better pace, with 1/4 mile jog recovery). The other days of running are easy running.

Q: What’s a memorable running experience of yours?

A: A few years ago, I ran the Child Abuse Prevention 5K race (timed by Uberthons). One of the other race participants was Washington County Sheriff Pat Garrett.

Well, if running is fighting, I beat the law. (Except that one of the Sheriff’s deputies beat me.)

Q: What you do when you aren’t running or blogging?

* Yeah, I watch a lot of TV when I’m running on the treadmill too. Basically, apart from family, my favorite things are running and TV. Hence, my personal blog is titled TV and Treadmills.

Q: What’s something Run Oregon readers don’t know about you?

A: Um, my bank ATM pin code…? (At least, I hope that’s the case!) Okay, seriously, let’s see, having grown up in Southern California, it’s probably not surprising that I’ve met a bunch of celebrities, ranging from Eddie Murphy (circa Beverly Hills Cop 2) to Sylvester Stallone to Mike Farrell to Troy Aikman (his senior year at UCLA). But curiously, I’ve also met celebrities outside of Los Angeles. I got to go on the field at the Oakland Coliseum before a game once and talked to Jose Canseco, Reggie Jackson, Cal Ripken Jr., Dave Henderson, and Rickey Henderson.* In Maine, Susan Sarandon and Tim Robbins got to jump ahead of us in line for a restaurant. And in Chicago while waiting in line for a taxicab, I turned around and saw that Michael T. Weiss (aka “The Pretender“) was right behind us. I don’t really get starstruck any more, though. Living in L.A. definitely drilled into me about not making a big deal over meeting celebrities.

Confessions of a Former Yogi

Check out our review (#linkinbio) of the @brandbla