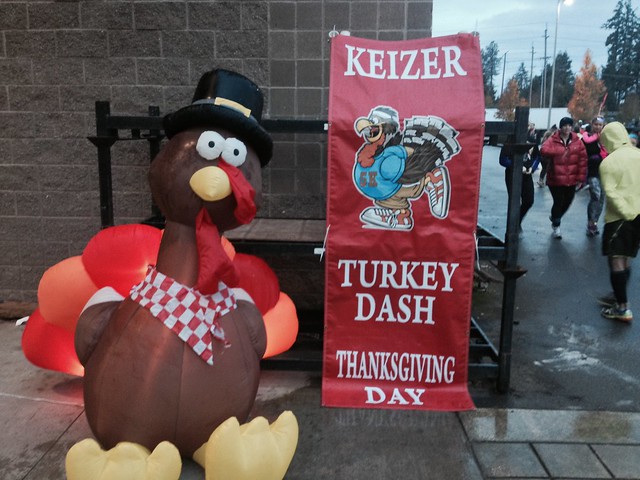 There may have been a little rain, but the 3rd Annual Keizer Turkey Dash got the bodies of about 745 runners and walkers warmed up for the Thanksgiving holiday. In quickly glancing over some of the other local area turkey trots, it appears that in just 3 short years, this race has become the largest Turkey Trot between Portland and Eugene!

This year continued with the combination of tech shirts (black this year) and chip timing, while still adhering to a simple and straightforward course. The race, put on in conjunction with the Keizer Chamber of Commerce, is a flat 5k initially starting at Keizer Station mall and snaking through the Gubser neighborhood. The race began in the Lowe’s parking lot with music getting people motivated. Weather always seems to be the unknown variable, and this year was no different. The inaugural 2012 event was bitter cold and sunny, and last year was still on the cold side but very clear and sunny. This year saw very mild temperatures (about 50), while the rain showed up in spurts throughout the race.

I’m sure there were people who would have been upset with the starting line-up. Even with being in the front 6-7 lines of people, I could easily tell that there were people at the front who were not “supposed” to be up there (read mainly strollers, walkers, and amped-up pre-teens). My hypothesis proved true, but I didn’t find the bunch up in the first 200 meters that I expected. At least for me, the crowds thinned out very quickly and I hardly had to break stride. To be honest, this is not as much of a pet peeve as it is to some people, especially since 1) it was chip timed, so you could have started 15 minutes after the start and still won, and 2) it was a turkey trot – enough said. 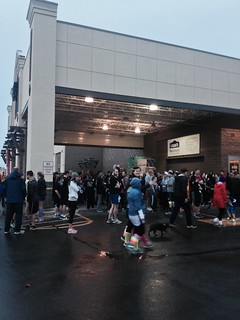 Following a short jaunt through the mall area, we were spit out into the neighborhood after just a few short minutes. There is a tiny s-curve under the railroad tracks which has the potential for bottlenecks. I have been able to avoid congestion over the past few years, but I am guessing it is more of a challenge later on in the race. The run through the neighborhood area is extremely simple with a few arrows guiding runners, as well as volunteers in certain spots in the few spots traffic needed to be monitored.

After the race, runners had access to donuts, fruit, and much appreciated Starbucks coffee and hot chocolate. The post-race area was primarily covered, which offered a bit of a break from any weather that could have reared its head. However, it was nice to know that in future years, a Thanksgiving downpour would not be a complete bummer. Last year, there was a glitch in which immediate results were not available due to some technical difficulties. There were no such issues this year, and there was a touch screen kiosk on-site to enter your bib number and get immediate results. Fancy.

All-in-all, I love this race. Sure it’s close, but it is really well done for a local race and really offers a cool area (with the potential for PR’s) to run at.

The next race by the Keizer Chamber of Commerce is the Keizer Jingle Dash, an extremely fun Christmas light-filled nighttime 5k on December 20. Check out my preview and I hope to see you out there!

Full results of the Keizer Turkey Dash can be viewed here. 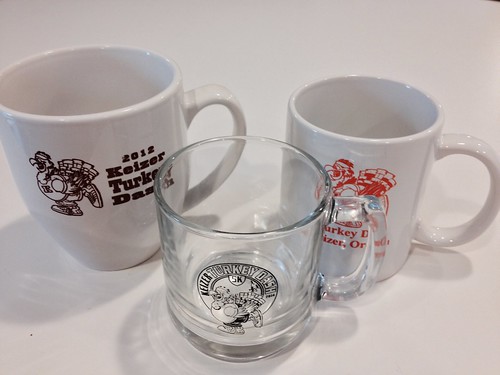