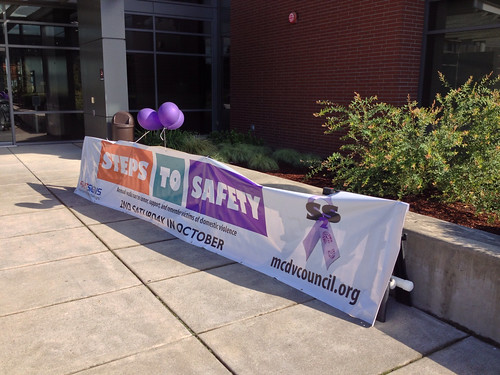 There are only so many race courses to go around. Salem, like any other city, has a few areas that see the majority of race traffic. Portland has Waterfront/Naito, Eugene has Alton Baker Park, and Salem has Minto Brown Park and Riverfront Park. That's not to say that these locations aren't great, but become oversaturated at times. You can only run the same route so many times in a row before it becomes numbing. That's why when I heard that the Steps to Safety 10k/5k (formerly know as Domestic Violence Awareness 10k/5k), had a brand new Salem location, I was extremely pleased and excited. Not only does the race benefit a very worthy cause, but it featured the first time ANY race or public event had been held in the area surrounding the Department of Public Safety Standards and Training (DPSST) building and grounds. Double play!

Start and Finish area, with mini-golf!

Due to the late start (930a for the 5k) and close proximity to home, I decided that it was a perfect day for a stroller race with my 5-year-old. I have been trying a brand new running stroller (it’s awesome), and we were excited to participate together.

The weather started off about perfect for running (low 60’s with some clouds), sans the steady wind that blew through the area. Race registration was a breeze, though the main lobby did feel a little cramped before we took the walk to the start line.

A short little stroll took us to the pumping music and familiar voice of Eclectic Edge getting runners ready for the day. By the time us 5k runners had lined up, the 10k participants were already out on the course. I couldn’t even see any of them from the start. It was then I realized how much open space was out there (230 acres to be exact).  I was very excited to head out onto the course having NO CLUE what I was in for. I love that feeling.

I have been to the DPSST building before (for work), but had never ventured outside the main building. The mission of DPSST is:

To promote excellence in public safety by delivering quality training and developing and upholding professional standards for police, fire, corrections, parole and probation, and telecommunications personnel, in addition to licensing private security providers and private investigators in Oregon.

Since I had a stroller, I decided to head near the back of the pack, but knowledgeable that I didn’t want to be at the VERY end. I don’t mean to sound overconfident, but I knew that my running speed, even with a stroller, was going to likely overtake many runners over the course. So starting in the very back (I have learned) ends up causing more problems for everyone, as I am constantly swerving in and out of runners. This theme continued today, as I quickly headed to the top 1/4 of the pack within the first minute or so and into the top 20 or so runners within a half mile.

We noticed that there were many cool DPSST structures surrounding us as we ran. We passed the firefighting training area and, in between breaths, I described how this was where firemen practiced putting our fires. We also passed what looked like a small “city street”. Come to find out that it “replicates a community and includes a number of streets, houses, professional buildings, a mock school building, and outdoor areas specifically constructed for scenario-based training.”

What we ended up running the majority of the time on was the Emergency Vehicle Operations Course or EVOC. From their website:

The majority of a police officer’s time is spent on patrol in a vehicle. The 1.6-mile emergency vehicle operations course at the academy allows officers to learn critical decision-making and driving skills so they can do their work safely and professionally. The course is designed to replicate the various driving surfaces and conditions found across the state including concrete and asphalt, curves, straightaways, city streets and country roads. Training focuses on officers’ ability to make sound decisions at both high and low speeds.

I found this unique running area to be awesome. While it is little more than paved road, I still found it so cool! There were long periods of straightaways, and one long angled curve (which felt like a NASCAR turn). Over the course, there were more twists, turns, and minor ups and downs mimicking highway driving. 5k runners made one giant figure 8-ish loop before heading back to the finish area. 10k runners made a second loop to double the distance. I personally loved the course and had NO issues with where to turn due to volunteers helping us out.

Blitz with the congratulatory hug to the female 10k winner!

I overheard a few 10k runners getting a little confused on the second loop, so I was unclear if there was a difference in the second loop, some runners just lost track of their bearings, or they were steered wrong. Due to the figure-8 nature, there were multiple runners and walkers of BOTH distances all crossing paths at the same time that made it somewhat difficult to tell who was participating in what distance. Perhaps different colored bibs could be identified next year to assist volunteers with direction, if there are any complaints. For me, and I would suspect the same of most (if not all) 5k runners, the course was straight-forward and simple to navigate.

The finish area included a pretty solid spread of fruit, multiple types of granola bars, coffee, water, and Gerry Frank’s Konditorei pastries – a delicious Salem staple! Awards were given out by Blitz (my alma mater’s mascot) to the top 3 male and female overall finishers and a raffle was held for those who purchased tickets.

I throuroughly enjoyed this race! I’m generally easy to please, but this race seemed to do everything I count on in a small race (about 175 runners). It benefitted a good cause, offered a unique running experience, was well-organized, and the RD’s and volunteers were excited and committed to the race. This race had all that. I don’t ever expect perfection in smaller races, but this race provided me with everything me and my daughter could have hoped for. I am glad to have another Salem running route under my belt! We will be back again for sure!

Full results can be viewed here.