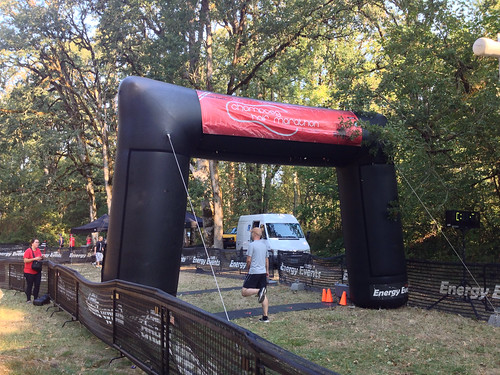 Last week, I received a message that Brian, our speedy blogger, was going to have to pull out of the Champoeg Half Marathon and 5-miler due to a scheduling conflict. I had already ran my half marathon for the month (Hagg Hybrid), but slid in to fill his space rather than let his bib go to waste. I had run at Champoeg Park before (2012 Ladybug Run 10k)so I was excited to see more of the park and tackle some of the canopied trails in this beautiful area. As I reached the park around 8am, I compared my temperature gauge with the beautiful morning outside my car windows. The temperature was already past 65 degrees and climbing, and the skies were clear as clear could be. I actually remember saying out loud to myself, "this race should be starting now". The last weekend of Summer was truly not going to let up for anyone or any race.

The pre- and post-race shaded area.

Energy Events typically puts on a great show, and this race was no different. Parking logistics were ironed out well and the pre-race area, while generally small, allowed a ton of open and shaded area for stretching and warm-up. The bounce house was up for the daycare they offered and music was pumping to get the juices flowing. There were a handful of tents on-site and there was definitely a little late-summer BBQ vibe to the whole event.

As we lined up and headed into the park, I was feeling fast. Not Brian Bernier fast, but fast enough for me. We started by doing a mini-loop through the western part of the park switching off between running on the quiet park roads and paved trails. After about 3 miles, we took to the beautiful canopied trials that I am familiar with. It truly is a beautiful area to run, with the river close enough to see and the mossy trees creating a shade-filled route. Even if you don’t run in a race at Champoeg Park, I strongly suggest you make a plan to at least get one training run in here at some point.

I knew from experience that my 7:00min/mi pace through the first 4+ miles was not maintainable, but I was still feeling solid. At about mile 4.5, we left the comfort of the shaded trees and comfortable park trails and did a little bit of a climb up to the rural residential Butteville Road. An aide station greeted us at the perfect time – as this was the first real time I felt the sun and heat. Couple that with a decent climb following mile 5, and I could just feel my speed coming to a screeching halt.

At that point, I knew it was going be a challenge. I remembered from briefly glancing over the course map that there was a long straight stretch before we turned around and headed back to the finish. I was prepared for that. What I was NOT prepared for was just the blue skies, hot sun, and an asphalt road stretching never ending into the distance. That’s not to say that the countryside wasn’t beautiful, but I didn’t have the energy to really soak it in. I almost felt like I was lost in the desert, heat rising off the ground, me struggling to put one foot in front of the other, and fearing that if I stopped I would never be able to start-up again. What was wrong with me?!?

The view of the finish line. Such a pretty sight – in more ways than one.

While I had checked the maps, what I forgot was that there was a sharp 1/2 mile jaunt  north to mile 8 and the turnaround. That stretch was really a mind-jumbler, as I hadn’t been expecting it. That stretch was also the longest without water, which would have really helped me. I know a lot of (smart) runners were carrying hydration with them, but I typically don’t run with water for half marathons and I severely regretted it.

My pace got progressively slower and slower with each passing mile and even once we returned to the friendly confines of the shade about mile 10.5, my only thoughts were really just finishing as opposed to achieving any sort of record or energy kick to the finish.

And finish I did. Barely. Never has a hot dog and a beer tasted so good. It was truly the Summer-iest last day of Summer in the history of Summers. Energy Events can not, and should not, be blamed for the heat, as next year’s event could be 65 and cool. You just never know. I want to thank them for a well-organized and beautiful course. But after this race, I am about ready for some rain.

Results for the race can be found here.

1 Comment on Matt vs. the Sun: A Run Oregon review of the Champoeg Half Marathon