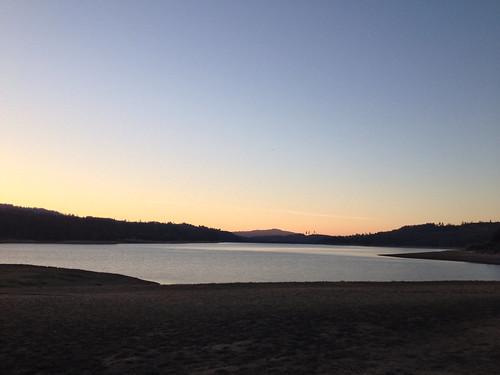 Hagg Lake has seemingly been hit with disasters the past few months. From boats catching on fire, to dead bodies being found, to the current fire causing nearby residents to evacuate, the summer of 2014 has not treated Hagg Lake very well. But for one fantastic day on September 13, the skies were blue, the weather was pleasant, and the Hagg Hybrid rocked the house. The day featured a trail half marathon, a hybrid (trail & road) marathon, and hybrid marathon relay on the roads and dirt tracks around the lake.  But first - breakfast. The oatmeal buffet was a little close to race time, but did offer up some sustenance for those of us who had to wake up ridiculously early to drive to Hagg Lake.

After a semi-confusing descriptor of the race course, all participants (sans those doing the second leg of the relay) took to the paved street for a mile or so. I’m sure it wasn’t as confusing as it initially sounded, but since the relay and the marathon looped around twice, there was a need to describe which route on which loop – which gave an already hazy morning mind like mine a little too much information. Luckily, I guessed right.

After the initial stretch on pavement, the half marathoners headed onto the canopied trails. I remembered hearing that we needed to be on the lookout for orange cones, as they would be our guide. There were a few runners ahead of me, yet well out of view, as well as some runners behind me who I had distanced myself from. I will admit that I was a little concerned I had veered off path a few times, but those orange cones always popped up to allow me to exhale.

View from the Hagg Lake dam

The only little snafu occurred near mile 3 or so. I hit a Y in the trails and the orange cones (which had been on the sides of the trail), was placed directly in the middle of one the trails. As I ran up on it, I wasn’t sure if that meant if I was supposed to follow the cone OR to not go this route. I ended up following that path, which spit me out up on the paved road with the other runners. I actually stopped for about 75 seconds wondering if I had chosen incorrectly. However, a few other half-ers came thundering up the same trail, expressed the same confusion, and we decided to continue together on the road regardless. We figured there was an aid station coming up soon anyways, so even if we left the trail prematurely, we wouldn’t be differing our distance too much.

We were right, as around the next curve was the first aid station, which was manned by Joe Dudman and the Langleys – all of which are Run Oregon bloggers! It was great to see them out there! We continued along the paved road, crossed the dam and circled around an abandoned campground on the eastern side of the lake before heading back into the trails around mile 5.5.

I will say that these trails are AWESOME. I am not typically a trail runner, aside from the events that go on by Run Wild Adventures each winter, and those trails are typically wet and muddy. These trails were very well maintained and the surrounding foliage really made it great. My phone actually died around mile 7, which ended up not being a bad thing. The serenity of the rugged trail, the sounds of the birds, and the wind blowing through the leaves really demanded no music.

The second half of the trails were definitely more difficult than the first half. I remember thinking that I imagined the marathon-ers were going to really be pushing themselves in the final 7 or so miles of the race with some rolling elevation switching.

I found myself running with Vancouver native, Dan Donovan, for the majority of the race. He caught up to me in my confusion at mile 3 and we continued in sync for the next 8 miles or so. We chatted a bit to pass the time on the roads and trails. He had just completed his first full at the Eugene Marathon and this was his first actual trail race. We went back and forth, with me staking to a bit of a lead when we were on the trails, and him always catching back up on the road sections. He finally shook free around mile 11.5, or so and finished about 45 seconds ahead of me. He was a great running partner and having a little super-friendly competition probably helped me run faster than I would have otherwise.

Following the race there was some debate as to if our initial course decision, and a subsequent spot where we thought we were guided incorrectly (looking back, this was not the case), led us to not exactly meet 13.1 miles. I was worthless (dead phone), but two other runners stated that their Garmin’s showed them at almost exactly 13 miles, which was pretty close considering how much time we were covered by trees and in valleys. We received finisher’s coffee cups – which I LOVE. I have mentioned before how many tech shirts I have accumulated, and this little addition is a perfect alternate.

For half-marathoners and those completing the first leg of the relay, the first post-race meal consisted of delicious bacon, eggs, potatoes and coffee. Bless the Barten’s (RD’s) hearts, as the sheer awesomeness of Huber Timing and solid post-race food contributed to electrical generators working their butts off too. Though I wasn’t around to experience it, it was a genius idea that there would be a second lunch BBQ meal for those finishing the marathon. Great attention to detail there.

All-in-all, I supremely enjoyed this race. It’s great how a low-key race with a solid course and nice race directors can really get you amped up and drooling to hit the trails again. Due to the distance, Hagg Lake remains a tough area for me to get too, but it hasn’t completely pushed me away. Quite the opposite in fact.  If you haven’t run at Hagg Lake before (or even if you have), Run Oregon strongly recommends registering for the ORRC Hagg Lake Runs (25k and 50k) in February 2015!

Results for the Hagg Lake Hybrid can be found here and here.