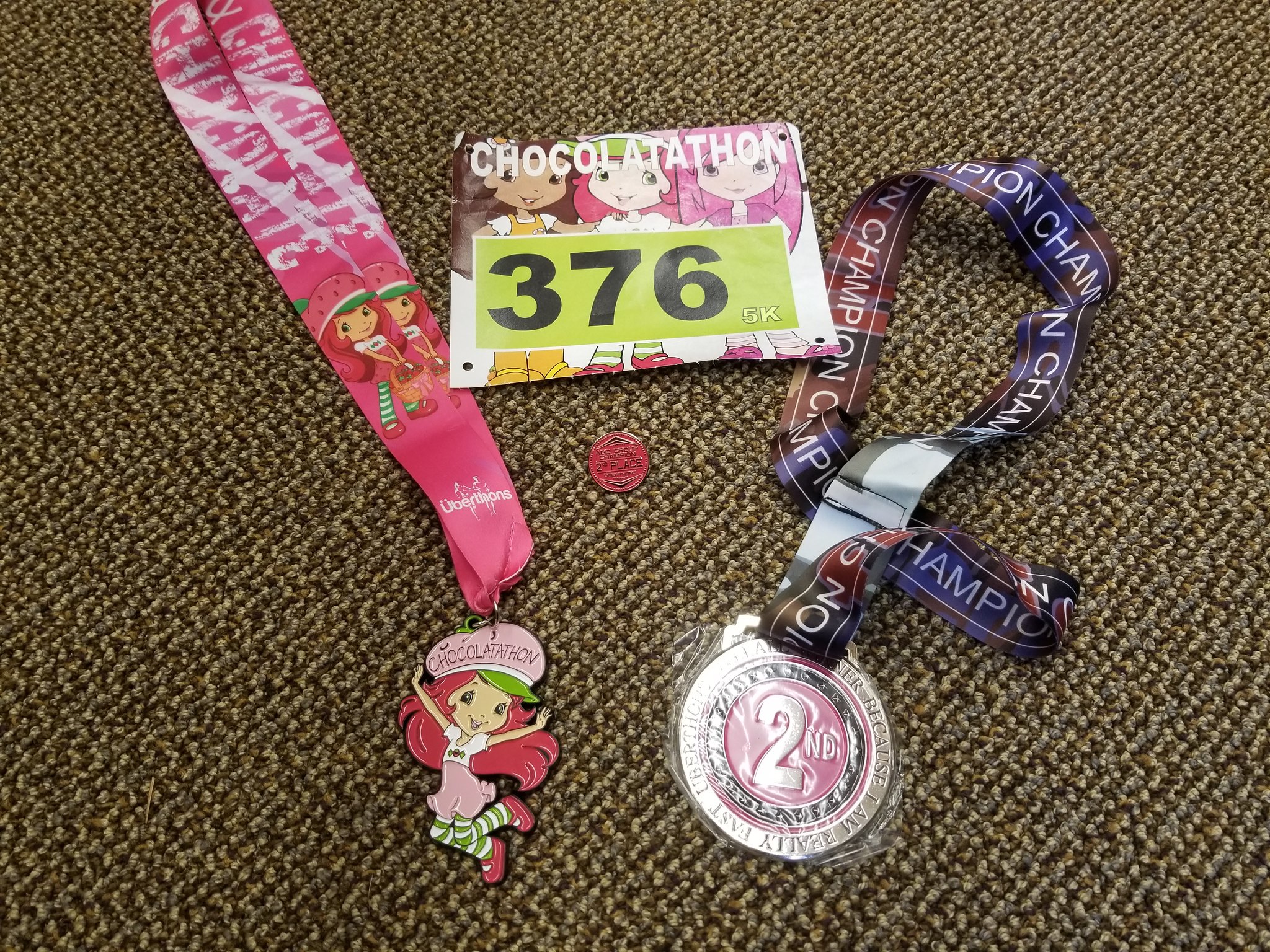 The second Uberthons race of the year was the Chocolatathon, which was exactly what it sounds like: a chocolate-themed race. Race day was February 15, a day after Valentine’s Day, which may explain the color scheme of the bib and finisher’s medal.

For a while now, Uberthons has put out a “last-minute news” link with updated information about weather, parking, and other logistics. Because the race medals were produced in China, Uberthons had previously warned that — out of an abundance of caution over concerns about COVID-19 infection– there would not be race medals available until later in the year. The last-minute news link reversed this decision, however, because Uberthons had been able to determine that the medals were produced and shipped before the outbreak of COVID-19. Yea!

There was also a warning about limited parking due to ongoing construction at Cook Park. I guess this was a Goldilocks level of race participation because parking wasn’t a problem. 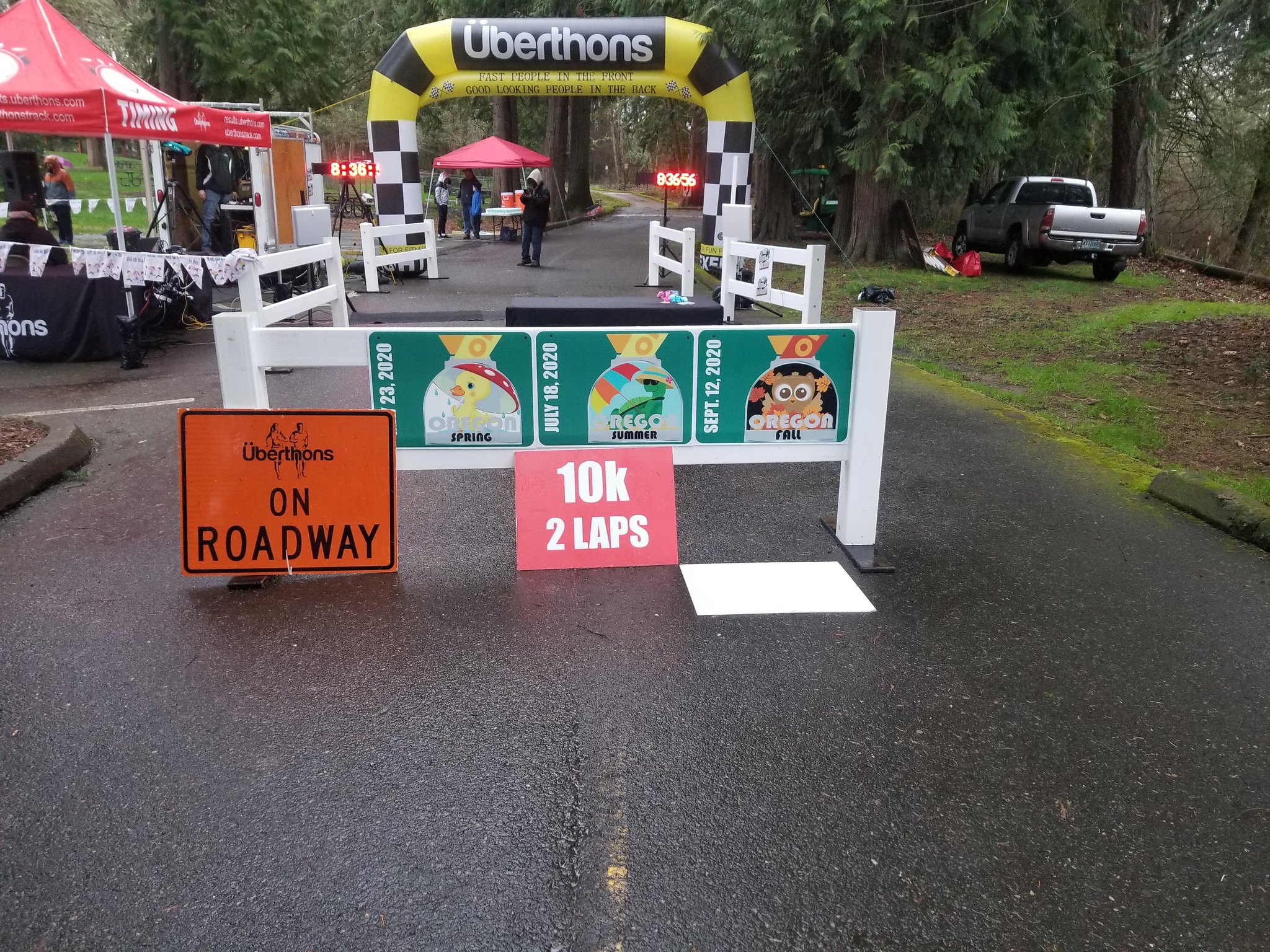 Waiting for the start of the race

I arrived around 8:20, almost half an hour before the start time. I picked up my race bib, attached it to the bottom of my tech shirt, and looked for familiar faces. Fellow Run Oregon blogger Julie Mullins and her spouse Jerry were there, and Eileen Kuffner (who so ably handles the results kiosk and age-group winner pin station), and even a former student of mine who recognized me.

It was a cool morning, maybe even cold (my car dashboard had reported an outside termperature in the high 30s during my drive to the park), but it didn’t feel frigid. At times there was light drizzle in the air. I probably didn’t need the shell jacket that I was wearing, and I wondered if I had overdressed.

I was also feeling a small degree of trepidation. I hadn’t raced since late October, having missed the Winter Event because it was Chinese New Year’s day, and last year’s Turkeython due to travel. And I’ve been struggling to regain my speed.

When the race started, I was in the second wave. First wave, second wave, last wave — it doesn’t matter because of chip timing.*

* Unless it’s the USTAF overseeing things, in which case you can get the ridiculous result where Erin Gregoire ran a 2:42:55 at the Houston Marathon, faster than the 2:45:00 cutoff, but because she was put in a back corral, her gun time was 2:54:54, with the result being that she did not qualify for the U.S. Olympic trials.

With almost 100 participants in the 10K and nearly 250 in the 5K, it was a lively crowd, but we were spread out enough that there was ample running room.

There have been a number of variations on the Cook Park route that Uberthons uses, with one incarnation looking kind of like a beaver. I always found that one to be tough mentally because the return path brought runners near the start/end line, only you had to keep going in the opposite direction for another out-and-back. The current course, which is kind of a throwback to the original one, front-loads the out-and-back. From the parking area with the covered picnic area, we headed out toward the railroad tracks, and then turned right to go across the footbridge all the way into Tualatin Commons Park. One 180 degree turn later, it was a (mostly) straight shot to Durham City Park, where at the far northeastern part of the route was a short, steep hill in the woods.

After that, it was downhill, literally (for a brief part) and figuratively. On my way back to Cook Park, there were a few 10K runners heading back out for their second loop(!). Then I reached the playground and the 3-mile marker, and it was a sprint to the finish line. 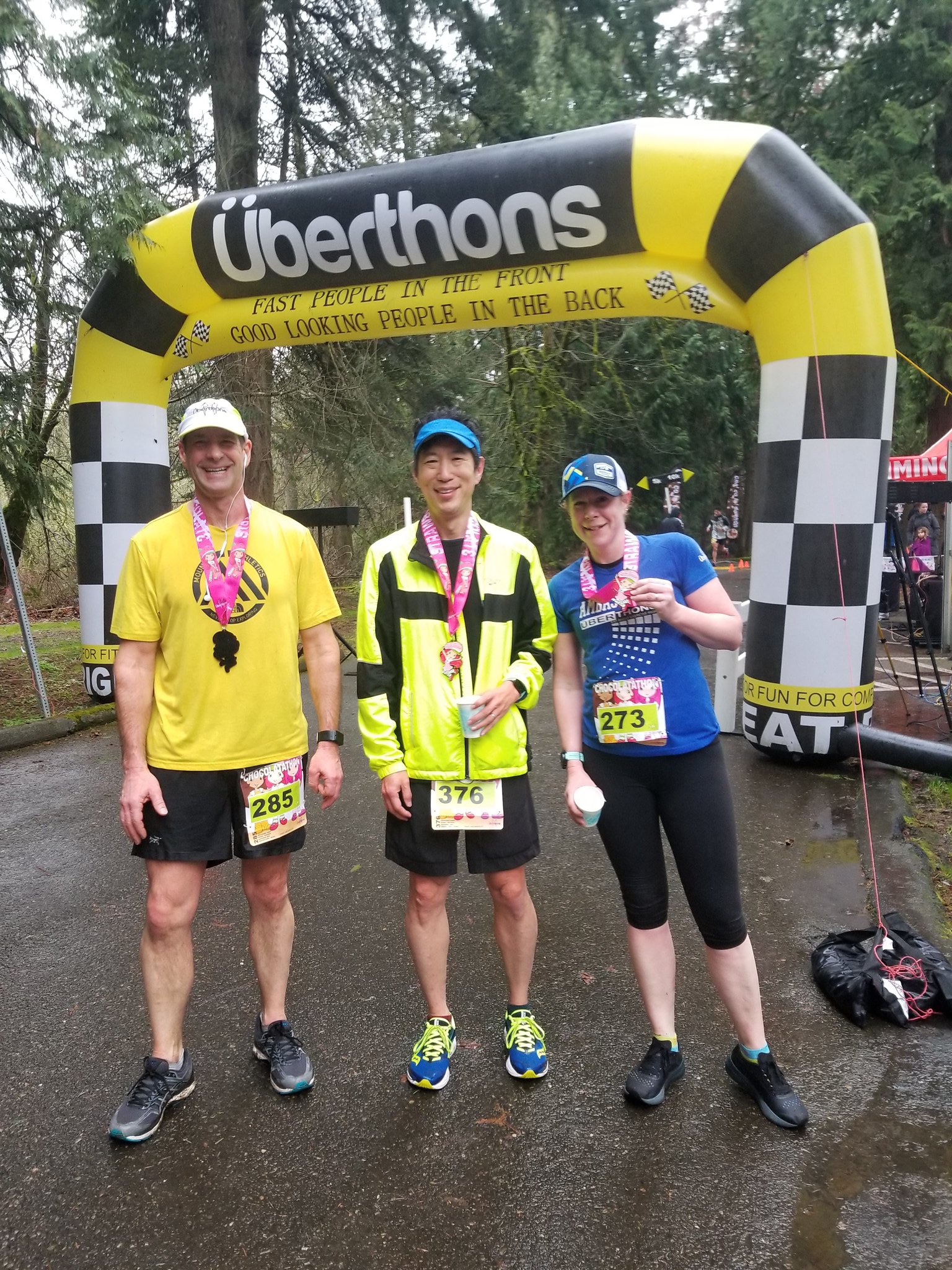 DuWayne Olson, me, and Julie Mullins

With the race over, I chatted with Julie and Jerry Mullins for a while, and then we headed over to check results and awards. With age-group winner pins going three deep in five-year increments, there might be close to a hundred pins given out at a decent-sized event. I managed to finish third in the male 45+ category for the 5K, but because Jerry finished second overall and there’s no “double dipping,” I moved up to second in the master’s category. (Thanks, Jerry!)

Oh, and the chocolate! I forgot to take a picture of the food, but there were chocolate chip pancakes, strawberry shortcakes, and more! 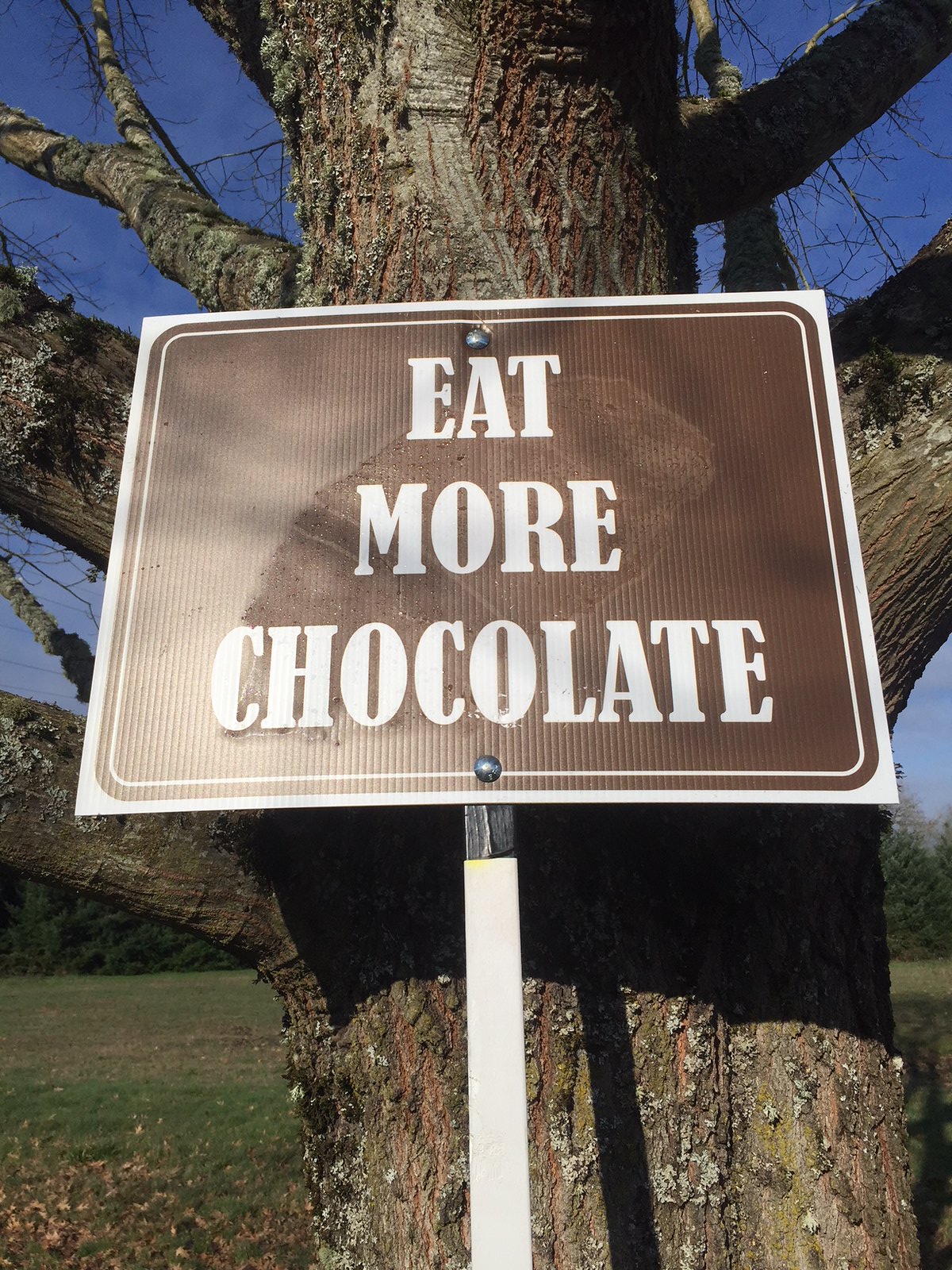 For full results of the 5K and 10K, click here.