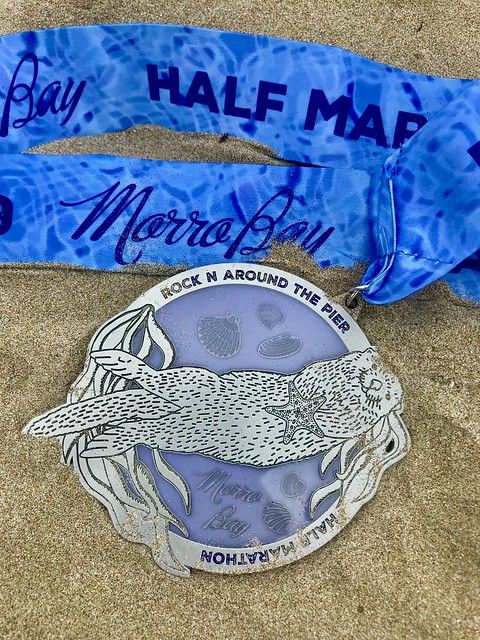 From Thursday – Sunday of last week, my wife and I experienced the wonderful Central California Coast in the town of Morro Bay. We will have a few posts going live over the next few weeks highlighting the town as a whole, as well as why you should consider taking a “MorroBaycation”, but one of the main reasons we were in town was to participate in the 50th annual Brian Waterbury Memorial Rock to Pier 6-miler and 8th annual Rock ‘N’ Around the Pier Half. 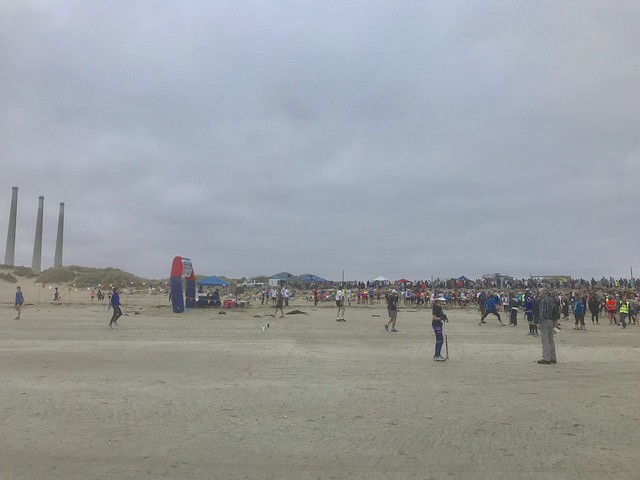 Morro Bay is home to only about 10k residents, but increases by 10% on their biggest race day of the year. It’s a very simple, yet mind-bending race. Both of these races start at the area’s major landmark – Morro Rock – and run on the sand in the morning at low tide. The shorter distance ends at the Cayucos Pier 6 miles down the beach, while the half comes back along the beach, heads off on a paved section for a mile or so, and then returns to finish back at Morro Rock. It’s really trippy to basically be able to see the ENTIRE race course ahead of you. I mean, this may be one of the only races out there that can say that. 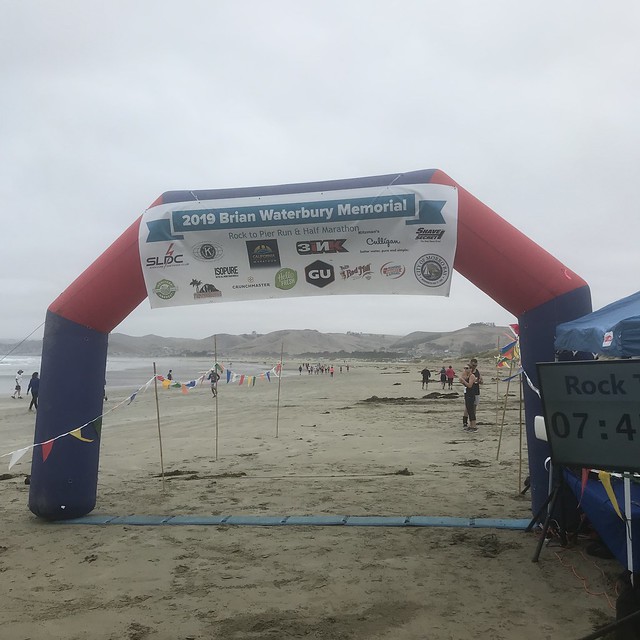 If you look close, you can see the end of the 6-miler waaaay down there at the end.

On race morning, I was able to make a quick and easy 1.2 mile walk to the start line from our hotel at 456 Embarcadero. We heard from the race director that parking was always their biggest challenge, as there are limited spots at the start, and street parking can fill up quite rapidly as well, so being able to walk was fantastic. And considering that about 50% of participants are coming from out of the county, there are a lot of cars to take care of. That being said, there were lots of volunteers directing traffic and signs along the way that notified runners that they couldn’t park in private restaurant lots, so it seemed like things moved about quite easy. 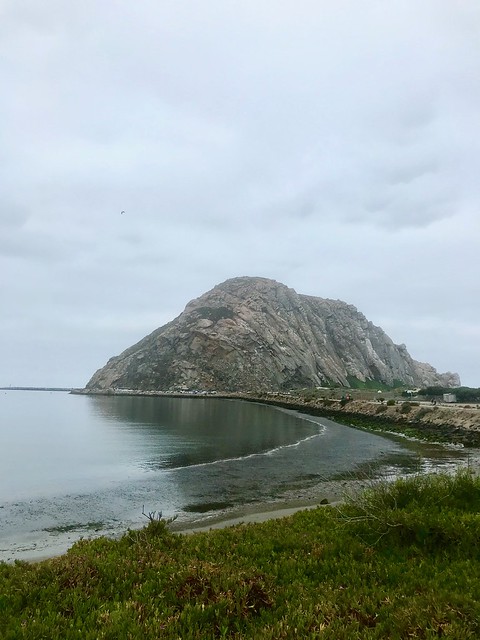 On my way the race start. Not a bad pre-race stroll.

As I arrived at Morro Rock, there was music on the loudspeakers, vendors were setting up, and tables for the after-race festivities were being laid out. I remember just saying “wow” at the energy of this small town and the amazingly unique and beautiful backdrop of the ocean, beach, and Morro Rock. I have run a few beach runs on the Oregon Coast and this was relatively reminiscent of those. But being from out of town, and experiencing everything for the first time, it was a surely a fantastic vibe. 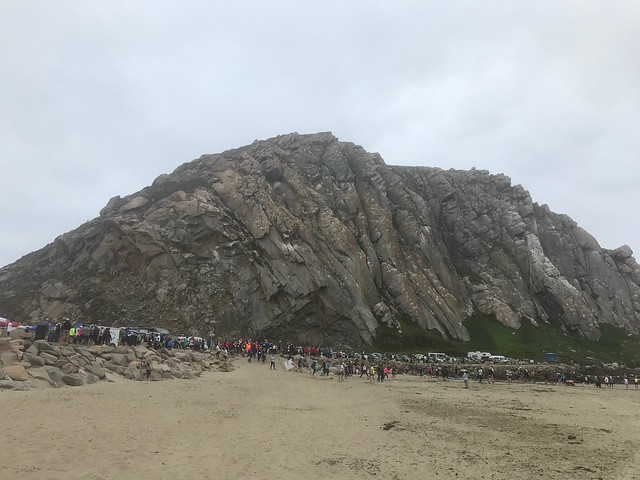 I did a little bit of pre-race running on the sand, just to get my bearings and figure out my best route. Essentially the course is from point A to point B (and back, in the case of the half) along the beach with whatever route you really wanna take. Shoot, you could probably swim it if you wanted to. Obviously this was great, as it allowed for the big crowd of runners to thin out along the way. As 8am hit (with a low tide shortly thereafter), the first runners took off and we were on our way. 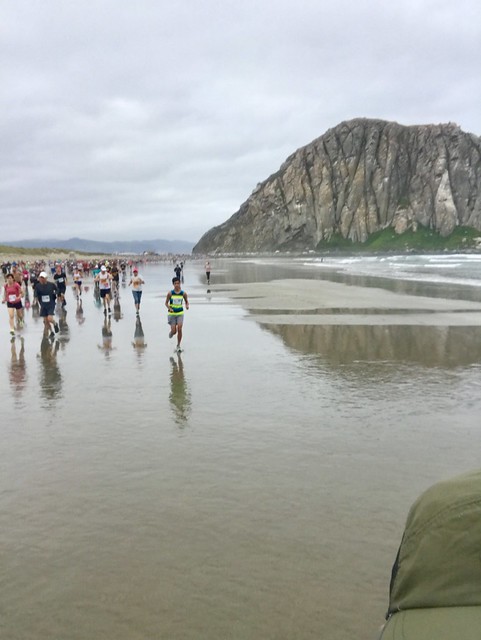 Earlier in the recap, I used the word “trippy” to describe seeing the entire race course, and I’ll echo that language again during the run. Even with a typical morning coastal fog, it was still easy to see the pier in the far distance and feel like it was not that big of a deal. But during the run, with a relatively unchanged landscape in the immediate vicinity around you, it could sometimes feel like you weren’t moving at all. I remember hitting the third sign and feeling an “only mile 3?!” come out of my mouth. It’s just that running past sand, rocks, and shells over and over feels like some weird Matrix deja vu feeling of “haven’t I been here before?”. 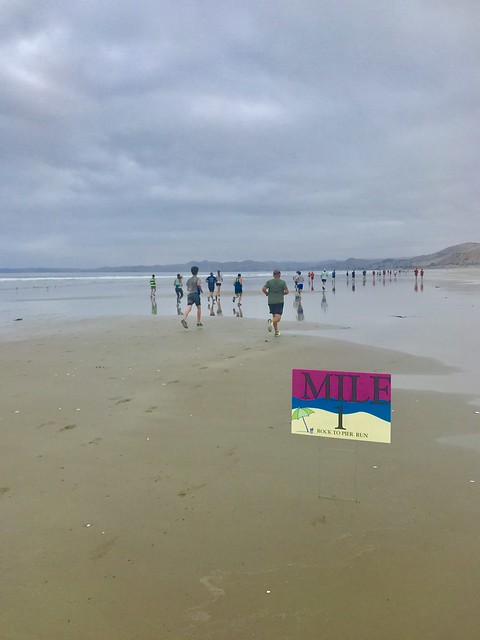 However, the sand was pretty dang consistent, and while I was relatively slower overall than usual, it wasn’t a noticeable difference that running on sand can sometimes be (except for one short section – more on that later). And there were some spots along the course that offered a fun change of pace. Obviously, as this was run on the beach at low tide, there were some natural elements that reared their heads. Obviously, I tried to avoid the main puddles, but there were a few times that necessitated doing some jumping and maneuvering over water. There were also some great rockier outcroppings that were a blast to run through and felt otherworldly, if only for a few seconds. On the way back, with the tide a little different, it necessitated doing a bit of rock hopping to keep from running into calf high puddles. 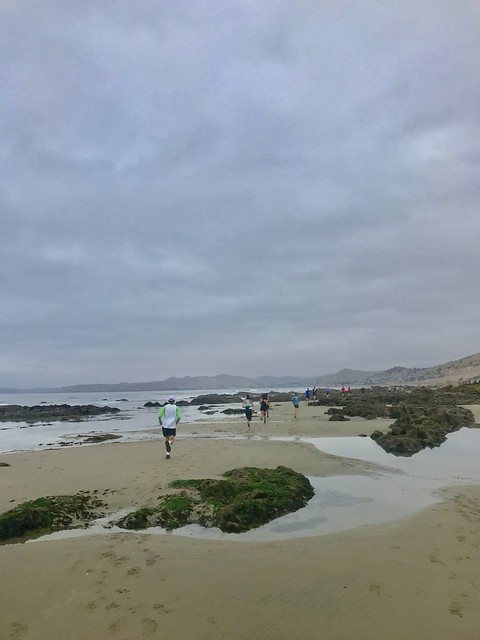 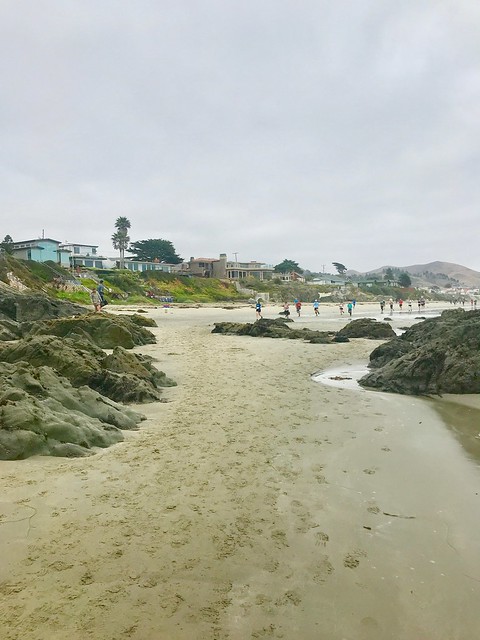 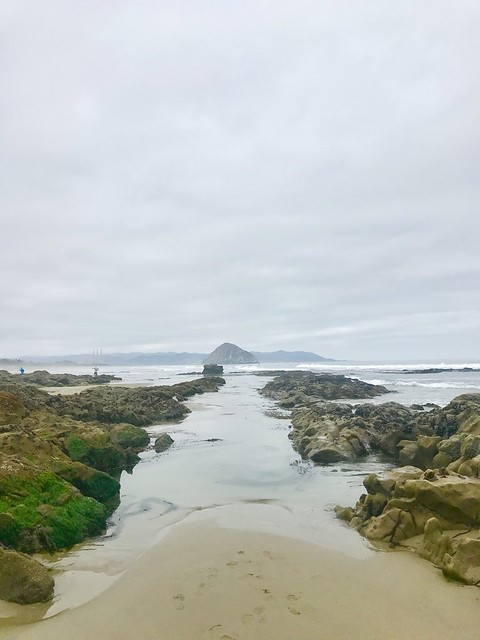 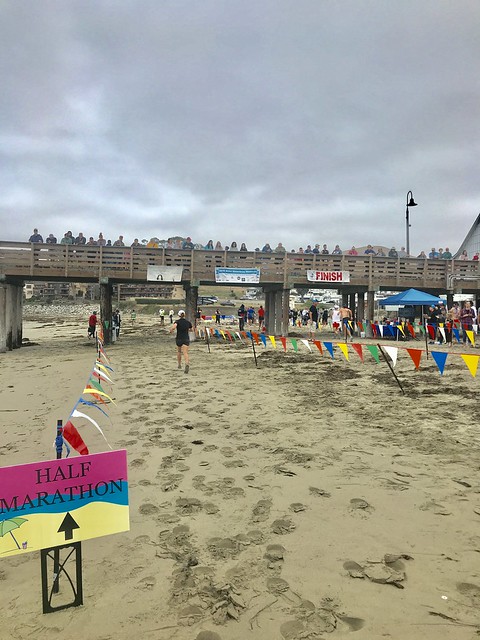 It was a lot of fun to run back on the beach, as it allowed for times to wave, high five, and give/receive encouragement from other runners along the way. From high school runners, to small kids, to parents with strollers to walkers, there was a very diverse group of participants to interact with the entire time. I loved it!

Though the half marathon runners were well-warned about the short loose send section at mile 10.5, my body was not as well prepared. In order to make up the additional 1.1 miles, we headed off the beach for a paved trail loop in a nearby park. That necessitated leaving the friendly confines of packed sand and plowing through the loose stuff. It was awesome that they had two volunteers with megaphones shouting encouragement at this juncture – as it was much needed here. I felt like I was essentially walking and each full step forward kicked me back a half step or so. It was slow going, but was luckily just short enough to mentally and physically get through it without it feeling overdone. It added to the challenge and I felt it enhanced the half – not detracted. 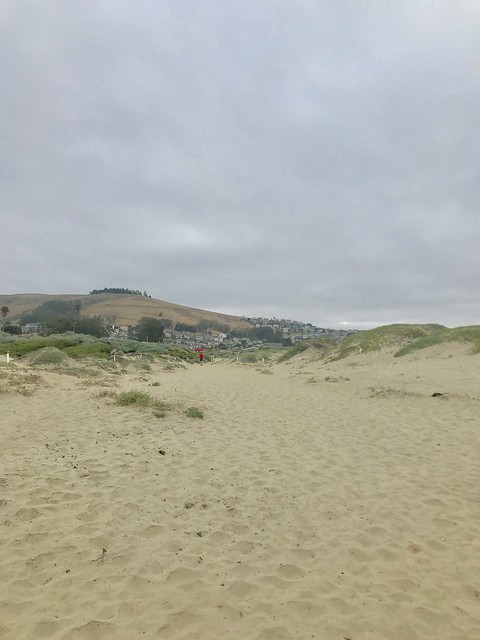 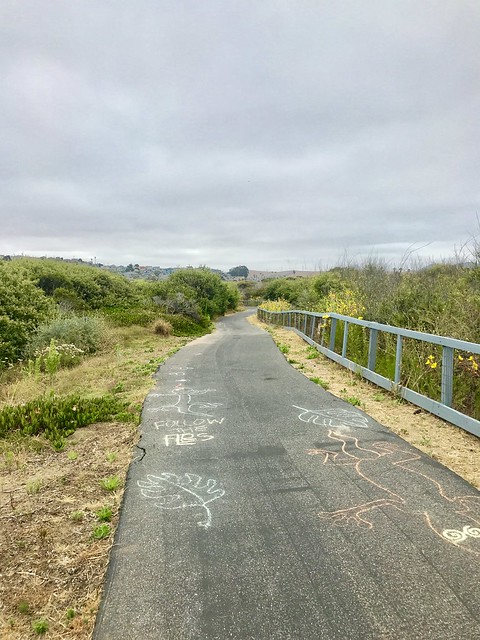 The final mile+ back to the finish at Morro Rock was definitely a challenge – but almost more mental than physical. We had put in 12 miles on the beach, had some wet socks and shoes, and had just powered through a tough sandy section. Then toss on top of that the fact that towering Morro Rock seemed so close, yet was still over a mile away. It required a little mental fortitude to push to the end. After finishing, I truly felt like I had accomplished something great and this will absolutely be one of the more memorable races in my repertoire.

After the race, there was live music and tables to spread out at to chow down on the free post-race meal (pancakes, sausage, and delicious local strawberries). I picked up a can of nearby Whalebird Kombucha to enjoy and just soaked up the experience. The medal was great (see above) and the race shirt was fantastic (see below), but it was more about trying out a race in a new location that really sealed the deal for me.

As an Oregonian, I can confidently say that anyone from up here would love this great and unique race experience. I know I won’t soon forget it. 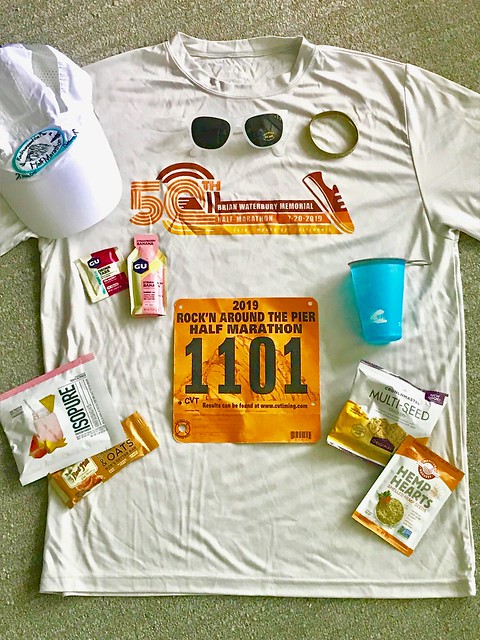