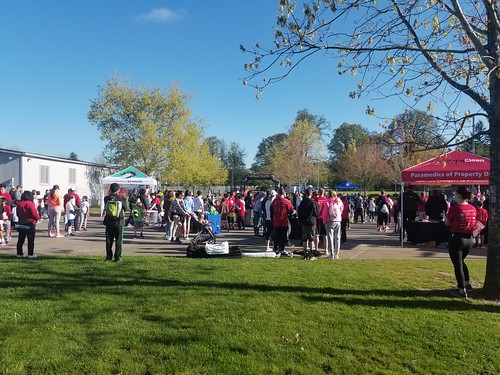 On April 28th, I got to run in the 7th (and possibly last) Stoller Community 5K race. As you might guess from the name, this is a local community race centered around Stoller Middle School in Beaverton. Local, yes. Small, not so much — over 550 runners finished the race, which is all the more remarkable considering that the Race for the Roses took place the same morning.

I arrived at Stoller Middle School a little after 8 in the morning. Race time was at 9, but I arrived early because I hadn’t been able to make it to either of the pre-race packet pickups on Friday or Saturday. It was sunny and bright but only in the 40s, which would be close to ideal for running, but I didn’t think I wanted to stand around for close to an hour. I picked up my race bib, race shirt, and race bag, and then scurried back to my car. 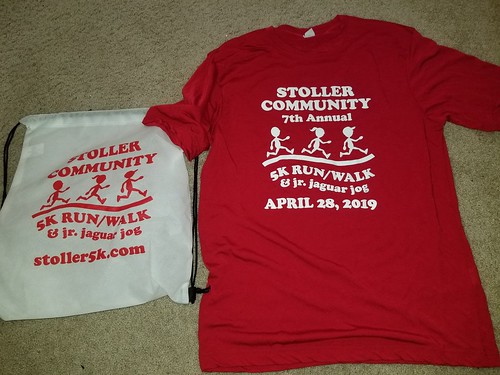 I waited until 8:45 and then went back to the starting area of the race, which was the back side of the middle school. One nice benefit of the race location was that the school building was actually open, which meant that there were real bathrooms with running water!

The emcee called for us to start lining up and to self-sort by approximate race pace. Volunteers were holding signs with pace ranges, beginning with 5:00-7:00 min/mile. I lined up in the next group. The volunteer with the 5:00-7:00 sign looked at me and motioned for me to join the front group. Flattering, but I’m not running at that pace right now. 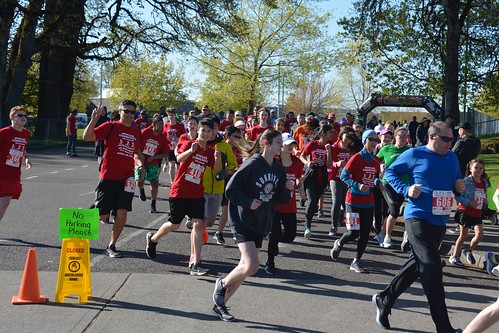 As you can see in the picture above, most of the runners were actually wearing their red race shirts. That coordinated well with the pink hoodies the race staff was wearing, and the blue shirts for the race volunteers. Only a small number of runners (including me) weren’t wearing the race shirts. 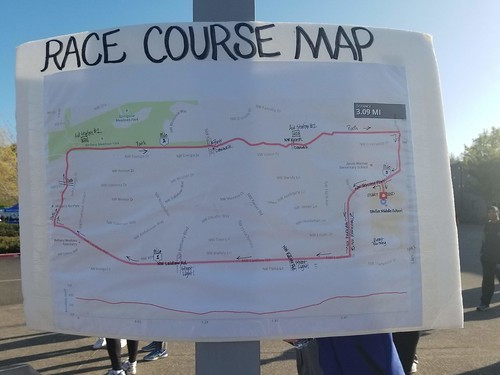 The race course began on the back side of the middle school into the local neighborhood, exiting on NW Laidlaw, where we had a nice downhill cruise past the 1 mile marker. The stretch along Laidlaw took us along a residential neighborhood on my right and a commercial zone on my left. It was Sunday morning so many of the stores were closed or, if open, not very busy. However, there were plenty of race volunteers posted along the route to cheer us on, and to control the traffic coming out of the residential area.

One thing I noticed about the runners was how many kids there were! It seemed like at least half of the middle school had turned out for this event, and a lot of them were really fast.

About 1 1/3 miles into the race, I reached the hard right turn; we left the street and moved on to a paved trail. Not long after, we reached the aid station. I was feeling all right so I skipped the water. Of course, it was then time to pay the piper for that early downhill stretch. The return stretch on the trail included a long ascent that the race organizers called their “heartbreak hill.” It wasn’t quite that, but it slowed me more than hills usually do.

Finally, at NW Skycrest, it was time to turn back to Stoller Middle School and the finish line! Post-race treats included a couple of food trucks, candy for age group winners, and more. 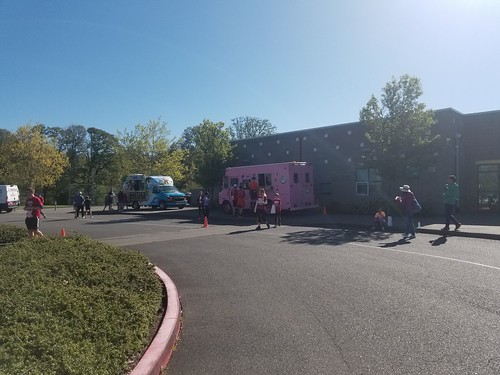 As I noted at the beginning of this recap, this was possibly the last time for this race. Race director Elisa Bennett started the race seven years ago as a way to bring the community together. Judging from the turnout, I’d say that she totally crushed that goal. However, in a post-race email to participants, Ms. Bennett said that this was last year as race director. I hope this race continues despite her retirement as race director. It had a welcoming environment (and, considering how most participants were local, there was ample parking for non-locals like me), the race staff and volunteers were terrific and full of energy and spirit, and the race participants were an unusually diverse mix.

Race photos are available here (free download until May 29).