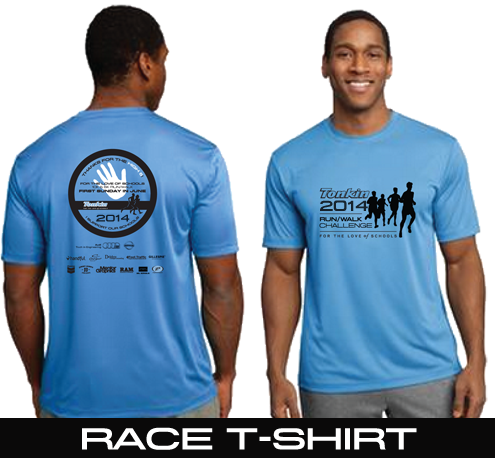 Races often come with race shirts. Is it "okay" to wear the race shirt at the race? I should say upfront that I'm not trying to be some kind of universal arbiter of what is or what is not acceptable. There's especially no right or wrong answer on this topic, and people should obviously feel free to wear or not to wear race shirts at the race. However, I noticed that Runner's World put together a debate on this very topic a year ago. The "no" argument boiled down to (1) don't wear anything for a race that you haven't tested for chaffiness, etc., or you may be very sad afterward; and (2) it's pretentious to wear it before you've finished the race. The "yes" argument responded with (1) it'll make figuring out which race picture goes to which race easy; and (2) chaffing isn't likely to be an issue with a 5K. Runner's World readers weighed in strongly on the "no" side by over a 2/3-1/3 split.

Now, my own preference (rule?) is to avoid wearing the race shirt on race day.*

* The one time I can remember wearing the race shirt was during the 2012 Turkeython. That was because the race shirt normally cost extra, but race organizer Darwin Rasmussen generously gave me one, so I felt I should wear it.

Here are my reasons:

1) I haven’t seen any 5K or 10K race shirts that say “finisher” on them, so I realize the “it’s pretentious to wear it before you’ve finished the race” isn’t literally accurate. Still, I like to treat the race shirt as a finisher’s item, particularly for races that don’t offer finisher’s medals.

2) A lot (but not all) of race shirts are made of cotton. I’ll wear the Zombie Apocalypse Run’s “Zombies hate fast food” cotton shirt just as a normal T-shirt (it frequently gets laughs at the not-so-healthy kinds of places I eat lunches at), but I’m not going to go running in a cotton shirt.

3) I don’t have many race photos of myself, so it’s usually not too hard to figure out which race any individual picture is from. However, by not wearing the race shirt, I can spot myself more easily in any pictures in which a big mass of runners are captured.

4) I’m not superstitious, but I do have some running clothes that I just feel faster in. Usually black tech shirts and black shorts. Kind of like a running ninja, I guess. In a related way, there are other running clothes that work better for the more extreme temperatures – Columbia Sportswear Omni-Freeze for hot days, and Omni-Heat for frigid ones.

Does this mean I would never (except for that one Turkeython) wear a race shirt to the race? Well, I wouldn’t say “never.” After all, some race shirts are … um … probably not something I’d ever wear other than at the race itself, so not wearing it at the race is tantamount to never wearing it. (I can live with that. I’ve got too much running-related clothing as it is.) Also, I could imagine showing up underdressed for a race and putting on the race shirt (if there I hadn’t gone to early packet pick-up) for an extra layer of clothing.

What about you? Do you wear race shirts at the event?