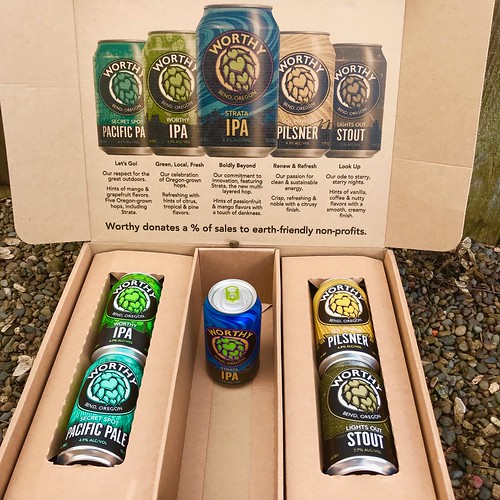 For those of you who didn’t read our previous Kegs & Legs post on Worthy’s rebrand, here’s a little reminder:

The brewery itself has also expanded, building a Hopservatory on site, as well as putting the Taps and Tacos downtown location. One of the things that stood out to me on my initial experience years ago was their commitment to homegrown hops in a hop research facility partnership with Oregon State University. Their brewery grounds have a greenhouse and garden beds committed to coming up with the latest and greatest varietals. This has just been one of the focuses on sustainability and being “green” and their new rebrand aims to showcase that.

We are very excited about all the new stuff that Worthy has going on. They have 117 rooftop solar panels on their main pub – 56 of which are dedicated to heating and storing water so that their boilers don’t have to work as hard to head the water used to brew. These panels also provide about 10% of their power each year. They also re-purpose their spent grain 3-4 times per week to a local cattle farm – and then they purchase beef from that farm and use in their dishes when they can. They are also transitioning from 22 oz bottles to 16.9 ounce recyclable bottles on 9/1/19. I find it hard to imagine that you can’t get behind the solid work that Worthy is doing – on both the beer and environmental sides – so make sure to support them this year and beyond!

We were sent a sample pack and are talking about the non-IPA offerings here today – Secret Spot Pacific Ale, Lights Out Stout, and Sol Power Pilsner.

Head Brewer Zach Brenneman describes the Secret Spot Pacific Ale with a description that is right up our alley: “It’s a beer you can drink after your trail run…and then have one [or two] more.” The taste profile definitely fits that bill. There are 5 Oregon hops in the beer, but it is not overpoweringly hoppy (it’s only 33 IBU’s). It has that familiar IPA taste with a hint of grapefruit, but is pretty mild and we agree it’s a solid option after a run.

The Sol Power Pilsner name is an homage to the solar panels mentioned above. I feel that this is a really solid summer beer with a light flavor but still relatively complex taste. This style of beer isn’t one of my go-to’s (yet), but more stuff like this one would absolutely lead me that way.

I have been venturing a tiny bit more into darker beer offerings and it may have actually been the Lights Out Stout that started me on that path. I remember heading over to Worthy’s main space late last summer and deciding to forego my typical IPA for something different. I opted for this one and was really blown away by how nice a simple stout could be. I absolutely get the vanilla and coffee profiles in this beer – it tastes almost like a cold brew to me actually. It’s super smooth and enjoyable in all weather – something I don’t generally say about all stouts and porters.

Worthy also supports the running and cycling communities as well. They hosted the pre-event for this past year’s Tour des Chutes, are frequently the starting point on the Bend Beer Chase, and provided post-race beers at numerous events.