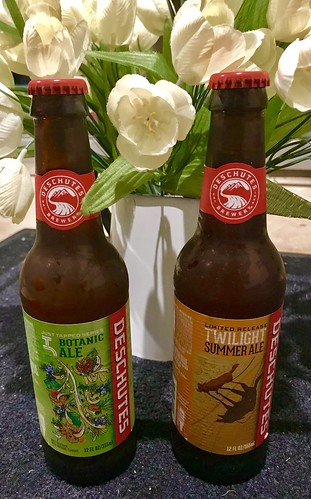 As far as perfect summer beers go, I think the Twilight Summer Ale may be near the top of this list. It is a nice mix of hops and malt and it’s golden pour looks like liquid sunshine. It’s super easy-drinking and refreshing. We have also actually featured a race in Bend with this beer’s namesake attached – the Twilight 5k (coming up again in August 2019), put on by Superfit Productions. This event takes place in the grassy field right next to the main Deschutes location on Simpson and will run on some paved trails near Farewell Bend and Riverbend Parks. Afterwards, stick around for a beer garden hosting this beer! Here is a recap of the 2015 event.

As the weather gets warmer, don’t forget to get your hands on this one.

If you aren’t a hophead, you may enjoy Deschutes’ latest from their Just Tapped Series is the Botanic Ale – a low IBU ale constructed from Pilsner and Rye Malt and Cascade Hops. For beers to vault into this series, they have to have done well on draft in the pubs – so this was obviously a fan favorite. I find that it still has some piney hop profile, but the real showcase is the citrus and botanicals (hence the name) that have infused the beer.