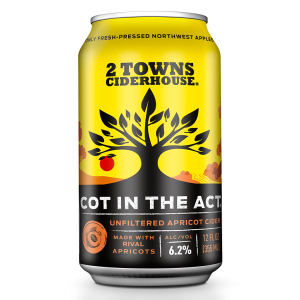 I love beer and cider. After now having visited over 465 different breweries, it’s fair to say I have sampled a lot of beer (follow me on Untappd). From post-race pints and run club meeting locations, to beer miles and relays, running and the kegged nectar seem to go hand-in-hand in Oregon. Our Kegs and Legs feature is where beer drinking runners like me can go to find some new favorite beverages.

We are back with another Kegs & Legs feature courtesy of the fantastic 2 Towns Ciderhouse in Corvallis. 2 Towns can be found all over the map, but has its humble beginnings rooted in the Mid-Valley since 2010. We kicked off our 2 Towns coverage with a couple of their staples – BrightCider and The Bad Apple and are back this week for a few fresh treats to have you reminiscing about summer.

Cot in the Act is a seasonal cider that showcases a nice marriage of apples and apricots (referred to as “golden eggs of the sun” by the Greeks). This cider is a fun treat in the winter, but definitely keep this on your list for when the warmer temperatures hit. It’s a fruit-forward summer cider that really hits the spot.

Pacific Pineapple is probably one of my favorite ciders out there. Ever. It is just delicious (and according to Untappd, I have drank it 15 times this year…). It is super tropical, a wonderful combination of apples and Costa Rica golden pineapples. I would honestly rather have a 6 pack of this 5% cider on a beach than an overpriced margarita or mai tai. 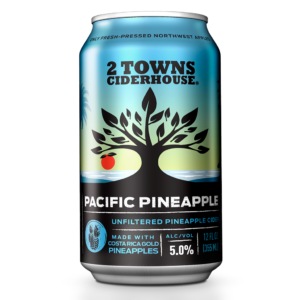 Here is some running info from our last post, in case you want to make a day trip of running and drinking:

If you haven’t been down to 2 Towns yet, I strongly encourage you to make the trip. I truly believe Corvallis is under the radar when it comes to awesome breweries and cideries, so taking a weekend to do a full tour would be worth your while. Their taproom is open every day at noon and is located just off Highway 34 (about 9 miles from the I5 junction).

Corvallis has plenty of great places to run, such as Bald Hill Natural Area (for dirt trails) and Crystal Lake Sports Fields and Kendall Natural Area (for paved trails). However, if you are looking to make 2 Towns your start and finish destination, there is a paved path that runs parallel to the highway (but separated via greenery) that can take you about 1.5 miles (one-way) east to Riverside Drive, as well as 1.5 miles (one-way) west to the Willamette River. You can easily get in about 6 miles by covering all that ground, and winding back up at the taproom. 2 Towns also shares their same complex with Mazama Brewing, so you have two fantastic options, just a door apart.