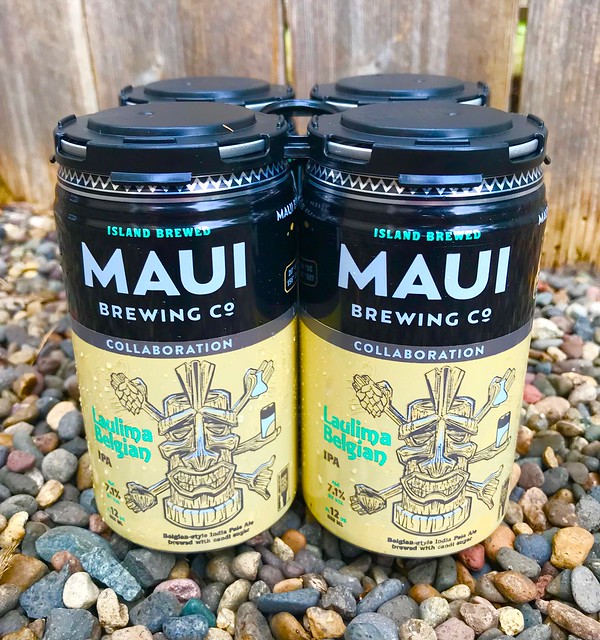 I love beer. After now having visited over 425 different breweries, it’s fair to say I have sampled a lot of beer (follow me on Untappd). From post-race pints and run club meeting locations, to beer miles and relays, running and the kegged nectar seem to go hand-in-hand in Oregon. Our Kegs and Legs feature is where beer drinking runners like me can go to find some new favorite beverages.

After recently getting back from a 6 day, kidless trip to Maui this past week, it seems fitting to feature Maui Brewing Company and their newes collaboration beer – Laulima Belgian IPA– for this week’s Kegs and Legs.

MBC actually has two spots in the island – this main brewing space and taproom (with 3 dozen beers!) in Kihei, as well as a more restaurant-style option on the western shore in Lahaina. When we arrived at the island in early October, our first stop after grabbing our rental car was to stop by their main facility for dinner and drinks. The area is huge, and seemingly growing. They just recently added their own on-site restaurant earlier this year, which is an added bonus.

I tried out over a dozen in their taster tray and my wife and I played a pretty competitive game of Uno while cruising through a nice variety. It was dark when we got there, so we missed the epic sunset that can be seen from the brewery, given its location up a bit in the hills above town. It is open-air indoor space, and the combo of the smells of island air with beer aromas make this truly an awesome spot and a must-stop for any beer lover.

While some of the best runs in Maui are obviously on the beaches or even on the long paved path flanking the Mokulele Highway that connects Kahului with Kihei, there are some good running spots near the brewery.

MBC sits at the end of Lipoa Parkway near the Maui Nui Golf Club. It’s a great spot for some hill work, as a Strava segment showcases a 4.7% grade for .5 miles from the main Piilani Highway to the taproom. There’s also a nice 4+ mile segment called the VIRR Group Run (obviously a solid option considering VIRR = Valley Isle Road Runners). You could get just over 4.5 miles in if you follow both of these – a great length to burn off some calories before downing a few tasty beers.

We were recently sent their latest collaboration brew – an IPA that was fittingly created with Breakside Brewing right here in Portland. This Belgian-styled IPA is brewed with candi sugar. Laulima is Hawaiian for “many hands working together“, a fitting name for those shared beer. The Beligian yeast makes this different from its American IPA counterparts that we know and love. This sort of style can get a bum rap at times, as some combos of the of fruitiness and American hops don’t play well together. I can be hit or miss when it comes to this style, but this collab is pretty darn good for the style. It has a dank resinous flavor profile and the citrus component is there, but not overpowering, making this a very well-balanced offering of the pineyness and fruit, that doesn’t get too complex for its own good.

Maui Brewing has expanded their distribution, and their cans are wildly available in the PNW. We recommend that you seek them out, and definitely consider planning a trip to the island to check out some from the source! It’s worth it!