When you have a three-day weekend, it’s the perfect time to sign up for a new race experience.

This past Memorial Day I joined in the ORRC Up the Lazy River 10K, a part of the ORRC 10K series. I really enjoy ORRC events. They are well-organized and always have an inviting feel, probably because of the all-volunteer leadership team. These men and women love runners and walkers, and want their participants to enjoy their race.

Up the Lazy River started and ended at Mary Young Park in West Linn. The first and last mile mostly overlapped, which meant that uphill at the beginning providing some downhill relief at the end. The rest of the course was a loop that took participants alongside the Willamette River and through neighborhoods. The course also goes alongside Marylhurst University (which is closing this fall, so it will be interesting how the community changes in the coming year). The three aid stations on the course had plenty of water and Gatorade, which was great as the sunshine came down. There were also plenty of signs along the course so you never had a doubt if you were going the right way. My favorite signs were the series of jokes, including “Pain is temporary…Online race results are forever.” Volunteers were at most intersections to help point the right way and stop the occasional traffic. It was an open course so there were some other runners and bikers around, but nothing that got in the way of the participants. 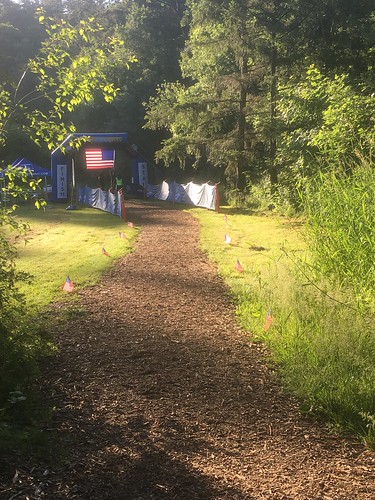 The final half mile of the course wandered through the park, going from sidewalks to paved pathways to bark trails. American flags lined the final stretch, with a large one over the finish line, in recognition that the day was about more than just running in the park. All kids race participants received their own flag, plus a red, white, and blue participant ribbon for their hard work.

About 5 minutes from the finish line was a pavilion area with drinks, snacks, and a banner set up for finisher’s photographs. I have never had an everything bagel with Nutella on it before, but it was amazing. That might be because I was sweaty, starving, and glowing from a 10K PR, but I’m going with it: Amazing! Finishers were able to check in right away to see if they had earned a raffle prize or award for top finishes in their age group. All of those touches reflect what I said before about the leaders obviously caring about the enjoyment of their racers.

All in all, Up the Lazy River was a great way to celebrate Memorial Day: being among families at the park, seeing a new part of the city, and challenging myself to try something new. I write this review grateful to those who gave their lives so that we could celebrate the freedom of this day.