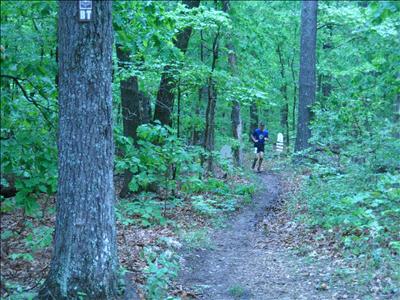 This post was submitted by Run Oregon reader Randy Grant.

”Missouri loves company.” I’ve always thought this wordplay would make a great name for a marathon (or longer) in the “Show me” state. Not just any marathon or ultra, but a real suffer fest; a race that because of terrain or weather would really test a runner’s mettle and allow one to embrace the suck. If the Berryman Trail Marathon ever decides to change its name, this would be a moniker worth considering.

By local weather standards, I couldn’t have asked for much better conditions. Temperatures started in the mid-60s and hit the mid-70s by the time I finished. The real nemesis was the humidity. Living for 6 years in Nebraska during graduate school made me familiar with Midwest humidity. Living the past 25 years in Oregon insured that I was not acclimated to it. I’ve experienced much worse than it was today, but not as a runner, and certainly not over that distance. The upside (mostly) is that the course ran through the shade of the trees; it was only disappointing in the latter half of the race, when the trees kept most of the rain from reaching the canopy floor and the runners who would’ve appreciated its cooling effect.

I started feeling the effects of the humidity in the second mile, suggesting I would be in for a long day. As expected, it wasn’t long before my minimal clothing was soaked to a level that would make Charles Fisher proud. And despite drinking lots of water (or at least I thought so), it wasn’t until sometime after the race I needed to do a hydration check (spoiler: the lovely shade of yellow-orange confirmed I was a bit dehydrated). 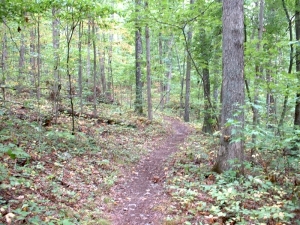 The course itself was challenging, but more for its cumulative effect than any individually dramatic features. The hills were modest, but there were lots of them, and they definitely added up. The path, which was about 99% single-track, didn’t seem too bad in terms of rocks and roots. Of course, just when I start thinking, “Oh, this isn’t too technical,” the course generally responds with, “Hold my beer.” I stumbled about a half-dozen times, but managed not to go to the ground.

Off of the trail was an abundance of poison oak and ivy. Having recently recovered from an onslaught of poison oak at the Trailfest in the Redwoods, I was not eager to repeat that experience. Fortunately, I managed to dodge any flora or fauna that might’ve been out to get me. Otherwise the scenery was lovely, albeit a bit repetitive.

So much for the misery, what about the company? The original plan was to run the event with the usually semi-reliable Tony Lai, but as he was sidelined with an injury, I was left to share the course with my fellow runners, none of whom call Oregon home. Most of the time I was by myself, with perhaps a runner or two ahead to reassure that I was still on the right path (or that if I was lost, at least I wasn’t alone in my wanderings).

Because I was mostly on my own, I was a prisoner of my own mind. Sharing my cell for most of the run was Bruno Mars’ “I think I wanna marry you” – the chorus playing over and over. After futilely attempting to get the song out of my head, my strategy turned to re-writing the lyrics. I ultimately crafted it into a song about running, though I don’t know if it’s Weird Al worthy as a parody. Who knows, with the right production crew, including someone who can actually sing, maybe you’ll see it on YouTube someday.

The Berryman Trail Marathon is put on by the St. Louis Ultrarunners Group, an organization that goes by the acronym “SLUGS” and has the logo to match. As a PNW native and mid-packer on my best days, this is a group that resonates. Slugs were a fitting metaphor for the day, as it took me just over 6 hours to complete this adventure. (I don’t yet have an official time; my Garmin came up short on mileage when I crossed the finish line, so I kept running, and that added a bit of time to the official record).

State #36 (and #44 overall) is now in the books, including everything west of the Mississippi River. New Hampshire is next on the list, slated for July, but we’ll see if anything else pops up in the meantime.