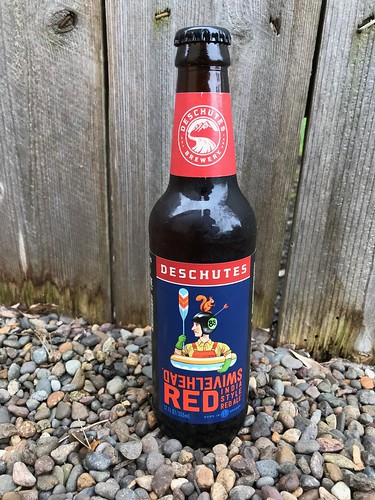 I love beer. After now having visited over 374 different breweries, it’s fair to say I have sampled a lot of beer (follow me on Untappd). From post-race pints and run club meeting locations, to beer miles and relays, running and the kegged nectar seem to go hand-in-hand in Oregon. Our Kegs and Legs feature is where beer drinking runners like me can go to find some new favorite beverages.

Last month we reviewed the new canned beer line from Deschutes Brewery and we are now checking out a bottle (available March – September) – the Swivelhead Red, and India Red Ale that I feel tastes more like IPA than red. Most of us are familiar with Deschutes, but here’s a little snippet from our previous post.

When I first looked at the label, my wife asked me to explain it. I did my best to attempt to describe it in what I thought it could mean, but it turns out there are hidden meanings behind the artwork. It turns out I only got one of the themes right (floating the Deschutes River), but there are a lot of unique ones that were fun to learn about.

Like I mentioned earlier, if Red Ales aren’t your thing this is a really good middle ground. It’s designed to keep drinkers thinking – it may look like a full-on red ale on first pour, but its smell and taste showcase that it is more of a twist on a traditional styling. There are 8 varieties of hops (!) that provide a nice combo between some light citrus (thanks to melon accents from Australian hops) and pine. The malt shines through but it is not overpowering – it helps nicely wash away the lingering bitterness and provides an overall refreshing finish. Overall, this is one of the more tasty and accessible IRA’s that I have tried.