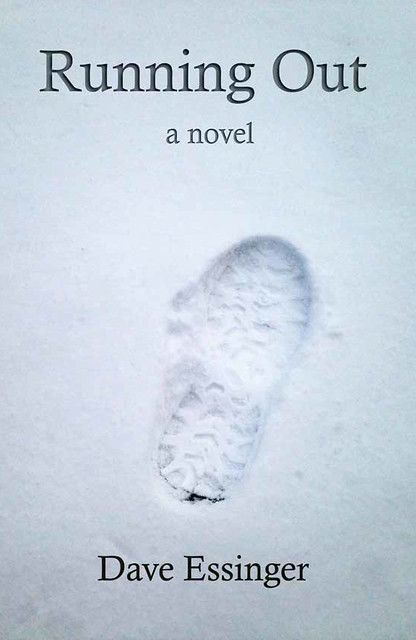 Note: If you haven’t yet read Running Out by Dave Essinger yet, you’ll probably want to do that before you read this Q & A … it gives too much away!

I recently posted my review of the book Running Out, which I thoroughly enjoyed and highly recommend. In this book, a former college athlete attempts to run through the Canadian wilderness – in winter – from a plane crash to find help that can save his wife and young daughter. Dan, the runner, is also a sports scientist that has done research into the limits of a runner’s abilities under the most trying conditions.

The book’s character development is very well done; Dan and his wife Deb are introduced through their actions and reactions to various scenes through the story, with very few blunt statements directly to the reader. As a result, they come across as complex people that are much more interesting than the black type on the white pages. And the story, while not something that would ever hopefully happen, is one could easily happen on any given day – maybe not in the specific setting in this book, but in a similar situation.

Normally, when I read a running book that I like, I just post a review on Run Oregon. In this case, I enjoyed the writing so much that I reached out to the author to get a little more insight on what was going on behind the scenes (and to selfishly request that he write another book). Here is a little more for your Running Book Club to spark discussion about the book, in Q & A format with author Dave Essinger:

Run Oregon: I have to admit, for most of the book I did not quite understand Deb and actually wasn’t sure I liked her. So  … do you like Deb?

Essinger: I do — but I know what her deal is, in backstory that largely does not surface in the book itself. I was surprised that some early readers reacted quite viscerally toward Deb, just hating her, and I took some specific steps to soften her up some after that. Bottom line, though, I don’t want her to be likable so much as plausible and complicated; she’s damaged, as we all are, and strong in some ways and oblivious in others; she has her tragic aspects, to me.
On a more superficial level, some of the tension between her and Dan represents some of the trails vs. roads running mentality out there. I mean, I’ll run anything, and I enjoy it all, but it amuses me how polarized the running communities can get about that issue, especially since we’re together all still such a small percentage of the world at large, with so very much in common, even as we fixate so obsessively on the differences. And that’s all another metaphor — for relationships, marriage, society — that was just too apt for me to pass up.

Run Oregon: How long did you have the idea for this book before you started working on it, and how long did it take you to write?

Essinger: Well, I pretty much always have a long fiction project (or two) in progress, and probably a few essays and stories and poems and screenplays, at any given time. I’ve been writing fiction for over twenty years now, and I may have gotten the idea for Running Out as long as ten years ago. My wife and I first started running ultras in 2008, and as the maxim goes, “write what you know.”  I noticed that there’s not a lot of great fiction about running in general, and about ultrarunning in particular, and it seemed like a topic I already enjoyed with a built-in audience. I had a fairly rough draft of the novel together before I took a research trip far up into northern Quebec, the amazingly remote location where the story takes place, and being there and seeing it in person was just essential to writing the place. I finished the manuscript over the next year or two, and spent some time shopping it around to agents and publishers before finally finding the right fit for it at Main Street Rag.  So the book had been “done” to me for a good couple of years before making its way to publication, which of course is a blindingly slow process most of the time.

Run Oregon: What was your previous knowledge of the science behind running/energy? Was it hard to balance the science so it didn’t get too detailed?

Essinger: Almost none! I stayed far away from the hard sciences in my undergrad, and researching this book forced me to go back and learn all of the biochem etc. I’d avoided all of that time. Really, though, it had become a deeply interesting subject to me as I’d started running longer distances myself, and seeing the real practical effect of what we can make our bodies do and how they work at these tiny levels, especially since there is still so relatively little study being done on extreme conditions like ultras. So I would have gotten this into the science of it even without researching the book, but my acknowledgments page is filled with thanks especially to the friends and colleagues from other disciplines who shared their knowledge.
I enjoy research in general, too, and past works have gotten deep into particle physics, kamikaze poetry, and weird medical conditions, among other things. In this case, my character knows his biology very well, so I had to too, but beyond that, I think there’s more connection between the aesthetic and the scientific than we often realize, and in this case, the science behind the progressive breakdown of Dan’s body just had too much metaphorical potential to pass up.
I had definitely been concerned about losing that balance, though, and getting far too scientifically detailed for some readers! That’s one reason those passages stay brief, and for any reader whose eyes start to glaze over at the technical terms, those can be frankly skimmable. It was the harder job, I think, writing so much about running completely and honestly in a way that wouldn’t be inaccessible to non-runners, but I hope the plot holds up for any reader.

Run Oregon: What is next?

Essinger: I really could tell Deb’s story, why she is the way she is. Or Susy’s (note: this is Dan and Deb’s young daughter), grown and maybe twenty years later. But unless some tsunami of public demand makes that an offer I can’t refuse, those are honestly far down on my list. I always have more ideas than time, and I’m currently deeply entangled in recording and producing the audiobook for Running Out. Going into that a few months ago, I knew as little about audio production as I used to about biochem. It’s a hugely time-consuming process, but it offers another opportunity for me to really control everything myself and get it right, and I’ve learned a great deal from it. I’m hoping to have the audiobook ready and downloadable to runners’ earbuds before the end of treadmill season!
After that, though, I’m looking forward to getting out of my DIY home-sound-studio-slash-blanket-fortress and getting back to the writing itself. I’m about 300-some pages into a sprawling post-apocalyptic fiction project, for which I’ve been turning this research compulsion (that’s becoming a real problem for me!) onto all kinds of wild, real-world conspiracy theories. Stay tuned!